Power of perception: How the US presidential race could impact student recruitment

“There is no truth,” said Gustave Flaubert. “There is only perception.” The legendary French novelist’s view of the matter will ring true for international recruiters who are routinely asked to respond to student and parent perceptions of different study destinations. One interesting aspect of this type of perception – by which we really mean the preconceptions or beliefs that students have of a given destination – is how it shifts over time, and how this in turn bears on the attractiveness of a destination. Recent history shows us that significant shifts in perception, in particular how welcoming or safe a study destination is seen to be, can have a material effect on student mobility.

Perception, we should add, was not the only factor in play during this time as more restrictive visa policies played a part too. And thanks to the hard work of Australian educators, recruiters, peak bodies, and government stakeholders, the situation has of course reversed itself in the years since. International enrolment has climbed steadily for the last three years and, earlier this year, Australia released its first-ever national strategy for international education: a ten-year blueprint to expand the sector that is remarkable in its comprehensive and coordinated approach to strengthening Australia’s share of the global education market.

More recently, perception has also come to bear on student mobility to the UK. Student numbers have been essentially flat there from about 2013, after declining in 2011/12 and 2012/13 for the first time in 30 years. There are again a number of factors at work, chief among them a drive to reduce net migration to Britain and a corresponding move to more restrictive visa policies for foreign students. But such policies are also important drivers of student perception. They have led students in markets abroad to see the UK as a less welcoming destination, and one less open to foreign students than it had been in the past.

The recent Brexit vote is likely to be a further lever for these beliefs, with polls indicating that the vote to leave the European Union would make the UK a less attractive study destination for both European and non-EU students. For the moment, one of the referendum’s immediate impacts is to add a measure of uncertainty or confusion for foreign students. British educators are now calling for greater clarity with respect to policies for inbound students, both as a practical consideration for those planning to study in Britain but also as to reinforce the country’s continuing commitment to welcome students from abroad.

The race for the US presidency

Looking across the Atlantic, the US presidential election looms large in global media coverage and the popular imagination. And here too we see the prospect for an event that may have already had an important effect on student perception.

Earlier this year, a large-scale survey of international students from FPP EDU Media and Intead explored how changing economic and political conditions would influence student decision-making for study abroad. The survey drew more than 40,000 responses from students in 188 countries, and was first presented at the annual NAFSA conference in Denver last June. One of its headline findings? Six in ten respondents said that they would be less likely to study in the US if Republican nominee Donald Trump wins the presidency this November.

Intead CEO Benjamin Waxman called the findings “jaw-dropping,” and, while acknowledging that inbound mobility would be unlikely to be affected to the full extent suggested by the survey, his firm has nevertheless estimated the upper limit of the potential economic impact of such a shift in the billions of dollars.

The election result could have an important effect in key Asian markets as well with significant percentages of Indian, Malaysian, Vietnamese, and Filipino students also indicating that they would be less likely to study in the US with Mr Trump in the White House. 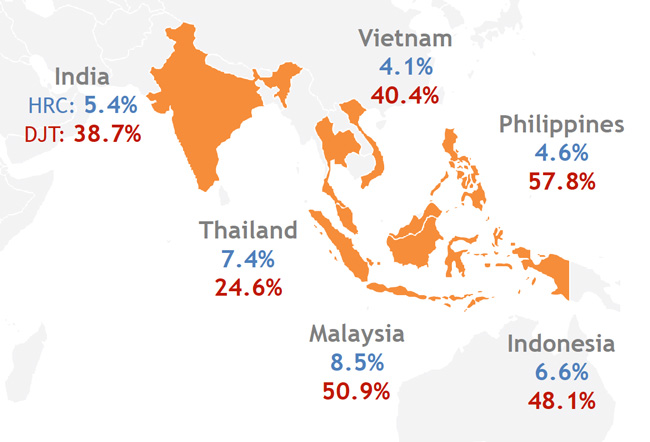 Percentage of survey respondents indicating that they would be less likely to study in the US under a Trump (in red) or Clinton presidency (in blue). Source: FPP/Intead

More recently, a smaller survey of 214 student counsellors and university representatives found that political climate, guns, safety and security, racial tensions, and cost were among the frequent topics of conversation with international students.

The survey was conducted earlier this year by officials with the National Association for College Admission Counseling (NACAC), and presented earlier this month at the annual NACAC conference in Columbus, Ohio.

Among its key findings, nearly two-thirds of respondents report an increase in “traditionally US-bound students” that were considering study options outside the US. When asked why, 80% cited cost as a factor. Four in ten indicated that the US political climate as their reason for looking elsewhere, and 33% noted concerns about guns, or safety and security generally, as their main considerations.

Zeroing in on the political climate, four in ten counsellors responding to the survey said that “the US election result in November may significantly change their students’ and families’ willingness to, or decision to, attend university in the United States.”

A word cloud reflecting the most-common terms used in write-in survey responses reflecting student concerns or questions about study in the US. Source: NACAC

“This is what we’re hearing, and this is what [the counsellors are] hearing,” said Meghan McHale Dangremond, associate director of admissions at Tufts University, and one of the panelists presenting the survey findings at the NACAC conference. “These are the conversations that they’re having on the ground. Our election process is on the mouths of 17-year-olds around the world.”

She added that the effects may be felt even if Mr Trump loses the election this fall: “There are perceptions about the United States that have been plastered all over the media that have been made very public that are not flattering.”

The implication in these recent survey findings is that popular perceptions of the US – as informed by the current political season or by media reports – may now be encouraging students to consider other study options to a greater extent. Given the profound effects that such shifts in perception have had for other leading destinations, this is likely to become an issue of growing importance for US educators and recruiters – one that may require a further consistent and coordinated response to reinforce the attractiveness of the US as one of the world’s premier study destinations.

This entry was posted in North America, Regions, United States.