UNESCO statistics indicate that gross enrolment ratios (the percentage of the college-aged population enrolled in tertiary education) have spiked over the last five years as well, from about 24% in 2010 to just under 40% as of 2014. This translates into nearly 42,000,000 students in tertiary education programmes in 2014, and compares to an enrolment of roughly 20 million in the US higher education that year.

The sheer scale and pace of expansion, however, is hardly the whole story. China has made substantial, targeted investments in the quality of its higher education, most recently through a new initiative called “World Class 2.0” (also referred to as the “Double World Class Project”). Announced in August 2015, the programme aims to strengthen the research performance of China’s nine top-ranked universities, with the goal of having six of those institutions ranked within the world’s top 15 universities by 2030.

The continuing development of the Chinese system will no doubt be one of the big stories in higher education over the next decade and more. But the effects of China’s massive investment in education are already being felt across Asia and around the world:

Along with its domestic priorities for economic and social development, it has become increasingly clear that China sees education as a means to expand and exercise its influence abroad. Most recently, this interest is reflected in the rapid expansion of cooperative links between Chinese universities and foreign partners.

In 2013, the Chinese government announced a massive development and foreign investment framework known as “One Belt, One Road” (OBOR). An invocation of the traditional Silk Road trade routes between Asia and Europe, OBOR aims to leverage China’s massive production and financial capacity through new projects and partnerships throughout Asia, Europe, and Africa. 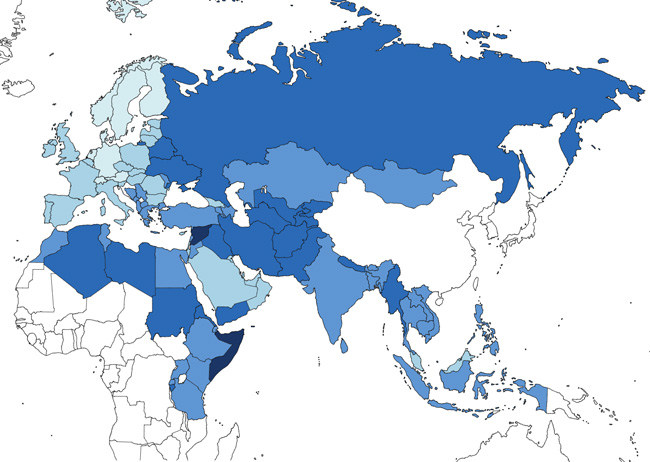 The geographic scope of the One Belt, One Road framework. Source: Economic Intelligence Unit

OBOR is backed by a US$50 billion investment fund and its framework includes an element focused on joint education programmes that has contributed to a growing network of more than 2,000 such links between Chinese institutions and foreign partners.

Simply put, OBOR makes concrete the government’s strategic focus on encouraging Chinese corporations and institutions to go abroad in search of new investments and new opportunities. “OBOR will cover nearly two-thirds of the world’s population and one-third of global GDP,” says a report from the Economist Intelligence Unit. “The initiative is a departure from broader trends in Chinese outbound investment, which is increasingly being led by private firms. At least in the initial stages, the state – China’s state-owned enterprises and largest financial institutions – will be leading the charge.”

The OBOR is notable as well for its close coordination between different levels of government as well as both state and private-sector actors. We might expect as a result that this massive investment in offshore ventures and partnerships, in combination with the dramatic continuing expansion of Chinese higher education, will lead to a considerable increase in new ventures between Chinese universities and foreign partners.

We might imagine as well that such academic links – whether in the form of combined research, joint programmes, international campuses, or other collaborations – will increasingly become part of a broader pattern of bilateral relations between China and its trading partners. As a 2013 research report on Chinese research and innovation noted, “For any country seeking to collaborate with China, ensuring a density and diversity of connections will be crucial, spanning the academic, research, commercial, trade, and cultural spheres.”

This entry was posted in Asia, China, Higher Education, Most Popular, Regions.