Early results point to continued growth for Australia in 2016

The latest round of Australian enrolment data shows that the notable growth trend of the last two years has continued into 2016. Department of Education and Training (DET) numbers through year-to-date (YTD) April 2016 reveal that international student enrolment is up 11.6% this year, compared to YTD April 2015. Commencements, meanwhile, grew by 11.8%.

At this early stage in the year, both values are tracking above the gains recorded for 2015 (10.3%) as well as the average annual growth rates for the past ten years (6%).

The school sector is the big gainer this year with 17.5% growth in commencements YTD April, and an overall enrolment increase of 16.1%. China continues to drive growth in Australian school enrolments, with a 24.9% increase in YTD commencements. All told, China accounts for 53% of all school commencements so far this year.

The vocational education and training (VET) sector is keeping pace with a 13% increase in both enrolment and commencements for YTD April. ELICOS enrolments, while at record levels early this year, grew more slowly. Overall enrolment in English language studies increased by 4.3% YTD April, and commencements by 2.5%.

“Members are reporting a broad range of experiences within this period though and only a small number reported numbers similar to the aggregate numbers,” says an accompanying commentary on the new DET data from English Australia. “Speaking to members across the country, English Australia has reports of April numbers from 25% below last year’s April number through to 40% over last year’s numbers. While university based centres mostly fared well for YTD April, both university-based centres and private centres are both equally varied in their experience with some of each faring well, while others reported flat performance and some are actually behind last year’s performance. Anecdotally, and based on comments of just a few centres, stand-alone ELICOS centres may have had a little more of a uniform experience with comments of ‘growth’ ranging between -5% and +5% versus last year’s April YTD figures.”

The top ten sending markets accounted for two-thirds of all commencements, across all sectors, YTD April 2016. As the following table indicates, the fastest-growing markets within this group are China, Colombia, Hong Kong, and Malaysia. 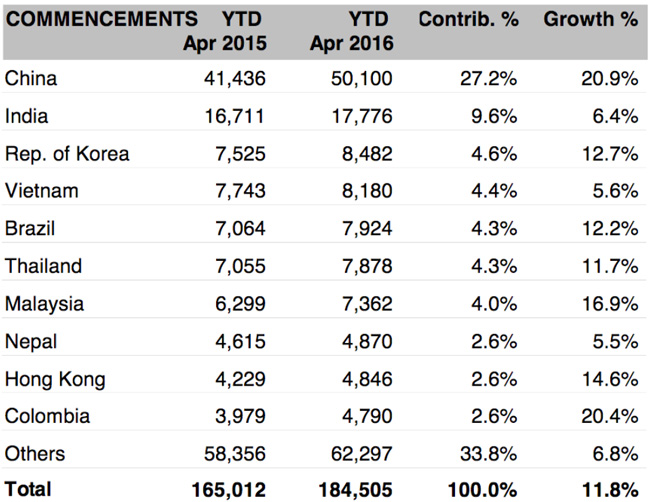 Enrolment in English studies accounts for 16% of all foreign students in Australia (YTD April 2016), as opposed to about 51% for higher education and 25% for VET.

But the ELICOS sector is also an important feeder for both VET and higher education programmes, and an earlier DET study found that ELICOS centres are the first study pathway point for two in every five international students in Australia’s tertiary sector. A closer look at trends in English language programmes, therefore, can yield some important insights for broader downstream enrolment trends.

The top 10 sending markets for ELICOS accounted for three-quarters of all commencements YTD April 2016, and the following table provides a fascinating summary of key source markets for ELICOS programmes over the past several years.

As the table reflects, five of the top ten recorded double-digit growth YTD April. This was offset, however, by significant declines in Vietnamese, Indian, and Italian numbers. Just outside the top ten, Saudi Arabia also fell off badly with a 39.1% drop in commencements through April.

These are important indicators of both immediate-term trends as well as broader patterns in Australian ELICOS enrolment. It should be said, however, that, drawn as they are from DET data, these statistics strictly reflect enrolments for student visa holders. A 2014 study found that only about two-thirds of all ELICOS students have an Australian student visa, with the balance engaged in shorter-term studies and/or travelling on another type of visa. A more complete picture of overall ELICOS enrolment can be found in the annual English Australia member survey, the most recent edition of which provides more comprehensive enrolment data for 2014.