Study finds growing use of agents among US universities

New research finds the pace of international student recruitment agency adoption by US universities has increased since 2013 – the year in which NACAC (the National Association for College Admission Counseling) repealed a previous ban on the use of commissioned international education agents.

All in all, nearly half of US colleges are directly or indirectly using international agents to help drive student recruitment. Roughly four in ten (37%) US universities now indicate that they work directly with international recruitment agencies, with one third (34%) having started doing so only in the last three years.

“This,” adds lead researcher Samuel Vetrak, “is roughly the level [of adoption] of other competing destinations from about five years ago.”

A further 12% of US institutions that do not directly work with agents report working with pathway partners, and, by extension, indirectly using their partners’ agent network to recruit students.

Institutions working directly with agents report that, on average, 22% of their international students are referred through agencies (this compares to 38% in the UK, 41% in Canada, and 62% in Australia). And most agents (81%) indicate that they are compensated by commissions on student referrals.

These are among the top-level findings from Pace of Adoption of International Student Recruitment Agencies by US Institutions, a new study released this month by Bridge Education Group and carried out by international research consultancy StudentMarketing.

The study draws on data provided 131 US institutions which together accounted for nearly 94,000 foreign students (or about 9.5% of the total international student population in the US). This survey data was topped up with in-depth interviews with industry professionals, both in the US and abroad, as well as a separate survey of 343 education agencies.

“People ask why we are doing this research,” said Bridge President Jean-Marc Alberola. “It comes from a curiosity about the pace of adoption. But also a fascination about the subject itself, and about the conversation [in the US] surrounding the use of agents.”

As the following chart reflects, the average number of agencies that US institutions are engaged with has grown steadily since 2012, and is expected to continue to expand through 2017. 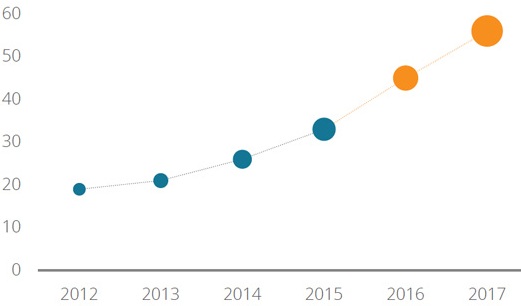 The average number of agencies US institutions worked with from 2012–2015, and plans for 2016-2017. Source: Bridge/StudentMarketing

Those institutions that work with agents are each currently engaged with an average of 33 agencies. They plan to add an average of 11 new partners in 2016 and then 12 more in 2017.

“Historically, we’ve seen about 20-30% of institutions reporting that they work with agencies,” said NACAC Director of International Initiatives Eddie West. “Insofar as NACAC has some influence on the admissions environment we were mindful that our decision to officially permit [the use of commissioned recruitment agents] would likely result in more institutions deciding to work with agents…I would say the slight growth from 20-30% to 37% could be argued as a healthy sign. It has not been explosive growth; it has been measured growth.”

In a sign of further adoption growth to come among those responding institutions not currently working with agents, roughly half (46%) expected that they would do so in the years ahead. This finding, while drawn from a small sample in the Bridge/StudentMarketing study, is echoed by a broader NACAC survey this year in which about 30% of US institutions not currently working with agents indicated that they were considering doing so in the future.

Those responding universities that do not currently work with agents noted a number of reasons for not doing so. The most common responses – concerns over reputational risk or compensation costs in particular – remain at the core of the discussion around agent usage in the US.

Reasons US institutions do not use international student recruitment agencies. Source: Bridge/StudentMarketing

Balanced against such concerns is a growing awareness of the valuable role that agent-partners can play. The report adds, “The most common reason cited for working with agents is the intersection of the desire to recruit international students, and a recognition that, in many instances, the most effective way to do so is via in-country representation by a third party…In successful partnerships, agents act as a ‘cultural middleperson,’ who understands the US educational system, the school they represent, and the local market.”

When asked what credentials or qualifications they seek in agent-partners, responding institutions indicated a variety of responses as reflected below.

Which of the following credentials do you consider to be valid in your agent partner selection process. Source: Bridge/StudentMarketing

Interestingly, however, a clear majority of agent-respondents (72%) reported that the main qualification requested of them by US universities was “references from other US institutions.”

The question of transparency

The report was launched at a special panel discussion at the annual NAFSA conference in Denver (30 May to 3 June 2016) where nearly all of the panelists emphasised the importance of transparency in institution-agent relationships. There are a number of aspects to the concept, but, in terms of the conversation around agent usage in the US, it often focuses on disclosure of details of the university-agent relationship by the universities themselves.

At the most basic level, proponents of transparency argue that universities should publicly disclose the agencies they work with. There are few hard and fast conventions at this relatively early stage of agency adoption in the US, however, and the report notes there is some debate even on this point. “While most seem to agree that the baseline for transparency begins with disclosure of a (commercial) relationship between the agency and university, there is no unanimous agreement on which characteristics of the agreement should remain commercially confidential. Disclosing actual commission rates and compensation models paid to agents, for example, are seen by many to equate to a disclosure of trade secrets.”

Finding an appropriate and workable level of transparency in agent-educator relationships will be an important feature of the continuing discussion around agent usage in the US. NACAC’s Statement of Principles of Good Practice remains the most important regulatory framework in the US and it clearly sets the tone in this respect by establishing that, “Members who choose to use incentive-based agents when recruiting students outside the US will ensure accountability, transparency and integrity.”

These important considerations, in combination with the strategic internationalisation and recruitment goals of US institutions, will no doubt continue to shape the patterns, practices, and pace of growth in agency adoption in the US.