Indian outbound to key destinations up 18% in 2015

The number of Indian students going abroad to study grew by just under 18% last year, marking a second year of strong growth in outbound numbers. 2015 was also the second straight year in which growth from India outpaced that of China, and these two key sending markets continue to have a profound impact on overall enrolment trends in major destination countries.

Nearly 85% of outbound students from India are destined for five countries: the US, UK, Australia, Canada, and New Zealand. The number of students heading to the UK has fallen sharply in recent years, and was down by 10% between 2013/14 and 2014/15 alone. “The UK is no longer a key destination,” says a recent tracking study from M.M Advisory Services, Indian Students Mobility 2016: Latest Trends from India and Globally. “[Meanwhile,] Australia and New Zealand continue to strengthen their position as the top choice for Indian students outside of North America.”

The report makes the point that Chinese and Indian students together account for nearly half of all international enrolment in the US, and roughly four of ten foreign students in both Canada and Australia. 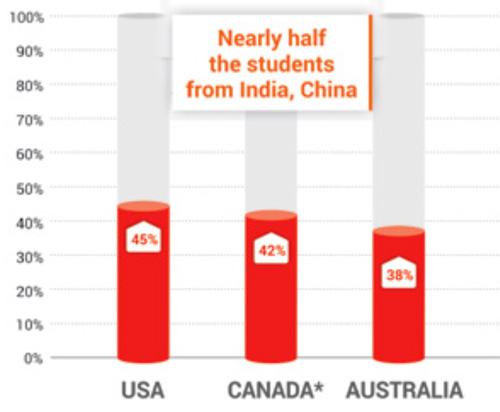 India has also emerged as an important growth driver for key destinations. With the exception of the UK, the pace of growth in Indian enrolments was greater than the overall growth rates recorded by the US, Australia, Canada, and New Zealand. If this trend persists it will indeed see India playing a more important role in driving overall enrolment levels, particularly if the slowing growth that we have observed in China over the last two years continues as well. 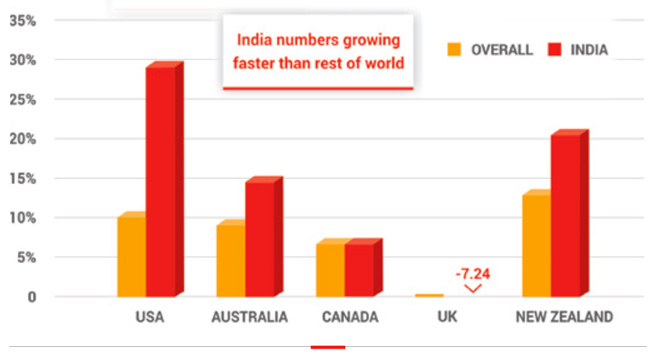 The US alone saw just under 30% growth in Indian enrolment (29.4%) last year, with Indian students accounting for 13.6% of all foreign enrolment in America in 2015. Looking behind the numbers, there was a significant event in last year’s enrolment in that undergraduate studies also saw a big surge. After five consecutive years of declining undergraduate numbers from India, the US saw a 30.3% increase in Indian undergraduate enrolment in 2015 – the first time in several years that Bachelor degree students even came close to keeping pace with the skyrocketing growth in graduate enrolments (which were also up 39.3% in 2015).

That surge in US enrolment will now likely take some of the momentum away from Canada, which has been the biggest net gainer in Indian student numbers among leading destinations over the past six years (that is, 2009-2015). Canada’s average annual growth over that period has been 7.1% (compared to 6.5% for Australia and 5.6% for the US). M.M Advisory adds, “What’s evident from this year’s gains analysis is that a buoyed US is going to be the biggest threat to growth for both Canada and a resurgent Australia…[The] US pulled significantly more from India in 2015 (29%), while India’s overall numbers to top countries have only grown by 17%. US additional growth will be at the cost of other countries. Sure, UK continues to cede ground, but with Australia staying on a strong upward trajectory in 2015, Canada is the market that is most likely to get impacted by US.”

Outside of the major English-speaking destinations, China and Germany are both taking shape as important emerging destinations for Indian students. While overall student volumes for both remain relatively modest (11,655 Indian students in Germany and 16,694 in China in 2015), their year-over-year growth rates are impressive and each saw growth of 23–24% last year alone.

Outlook for the future

“The undergraduate market is beginning to come on its own. The graduate market is showing strong growth. China is still about twice as large as India, but the growth momentum is with India now,” says M.M Advisory Director Maria Mathai. “The options available for students have increased significantly, so has the ability of parents to fund their children’s international education.”

For additional background on Indian market trends, please see “US universities see 32% increase in Indian enrolment in 2015” and “India driving growth in applications to US graduate schools.”

This entry was posted in Asia, India, Regions.