Malta ELT enrolment down slightly in 2015

An annual survey of Malta’s English Language Teaching (ELT) sector finds a modest decrease in enrolment for 2015. The 2015 FELTOM ELT Industry Survey Report, prepared by Deloitte and drawing on data from the National Statistics Office, indicates the number of student weeks fell by 2.9% from 2014 to 2015, while student arrivals decreased by 2.6%.

The following graphs reflect a longer-term trend of fluctuating student numbers – which, at 75,524 for 2015, remain off the recent-year peak of 81,911 in 2012. They illustrate as well a general upward trend in total student weeks, with some marginal year-over-year declines, as is the case this year, which offset years of more substantial growth. 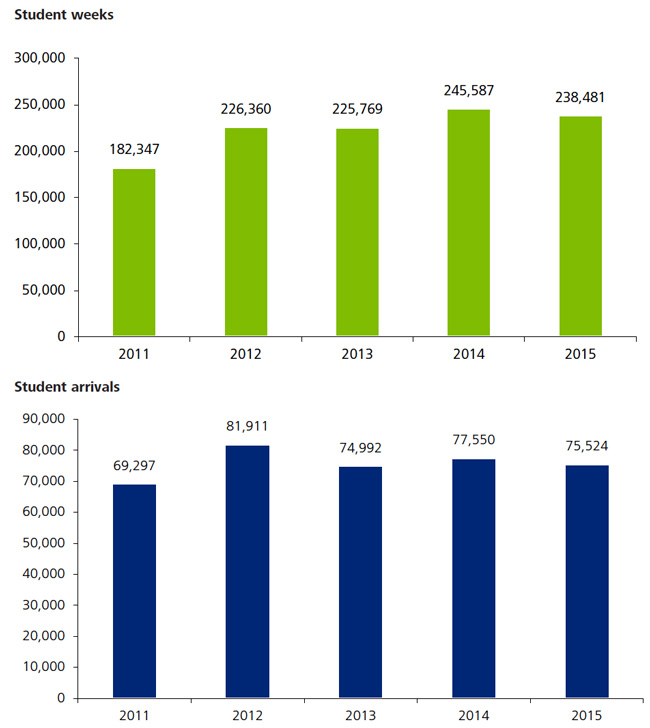 The junior market remains a significant factor in Malta’s ELT enrolment, and accounted for 48% of arrivals in 2015. This continues a recent-year trend that previously saw the percentage of junior arrivals (those 17 years old or younger) increase from 40% to 45% between 2013 and 2014. Younger students, however, book shorter study programmes – 13 days on average in 2015 as opposed to an average stay of 31 days for adult students – and so even as their absolute numbers continue to increase, the percentage of student weeks they account for has remained fairly constant (25% in 2013 and then 27% in both 2014 and 2015). Adult learners, meanwhile, represented 52% of arrivals in 2015 but 73% of all student weeks.

In terms of sending markets, students from European Union/European Economic Area countries accounted for half of all student weeks in 2015, with the other half booked by “third country nationals.” Italy and Germany – both of which were off slightly in 2015 – remain the big European senders and together accounted for nearly 43% of student weeks booked by EU/EEA students last year.

The big story in 2015 was a dramatic decline in student bookings from Russia and Libya. Russia is the fifth-largest sending market for Malta ELT and it was down 40% last year (from 28,461 student weeks in 2014 to 17,032 in 2015). Libya was the sixth-ranked sender in 2014 at 25,013 weeks. It slipped to seventh place in 2015, with student weeks dropping 44% to 13,979. Deloitte attributes these dramatic declines to “political and economic factors” in both countries.

Also of note is that these major declines were offset by significant growth in weeks booked by students from Brazil (+64%), Colombia (+44%), Turkey (+24%), Czech Republic (+87%), and South Korea (+34%). “The main growth markets were in fact from outside the EU/EEA area,” adds Deloitte. “In 2015 these main growing markets accounted for approximately 37% of total student weeks registered by the industry.”

Outlook for summer 2016 and beyond

Malta’s ELT sector generally positions against the UK as its primary competitor, and Maltese providers are watching currency rates and political developments closely this year in the lead-up to the key summer season.

Summer bookings accounted for nearly half (48.7%) of all student arrivals in Malta in 2015. This year, ELT providers are noting a recent weakening in the British pound and the upcoming Brexit vote as factors that could shift some demand to the UK.

In a recent interview with the Times of Malta a FELTOM spokesperson said there was concern that a depreciation in the pound relative to the Euro could “encourage agents to send students to the UK as opposed to Malta”.

“At the moment this shift is not yet being felt for the simple reason that sterling started taking a downward turn only recently,” he added. “However, we are sure that if this pattern persists, especially if a Brexit occurs, tour operators and agents will be even more inclined to opt to send students to the UK as they have always done every time sterling weakened.”

Aside from relative exchange rates, applicable sales, or value-added taxes (VAT), are another aspect of competitive position for Maltese providers this year. Students are required to pay a 7% VAT in Malta on courses and accommodation, and up to 18% on other good and services purchased during their stay. In the UK, meanwhile, there is no VAT on course fees. This sharp discrepancy has led FELTOM, the peak ELT body in Malta, to recently renew its calls for VAT exemptions on ELT tuitions and related services.

“More favourable VAT exemptions as exist in other destinations on tuition and services as well as simplified and more efficient procedures when it comes to issuing of visas can give the sector a much needed competitive boost,” said FELTOM CEO Genevieve Abela at a recent press conference.

More broadly, FELTOM has also called for greater collaboration between the ELT sector and government in order to strengthen the country’s competitive position as a study destination. As it stands, Malta remains the seventh most-popular destination for ELT students (after the US, UK, Australia, Canada, Ireland, and New Zealand). As the 2015 figures illustrate, however, the sector is well established and stands as a significant export sector in Malta. Deloitte puts total 2015 spending by ELT students in Malta at approximately €161 million (US$184 million), which equates to roughly 9.8% of total tourism spending in Malta for the year.