Demand for English Language Teaching (ELT) in Chile is strong, largely driven by the need for English-speaking professionals, academics, and technicians to staff its increasingly internationalised industries. Chile has a large economy fuelled by mineral production, particularly copper. However, the government sees economic diversification as the path to a more prosperous and stable future, and education policy as a key component of achieving this goal. Part of this policy is a move toward a fuller integration with the global economy, and toward bilingualism, with English as the primary second language to be adopted.

In 2003, the Ministry of Education (MINEDUC) launched Programa Inglés Abre Puertas, or the English Opens Doors Programme. This initiative was specifically enacted with economic development in mind, and its goal was to give all young people at least some proficiency in English. It was aimed at all students, but centred on those who were disadvantaged. The government thought this would boost the country’s global competitiveness, reduce inequality, and democratise opportunities for young Chileans.

However, by 2010, TOEIC Bridge test results indicated that only 11% of grade 11 students had reached A2 or basic level in English. While this was an improvement on the 5% result from 2004, the government had hoped A2 level would be reached by grade 8 students, and that grade 12 students would reach B1 or independent level by 2013. In addition, outcomes differ radically between rich and poor communities, mainly due to the fact that private school students begin learning English earlier and benefit from more teaching hours.

Data from EF Education First charts Chile’s efforts to raise its proficiency. In 2011 the country ranked 36 of 44 surveyed, with “very low” proficiency. 2012 and 2013 saw increases that pulled Chile’s ranking up to 38 of 52, then 44 of 60. But in 2014 Chile landed in 41st place out of 63 ranked nations, and 2015 brought a ranking of 36 out of 70. These results are relative to other countries but Chile’s overall proficiency has increased in five years from “very low” to “low,” moving it past nations such as China, however on the whole other countries in the survey are also improving.

The English Opens Doors Programme (EODP), meanwhile, had challenges from the beginning. It was launched during a time when the Chilean education sector was dealing with inequality in access, inconsistent quality, and a countrywide teacher shortage, especially in rural regions. On top of all that, teacher funding has always been and remains a problem. Under budget guidelines, the government pays teachers for a minimum amount of hours, but any accumulation beyond that threshold must be paid for by individual schools.

At the university level, high levels of autonomy left schools outside EODP’s influence. The Ministry of Education introduced a set of guidelines for English teachers, but the standards were considered by some observers to be higher than those attainable by many schools. A lack of communication concerning teaching methods and curriculum also created problems.

EODP has been refined since to focus only on municipal schools in 15 regions. The Ministry of Education and local authorities have worked together to identify areas where the programme can be most effective, and reoriented those schools to maintain a special focus on English.

For many critics of the EODP, the main concerns revolve around national sovereignty issues related to widespread penetration of English, the potential extinction of the many indigenous languages in Chile, and the marginalisation of other world languages, which could in turn present barriers to creating fully rounded and globally engaged citizens. Yet people are keenly aware that employment barriers exist for those with limited or no English skills. According to the British Council, EODP is considered a success by its proponents, despite its shortcomings.

English and the people

Despite the logistical problems EODP has faced, an awareness of the benefits of English in the globalised economy has spread among the general population. A widely publicised study by the British job recruitment and employment agency Adecco showed that English speakers earned about 30% more than non-English speakers, and further survey data compiled by the British Council gives a clear picture of how English proficiency correlates to income in Chile. 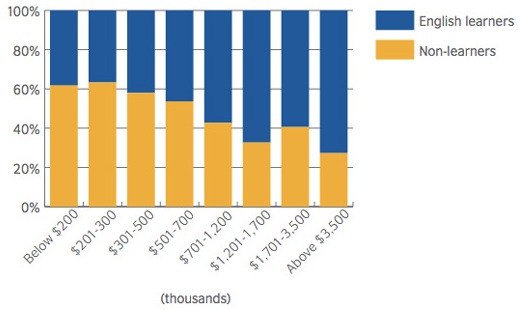 The link between household income and English proficiency in Chile. Source: British Council

The British Council asked Chilean speakers of English when they had learned the language and found that most had taken mandatory classes across various educational levels. Just over half (51%) had studied it in primary school, 70% at the secondary level, 59% at the undergraduate level, and 1% during postgraduate studies. The survey also showed that 3% learned it as students or teachers overseas, 4% while travelling overseas, 5% while participating in a government-funded programme, and 6% through their job.

Only about 20% of respondents said they had studied English at a private language school. Chile is home to numerous private English providers, but generally only upper and middle class students have the means to enrol at such schools. Online learning provides an alternative, however data shows that such methods are best suited for older students who possess the discipline for self-study. For younger learners, online language learning can be a challenge.

The British Council also looked at the other side of the equation, querying those who hadn’t learned English. The survey allowed respondents to select up to three reasons why they hadn’t learned the language. Those results appear in the chart below. 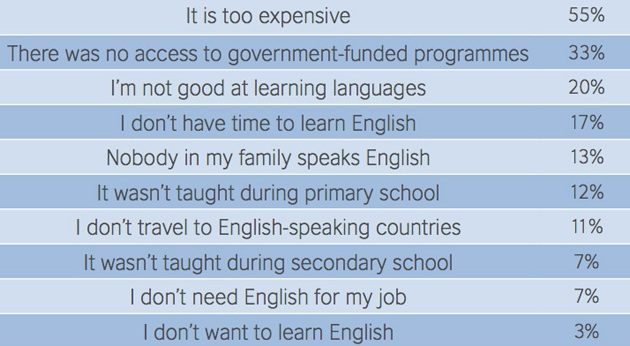 When non-learners were asked to choose up to three reasons why they would learn English, the vast majority (82%) said they would do it improve their employment prospects. Smaller percentages said they would do it travel abroad (53%), if classes were free (42%), to improve quality of their lives (35%), to consume English media (19%), to emigrate (18%), and to improve social status (16%).

British Council also surveyed Chilean employers and found that while 85% of companies communicated internally using Spanish, 15% used English. Most of those companies were in the business of education or language training. When asked which languages were used externally, 88% used Spanish, but 38% used English as well. This group was concentrated in the hospitality, entertainment, and restaurant industries, though education, accounting, architecture, and recruiting also made up a significant portion.

Echoing the relationship between income level and English proficiency, data also showed that managerial staff at responding companies had significantly higher English proficiency than non-managerial staff. Just over a third (34%) of respondents reported that more than 70% of managers were proficient in English. More than nine in ten managers (94%) agreed that English was an essential skill for managerial staff. The survey also asked how important English was to specific roles within companies. The results of those responses appear in the chart below. 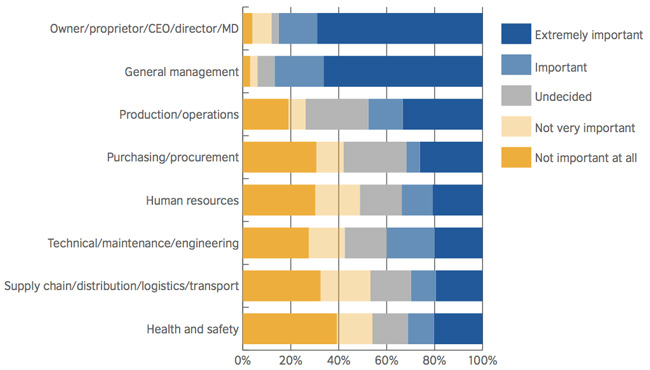 The importance of English proficiency for selected fields and levels of employment. Source: British Council

Another important facet of English in Chile highlighted by British Council survey is the role that exposure to the language plays in learning. There are few opportunities in Chile’s far-flung rural reaches to practice speaking, reading, and writing English. The country boasts the highest internet penetration in Latin America, which helps bridge geographical distance in terms of English exposure, but even so only about 65% of the population is connected. That’s at the low end within the OECD, of which Chile is a member. By contrast internet penetration is at 95% in Sweden, 85% in the US, and 75% in Barbados.

Chile’s geography has presented special challenges to government plans to increase English proficiency. Extending 4,300 kilometres north to south, much of the country is remote and mountainous, which presents obstacles to implementing policies evenly nationwide. Transport can be problematic. In smaller schools students are often taught in classes with no regard for age or grade, and in some areas school attendance is low. All of these characteristics present problems to administering quality English training.

Despite some problems in Chile’s ELT sector, demographic and market forces point toward overall demand for English increasing in coming years. However, Chile is one of the most economically unequal countries in Latin America, which means the best opportunity for international educators to attract a full spectrum of students lies with scholarship programmes such as Pingüinos sin Fronteras (Penguins Without Borders), a programme for secondary school students established in 2013, Semillero Rural, which focuses on vocational and technical training (especially in the agriculture sector), and BECAS Chile.

Families may have an uptick in available funds for education if President Michelle Bachelet follows through on her promise to ensure free education for all. She had initially announced a March 2016 timeline for achieving this goal, but at the moment only 14% of students in the poorest households attend university tuition-free, according to a study by Confech. Just weeks ago 120,000 students marched to demand progress on the free education front, as well as protest school privatisations and high student debt.

The government’s programme, however, hit another roadblock when Chile’s Constitutional Court blocked part of the free university proposal, necessitating changes to the plan. President Bachelet now promises that 70% of students will be receiving free higher education by 2018, and that universal access will be achieved in 2020.

Education costs are no small matter in Chile. For those who find themselves outside the free-tuition scheme Chile remains one of the most expensive countries in the world in which to obtain a standard bachelor’s degree, when cost is measured as a percentage of household income. This means parents often take on crippling debt in order to pay for higher education-and is one reason the free-tuition movement has enjoyed up to 81% support for the general public.

Chile’s education reforms, while not directly focused on English proficiency, will ultimately change how language teaching is administered. Some of the new policies will place pressure on private schools, which could affect cost at these institutions in a way beneficial to the general population. The EODP means that English will be taught sooner and in more communities, while nationwide free university tuition, if it comes to pass, will boost learning opportunities for college students. All that to say, the expansion of English Language Teaching and English proficiency in Chile is destined to accelerate.