A new report from the UK Higher Education International Unit describes a fast-growing market for international undergraduate students, one that has seen enrolment in major destination countries grow by 30% between 2007 and 2014.

Released on 9 December, International Undergraduate Students: The UK’s Competitive Advantage echoes some of the findings of other recent reports with respect to the continuing global growth in demand for higher education. It follows two earlier companion reports from the HE International Unit that have looked at postgraduate students and postgraduate research (aka doctoral) students, and is notable for its sharp focus on undergraduate trends.

Drawing on a variety of official data sources in the major destination countries, along with its own modeled estimates, the report calculates that the US received the most foreign undergraduate students in 2013/14 with 370,724 students hosted that year. The UK was second in terms of international (non-EU) undergraduate numbers with 152,355, followed closely behind by Canada and its 146,340 foreign undergraduates. Australia received 120,154 undergrads in 2013/14, Germany 55,825 (again, from outside the EU), and New Zealand 44,500.

These countries make up the competitive set of destinations considered in the report, and its observations are largely confined within this set. As such, it does not reflect market shares or shifts in other emerging destinations, such as China or Malaysia, which have come to play an increasingly important role as well and particularly so within their respective regions.

The report notes that while each country in the competitive set registered increases in undergraduate enrolments between 2007/08 and 2013/14, there were some distinct differences in growth rates and relative share of market over this period. The following table summarises these changes, and it reveals a number of interesting insights:

Underlying these findings is the further distinction in provisioning among the major destinations in that, “Most UK undergraduate honours degrees take three years compared to four in the US, Canada, and Australia, meaning that the UK recruits and graduates more students each year relative to the total number studying at any one time, and does so with fewer years’ fees and faster access to the labour market for students.” 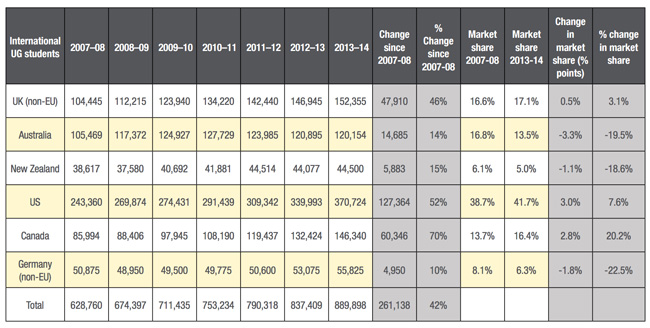 As the table also indicates, Australia, New Zealand, and Germany, while experiencing growth in terms of absolute student numbers, each registered declines in relative market share of about 20%.

The report suggests that Australia’s declining share over this period was due in part to the strength of the Australian dollar. It notes, however, that shifting currency values have now again made Australia a more affordable destination and that this, combined with a number of recent policy changes, has resulted in an uptick in undergraduate enrolment growth for 2014/15.

New Zealand has seen a similar correction in terms of currency exchange, also resulting in stronger growth for 2014/15, and too has taken steps in terms of policy and coordinated marketing in major education markets in recent years.

The HE International Unit characterises the US as a “sleeping giant” – suggesting that the clear market leader has not yet introduced coordinated policy measures or undertaken active recruiting to the same extent as other destinations.

But it notes as well that the US has seen strong growth in undergraduate enrolment since 2007 and that this can be attributed to “increased efforts by US universities to internationalise and to expand their sources of revenue as domestic demographics reduce local recruitment potential in many regions.” Indeed, previous analysis from World Education Services (WES) points out that the relatively small proportion of international students in US undergraduate programmes leaves American institutions with considerable room to grow those enrolments further (WES puts the proportion at 2% of total US enrolment for 2013, whereas the latest Open Doors puts it at 4.8%).

Canada’s strong growth since 2007, meanwhile, is attributed to its national strategy to grow its international enrolment and to a particular focus within that strategy on building undergraduate student numbers.

And Germany’s modest non-EU enrolment growth over the past several years may also get a boost going forward. “While there are significant language and cultural barriers to studying as an undergraduate in Germany, the progressive removal of student tuition fees by regional governments may mitigate against this factor. Similarly, universities are being encouraged to expand language and cultural integration activities for international students, which may also improve the ability of German universities to attract international undergraduate students.” 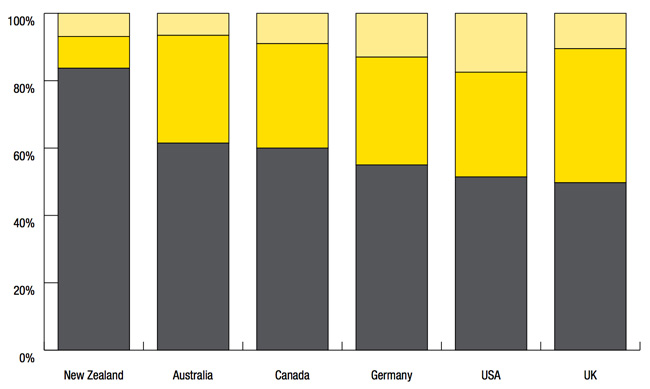 In the US and the UK, the two leading destinations, undergraduates account for just over half of total international enrolment. In Canada, Australia, and New Zealand, however, the share of total enrolment ranges between 60-80% or more, indicating that overall enrolments in these receiving countries are more susceptible to undergraduate trends and will respond more sharply to increases (or decreases) in undergrad numbers.

But if undergraduate enrolment is an increasingly important international student trend in many receiving countries, what are the factors that influence the choice of institution and destination for these students and their families?

The HE International Unit report offers some important insight in this respect and begins by making the case for differentiated marketing approaches for prospective undergraduates. “International [undergraduate] students make up a specific cohort which requires tailored strategies,” it notes. “Because they are generally younger than postgraduate students and typically reliant on family funding, their decisions and those of their parents are highly sensitive to the perceived quality of provision – as reported most authoritatively by current students – and the anticipated future value of their investment…How the quality of provision and support, plus measurable outcomes, are framed for prospective international UG students is becoming more important.”

In the following table, we see a comparison of key influencers on students’ study abroad decisions for the same competitive set of receiving countries. The report finds generally that undergraduate students tend to be more influenced by family and friends than is the case for postgraduate students, and it notes that digital and social channels now play a very influential role in undergraduate recruitment as a result.

There is also an indication that prospective undergrads are more heavily influenced by institutional rankings. However, the comparative table below suggests this is particularly relevant in the UK, where the data suggests it plays a greater role than is the case for other destinations in the competitive set, and the report cautions generally that, “[University] reputations are increasingly defined and re-defined in real-time by students who are reporting instantly via social media and direct communications.” 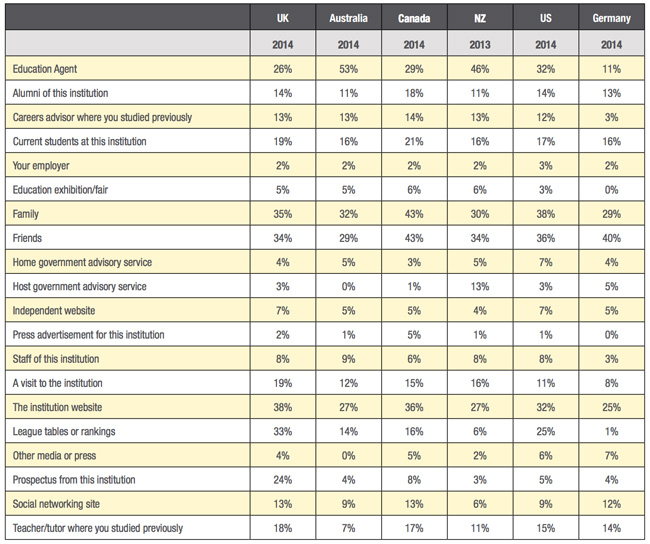 As we see in the table, after friends, family, and – interestingly – institutional websites, education agents have a major influence in student decision-making across all destination countries. Further, agents play a particularly significant role in some of the world’s most important sending markets. “For students from the UK’s leading student source country – China – a distinctive pattern of influence is apparent. Here education agents, in tandem with family and friends, play a much more influential role. Similarly, students from Malaysia, Nigeria and India identify agents as key influences. This is a trend that is difficult to discount.”

Student perspectives on study in the UK

The report draws on a large sample for its findings regarding influences on student decisions in the form of student survey data from i-graduate’s International Student Barometer (ISB). It gathers ISB survey responses from 365,754 international students, including 28,323 international undergraduate students in the UK for 2014/15 alone.

Among those students, the main factors in their decision to study in the UK were institutional reputation, the specific course of study, earning potential, and personal safety. “Interestingly, cost of study, cost of living and opportunities to work were rated relatively lower as decision-making factors, despite these appearing as more significant concerns in later satisfaction data,” adds the report. “This suggests that although financial issues are not primary in decision-making (being more rightly centred on institutional quality and course offerings), this does become more significant for undergraduate students once they are living and engaged in study in the UK.”

The survey data also highlights a very high level of satisfaction (91%) with UK higher education among international undergraduates. Indeed, based on the comparative data provided by the ISB, the UK had the highest satisfaction ratings within the competitive set of receiving countries across all the aspects of the student experience: overall satisfaction, learning, living, support and arrival experience.

As the following table indicates, however, the major receiving countries tend to score within a relatively narrow band – that is, the various category scores are consistently competitive among the major study destinations.

Based in part on the UK’s leading performance against these satisfaction metrics, the report argues that its comparative advantage rests in the quality of education provided by British universities, but also with an acknowledgement that the UK’s market share has stagnated over the past several years. It concludes by offering a variety of policy and strategy recommendations in response, including the value of improved visa services, expanded post-study work rights for international graduates, increased engagement of education agents, and a greater focus on promoting student outcomes.