Nepal emerging as an important growth market for international education

Demographic and economic shifts in Nepal, mirroring those occurring in other Asian nations, have resulted in a sharp increase in the country’s under-25 population and a rise in middle class incomes. As a result, record numbers of Nepalese students have been opting for foreign education. Our previous market profile touched upon Nepal’s higher education system, market potential, and economic challenges. Today we return for an updated snapshot of a country that has changed drastically in the last two years.

Nepal was hit by a 7.8 magnitude earthquake in April 2015, and subsequently endured as many as 120 aftershocks. Monsoon season arrived shortly afterward, causing mudslides and flash floods.

All told, more than 8,000 people died during the disaster and millions more were displaced. Higher education enrolment numbers in all areas will doubtless decline, but updated data on this has yet to emerge. However, damage to education facilities included the full destruction of National Administrative College, Saraswati College, and Universal College, as well as the collapse of the main administrative building at Tribhuvan University, one of the world’s largest higher education institutions.

Before the earthquake, Nepal was an international education market of growing importance. The full effects of the disaster and its aftermath are not yet known. What is clear, however, is that Nepal’s mobility numbers had been growing steadily in recent years. The Ministry of Education shows that there was a record-high of 29,380 students who had applied for a no-objection letter (effectively an application for permission to study overseas) between June 2014 and June 2015. 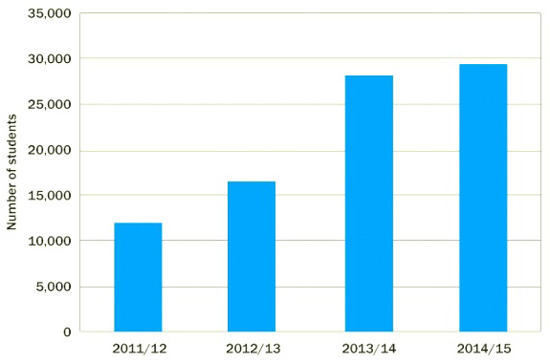 Numbers of Nepalese students applying for permission to study abroad, 2011/12 to 2014/15. Source: Nepal Ministry of Education

About 80% of those receiving permission actually go on to study abroad, with the majority of applicants for this year opting for Japan, Australia, the US, India, and Malaysia.

Japan’s position as the most popular destination for 2014/15 (9,363 students received no-objection letters for this year) represents a reversal with number two-ranked Australia (8,692 students), which last year was the destination of choice with no-objection applications numbering more than 11,000.

Nepal has been an important growth market for both destinations in recent years. It was one of the top three fastest-growing markets for Australia in 2014, and the second-fastest-growing for Japan in 2013.

Australia’s more recent drop, however, is at least partly due to a recent crackdown on visas after authorities there uncovered documentation irregularities from some Nepali students. According to The Australian newspaper, some Australian universities have blacklisted agents in Nepal outright, among them the Kangaroo Education Foundation and Global Village International Education, both of which are based in Kathmandu. As a whole, the number of Australian visas granted to Nepalese students fell 16% in 2014 compared to the year before.

Enrolments to US schools, another favourite destination for Nepalese, suffered five consecutive years of decline from 2008/09 through 2013/14, but numbers have stabilised this year. Nepali students in the US also recently received a boost when visa authorities relaxed requirements in response to the earthquake. Students holding F-1 visas – who currently number more than 9,000 – may now reduce course loads and request authorisation to work additional hours without risking their visa status.

The Nepalese market is now set for further growth moving forward. The British Council estimates the country to be among the top ten for growth in the 18-to-22-year-old age bracket for the next nine years. That 18-to-22 cohort is expected to expand by 787,000 people between 2011 and 2024, suggesting that – even if the higher education sector recovers speedily from the earthquake – there may not be sufficient university places to meet demand.

This outbound picture is one international educators should note. As the following graphic illustrates, Nepal is part of a larger pattern in South Asia where tertiary-age populations have grown well beyond the capacity of local education systems. As the British Council has noted, “Rising demand in South Asia for higher education is currently not being met, despite its growing importance on the economic development agenda. As South Asian countries forge a path towards growth of their industry and services sectors, the role of the higher education sector in facilitating a skilled, knowledgeable workforce has become critical – to the point of competitive advantage for many countries seeking investment.” 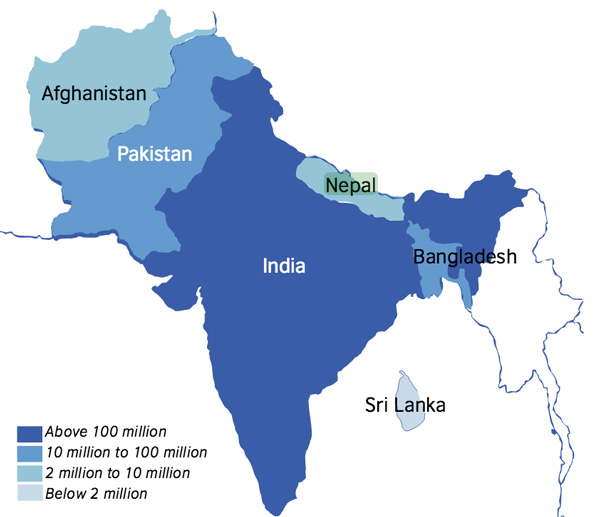 The remittance economy has also long been an important driver of Nepalese mobility overall. With a strong tradition of sending workers abroad, the country has ranked as high as third worldwide for remittances as a percentage of GDP, with remittances estimated at 25% of GDP in 2013.

This figure too has undergone a post-earthquake adjustment. Cash sent from abroad rose 35% after the disaster, in part to aid rebuilding efforts. As the country recovers, however, remittance inflows will once again become an important source of income and foreign exchange to support study abroad.

Nepal also possesses high potential for recruitment for STEM (science, technology, engineering, and math) programmes, particularly at the graduate level. Roughly 65% of Nepali students enrolled in the US in 2014/15, for example, are pursuing studies in STEM fields.

The next most popular area of study for US-enrolled students is business and management, at about 16%. This percentage has risen recently due to increased numbers of banks opening in Nepal and a general perception that business graduates fare better in the job market. The trend is also fed by an increase in the number of private university campuses within Nepal.

Another trend to note, according to the British Council, is the rising number of NGOs operating in Nepal that are driving demand for courses in women’s studies, environmental management, and developmental studies as donor agencies pour into the country. In a country in which discrimination against women in both social and legal settings is common, especially in rural areas, female enrolments at the undergraduate level have been rising.

There is no current data assessing Nepal’s level of English proficiency, however something similar to Indian English is spoken by many locals, and the language of diplomacy and international affairs is English. The 2008 book Language Planning and Policy in Asia by Robert B. Kaplan and Richard B. Baldauf, Jr states: “Scores of domestic and international seminars, symposia, conferences, and meetings are held in Kathmandu every year. The language used on these occasions is English.”

Higher education in Nepal has changed drastically since the end of monarchical rule in 1990 and the total abolition of the monarchy in 2008. A country that had no private colleges has developed a hybrid model in which public universities have grown in size by providing affiliation to private colleges, which function autonomously in terms of management and hiring but follow the curricula and testing criteria of the universities to which they are affiliated.

In addition, the National Programme for Higher Education Reform and Development (NPHERD) was founded to facilitate further development of the country’s tertiary sector. The programme received a boost this year when the Government of Nepal signed a loan agreement with the World Bank in early 2015 aimed at improving the quality, relevance, and efficiency of public universities.

The system suffers from a mismatch between the needs of the employment market and the courses available in many higher education institutions, and the British Council estimates graduate unemployment at more than 20%.

The scarcity of jobs has been severe enough to prompt the government to offer collateral-free loans of up to US$2,000 to university graduates as a means of spurring self-employment and entrepreneurship.

For students who do travel overseas, enticing them to return is crucial for Nepal’s rebuilding, and the earthquake has made this an issue in policy circles. Ministry of Education official Hari Lamsal told The Himalayan Times earlier this year, “If the knowledge and experience gained abroad is utilised for the development of own country, there will be progress everywhere.”

Rajendra Baral, President of the Educational Consultancies Association of Nepal (ECAN) agreed, adding, “Nepali students returning to the country after studies will bring new skill and expertise which will be helpful in building a new Nepal.”

Recent developments underscore the need for – and challenges that await – graduates returning from abroad. Nepal drafted a new constitution in September that brings sweeping changes to the nation, including a shift to a federal structure and proposed boundaries for dividing the country into seven states.

The Post Disaster Needs Assessment (PDNA) arm of the UN, EU, and World Bank, meanwhile, estimates that total earthquake recovery costs will amount to one third of GDP. The UN has also reported that 1.4 million people still need help with food, and more than 2.5 million people need safe drinking water and sanitation.