Signs of strengthening demand for study abroad in Japan

For several years now, the Japanese government has been intent on globalising its education system, setting goals of hosting 300,000 foreign students and sending out 120,000 of its own students for study abroad by 2020.

As we reported in July, the numbers of foreign students in Japan are growing once again after three years of minimal or no growth: Japan Student Services Organisation (JASSO) data show that there were 184,155 international students enrolled in the country as of 1 May 2014 (growth of 9.5% year-over-year).

Now there are hopeful signs regarding Japan’s outbound student mobility, as well. The most recent mobility data, as compiled by Japan’s Ministry of Education, Culture, Sports, Science, and Technology (MEXT), counts 60,138 Japanese students studying in higher education institutions in other countries in 2012. This is the highest number since 2008, when it was 66,833, but, perhaps more importantly, when compared to the 57,501 Japanese students that went abroad in 2011, it represents the first year-over-year increase in outbound numbers since 2004. 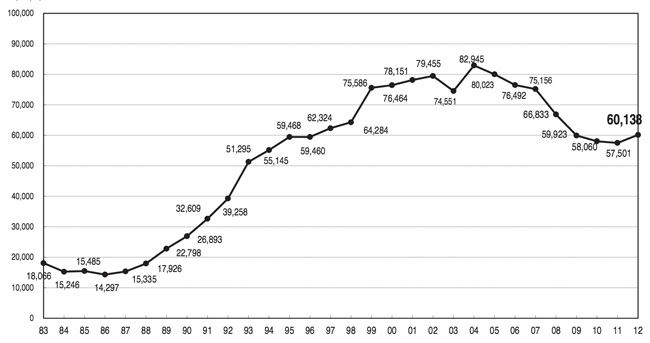 These numbers, while positive, are of course a long way away from the goal of having 120,000 Japanese students studying abroad in 2020 – and even far off the peak of the nearly 83,000 Japanese who studied abroad in 2004.

To accelerate the growth curve, the government as well as agency associations have been quite active in recent months in launching strategies to encourage more Japanese students to obtain foreign credentials.

For example, this past spring, JASSO – whose mandate includes supporting MEXT goals for Japanese student mobility – launched a new study abroad website. The website identifies available scholarships in various countries and also provides students with information on how to choose schools, transferability of foreign credits, and possible study options and pathways in destination markets.

There is also a new guidebook produced by the Japan Association of Overseas Studies (JAOS) for teachers: Guiding High School Students to Study Abroad. The guidebook is meant to support teachers when they are counselling high school students, and it covers a range of major destinations and available options and scholarships.

Indeed, growth in study tour bookings from Japan is part of a strengthening demand for short-term programmes among Japanese students. A separate survey of high school students conducted by MEXT found that the number of high school students studying abroad as part of a group trip increased by 11% between 2011/12 and 2013/14. The survey estimated that 168,668 students from roughly 1,300 schools participated in group trips abroad that year.

More money is also being made available for Japanese students to study abroad. In 2014, for example, the government doubled funding for study abroad scholarships. It is also turning to the private sector for help in making study abroad affordable for students via an umbrella initiative called the Japan Public-Private Partnership Student Study Abroad Program.

Why the push for study abroad

The association between economic competitiveness and internationalised education is growing stronger all the time, and China is a case in point. Increasingly, sending students out to study abroad is a long-term investment designed to boost – and stabilise – economies via not just knowledge inputs to the labour force but also by strengthening trade and diplomatic ties to other countries.

Japan’s economy could certainly use boosting, and stabilising. It has been struggling for some years and was hampered in 2015 by a slowdown in demand from major Asian trading countries including China.

Since 2013, Prime Minister Shinzō Abe’s government has been relying on a mix of public spending and central bank stimulus to try to turn things around, but these measures could not prevent Japan from slipping into a recession in 2014.

However, Prime Minister Abe’s stimulus strategy may be playing a role in a trend of better employment prospects for Japanese post-secondary students. While only 91% of new post-secondary graduates in Japan had secured jobs as of April 2011 – a result of a long hiring freeze prompted by the global financial crisis – this percentage had risen to 97% in April 2015.

Despite its proximity to Japan, China only narrowly eclipsed the US as the biggest receiver of Japanese post-secondary students in 2012, according to data compiled by MEXT (21,125 went to China that year versus the US’s 19,568). However, the Chinese number was up 17.6% year-over-year, while the US intake was down -2%.

Japanese students’ increasing interest in China as a destination makes sense, according to Jeremy Rappleye and Edward Vickers. Writing in University World News, Mr Rappleye and Mr Vickers argue that wars and regional tensions in the 20th century derailed a natural pan-Asian education and culture flow, and focused Asian students’ study ambitions on the West (especially America) and on English-language instruction. The authors maintain that a Western orientation continues today (e.g. in the Japanese government’s current push to include more English-language teaching in all levels of the education system) and that it probably will for as long as Western universities command the top places in world university ranking systems.

But as we know, Asian universities are swiftly moving up these rankings – especially those in China, Hong Kong, and Singapore. As Phil Baty, editor of the Times Higher Education Rankings, noted earlier this year:

“The world expects that Asia will be the next global higher education superpower, after Europe and North America.”

In fact, some estimate that Asia could account for a quarter of the world’s top 200 institutions by 2040.

Mr Rappleye and Mr Vickers believe Japanese students should possess a far greater level of proficiency in modern East Asian languages “considering the region’s crucial importance to Japan.” Japan, they imply, has been slow out of the gate when it comes to the importance of China as an educational and cultural partner. They write:

“Here the contrast with Japan’s closest neighbour is telling. South Korea, with a population of 50 million – accounts for 21% of China’s international student population, Japan only 6%. Even America, despite its poor foreign language education and distance from the region, sends more students than Japan to Chinese universities.”

Mr Rappleye and Mr Vickers observe that despite low numbers of Japanese students in China until now, Japan is a popular study abroad destination for Chinese students thanks in part to a continued perception that Japan is ultra-modern. China sent 96,592 students to Japan in 2012, second only to the numbers they sent to the US (225,474) that year.

The stage may be set for Japanese student numbers to grow further in China, especially given China’s continued interest in Japanese education, the relative affordability of top Chinese universities compared to top American ones, and the new data showing significant growth in Japanese outbound mobility to China.

For that matter, if Japan meets its goal of placing ten universities in the global top 100 within the next ten years (compared to the two now: Tokyo University and Kyoto University), Chinese students may well have even more reason to consider Japan for study abroad.