After three years of minimal or no growth, Japan saw a notable spike in its foreign enrolment last year. The latest figures from the Japan Student Services Organisation (JASSO) show that there were 184,155 international students enrolled in the country as of 1 May 2014.

This represents a 9.5% increase over the year before, and is the first significant growth since a major earthquake struck Japan in 2011. The years since the disaster have been marked by a series of economic aftershocks, including a high exchange rate for the Japanese yen that effectively drove up the costs of study for foreign students, and a slow recovery.

2014’s strengthening enrolment is still a long way from Japan’s longer-term target to host 300,000 foreign students by 2020. But it is an indicator that attempts in recent years to further globalise Japanese education may have begun to take hold – an especially welcome development given the declining school-age population within the country.

Virtually all (93.3%) of the foreign students in Japan are privately funded, with a relatively small proportion on Japanese government scholarships or with funding support from other sources. 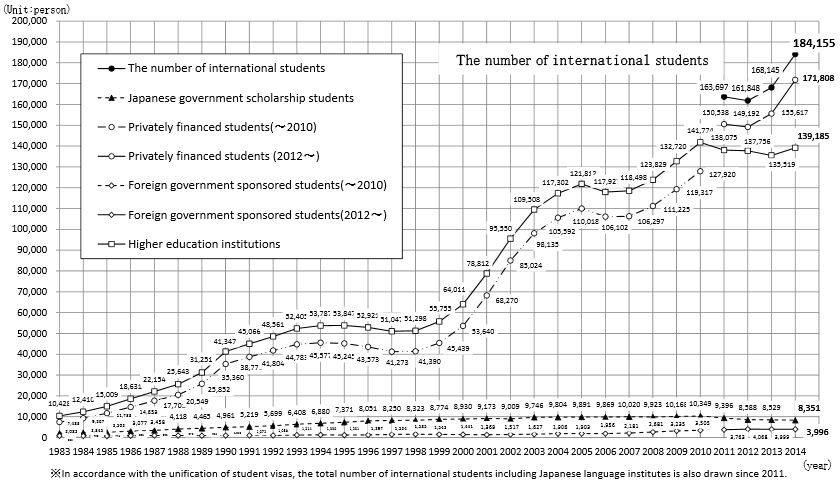 What foreign students study in Japan

The vast majority of Japan’s foreign students – 139,185 and 75.58% of the total international enrolment – study in higher education institutions. Undergraduate enrolment accounts for about half of the total HE enrolment. It has, however, declined modestly in recent years with a 4.86% decrease between 2011 and 2014. Enrolment in graduate programmes has been essentially flat over the same period, ranging from 39,749 students in 2011 to 39,979 in 2014.

In contrast, vocational education and Japanese language programmes have been the real drivers of growth since 2011.

Observers have suggested that growth in both areas is being driven by the prominence of Japanese popular culture within the region, and also by strong demand for job skills training.

Perhaps it is not surprising that nearly all of Japan’s foreign students – 92.7% in 2014 – come from Asia. As the following table reflects, the top five sending countries are all within Asia and together account for 83.24% of Japan’s foreign enrolment base.

Although down modestly between 2013 and 2014, China still accounted for just over half of all foreign students in Japan last year. “[Chinese students] have choices,” says Gracia Liu-Farrer, an international education specialist at Waseda University. “They could go to Europe and they could go to the United States. But many chose to come to Japan because they like the culture and the pop culture. Many of them have a fantasy of Tokyo life.”

Proximity is obviously a big factor for Chinese students as well, but so too is affordability. As the Japan Times reports, “Though studying at a US university may be an enticing prospect, average annual tuition for four-year colleges runs between US$32,000 (¥3.8 million) for public out-of-state students to US$41,000 (¥4.9 million) for private nonprofit schools – the elite Ivy League schools are even more expensive. In Japan, on the other hand, average tuition at national universities is just over ¥535,000 per annum while tuition at private colleges can run up to ¥1.4 million for nonmedical majors.”

This combination of proximity, affordability, and cultural affinity is expected to continue to drive increased Chinese enrolment in Japan in the years ahead, meaning that the small decrease last year may be more a temporary blip than anything else. For the moment though, it is students from Vietnam (up 91.6% last year) and Nepal (79.9% growth in 2014) that are driving much of the recent growth.

The increased numbers from both markets appears to be a function of enhanced Japanese marketing efforts in Southeast Asia, the expanded footprint of Japanese companies in some of these same markets, and the high demand for vocational training in a number of key sending countries in the region.

As the 2014 figures reflect, students from these key Asian markets are the core of Japan’s foreign enrolment base, particularly with respect to longer-term studies that see students begin in language or university preparatory courses before moving on to vocational or degree programmes.

In contrast, students from North America and Europe account for a greater percentage of short-term enrolment – largely language, culture, and exchange programmes – at higher education institutions in Japan. While European and American students represented only 5.4% of long-term enrolment in 2014, they combined for 32.6% of short-term study visits in that same year.

Japan’s recent gains in attracting greater numbers of international students occur against the backdrop of a number of major globalisation initiatives in Japanese education. These include the Top Global University Project to drive Japan’s top universities into the upper echelon of global university rankings, and the Global 30 Project, through which leading Japanese universities offer complete degree programmes in English.

The government has also taken steps to expand support for outbound student mobility and has announced reforms to further internationalise Japanese curricula through the expansion of English language instruction in primary grades as well as a proposed redesign of university entrance exams.