The British government signalled its intention last week to undertake a major shake-up of higher education starting in 2016. An official consultation paper released on 6 November – Fulfilling our Potential: Teaching excellence, social mobility and student choice – sets out a series of proposals that could substantially redraw the landscape of British higher education in the years ahead.

First and foremost, the plan seeks to place a new emphasis on teaching excellence and student outcomes.

It outlines a model through which UK universities would be evaluated based on quality of teaching, student satisfaction surveys, retention rates, and graduate employment outcomes. Those institutions that rate highly on these measures could be given greater discretion to raise fees; those that fall below government quality benchmarks may be obliged to cut tuition rates.

While fees for foreign students generally range considerably higher, surveys indicate the vast majority of UK institutions are currently charging tuition fees of £9,000 (US$13,600) for domestic students, the maximum allowable rate under a government-imposed cap. Tuitions have been frozen at this level since 2012, the year at which they were raised from the previous cap of £3,000.

The not-so-subtle implication of the green paper is that the government intends to adopt a much more market-based approach in higher education with clear financial incentives to drive its proposed reforms. This reflects a growing emphasis on employability in education systems around the world, and the increasing determination of governments to close persistent labour market gaps, boost youth employment, and generally place a sharper focus on employment outcomes.

“We must do more to ensure that the time and money students invest in higher education is well spent,” said Universities and Science Minister Jo Johnson. “Our ambition is to drive up the quality of teaching in our universities to ensure students and taxpayers get value for money and employers get graduates with the skills they need.”

The Minister added in a separate comment to The Guardian, “While there is a lot of excellence [in British higher education], there is also, as the sector acknowledges, patchiness and variability in and between institutions…Students should come out of their university years feeling they’ve got value for money for their time there. Unfortunately, there are too many students coming out feeling that they haven’t, and I want to address that.”

The green paper is framed as a consultation document. Following the close of the consultation period on 15 January 2016, observers expect further announcements as to how the government will proceed, including the introduction of legislation in 2016 to put new administrative and regulatory controls in place.

Among its many proposals, the green paper calls for the formation of a new regulatory agency for British universities, the Office of Students (OfS). The OfS would replace at least two existing agencies, the Higher Education Funding Council for England (HEFCE) and the Office for Fair Access (OFFA), and is positioned in the green paper as a new “sector regulator and student champion.”

The OfS would assume many of the current functions of existing bodies such as HEFCE and OFFA, and would also be responsible for quality assurance across the system. The new arms-length, non-government body is also proposed as the gateway for new providers seeking approval to operate and confer degrees. The green paper maps a streamlined system by which new institutions that demonstrate high quality standards could move more quickly through government approval processes.

As shown in the following illustration, the new OfS process would see qualified providers approved two-to-three years faster than is the case under current procedures. 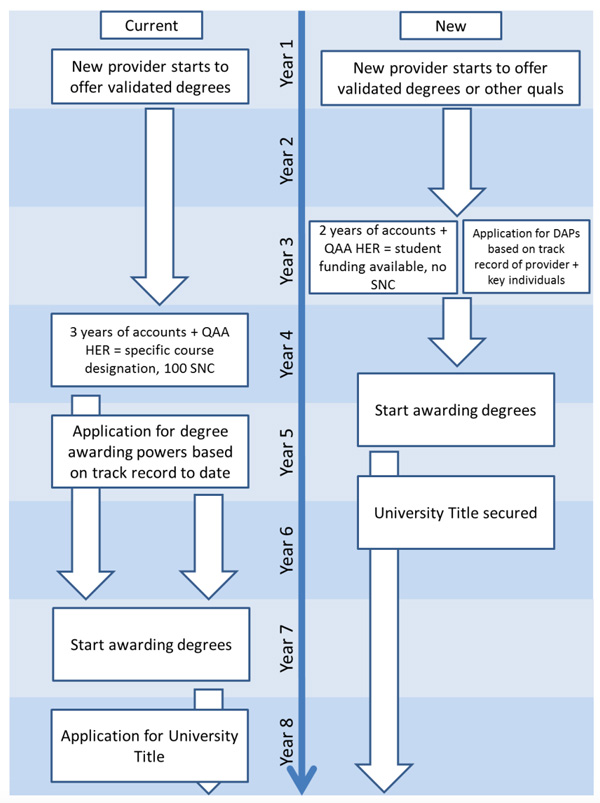 How new providers would secure university title under the proposed Office of Students process, as compared to current procedures. Source: Department for Business, Innovation, and Skills

“The new Office for Students would have a clear remit to champion value for money and the student interest in its decision-making. And by opening up the sector to new universities and colleges, students will have more choice than ever when they come to apply to university,” said Minister Johnson.

The OfS will also have responsibility for administering a proposed new Teaching Excellence Framework (TEF). Among a larger field of stated goals, the TEF aims to:

As such, the framework incorporates both reputational and financial incentives for higher education institutions, and the government intends to proceed with the first TEF assessments in 2016/17. Providers that pass their initial TEF assessments will be awarded a foundation TEF level (Level 1) that will be valid for three years. Those providers will be entitled to raise their tuition fees, in line with inflation and to the limit of a new Ministry-imposed cap, as of the 2017/18 academic year.

The framework also anticipates higher levels of assessment – and corresponding increases in financial incentives – to be introduced in 2017/18. It is expected that previously qualified providers (that is, those with TEF Level 1) may apply for reassessment under the expanded TEF structure at that point. For those institutions assessed at the higher TEF levels, the green paper adds, “We would expect the financial incentives to apply at the institutional level from the academic year 2018/19 and be differentiated according to the TEF level awarded.”

Harking back to the UK’s spring election campaign, and indeed in the months since, the current government has strongly signalled its intention to introduce a new emphasis on teaching in British higher education. The early reaction to the green paper, however, suggests that its proposals may be less radical than some had feared.

However, British educators have been quick to point out the importance of autonomy for the country’s universities. And student groups are alarmed at the linkage between teaching quality and the ability to raise fees. National Union of Students President Megan Dunn said: “Teaching should always be a key focus of higher education, but the NUS is adamant the teaching excellence framework should not be linked to an increase in fees. Students should not be treated like consumers.”

It is unclear still what the implications of the proposed changes may be for international students. At the least, students, families, and agents will have a new framework through which to evaluate and select British institutions. It also seems likely that the UK system will become more stratified over time in terms of TEF assessment levels and fees. To the extent that domestic tuition rates rise in relation to inflation (or beyond), this may also place an upward pressure on international fees. Finally, we might also anticipate a “shaking out” period during which some current providers will exit the system and new entrants will appear via the streamlined OfS regulatory process.