The past decade has seen a growing trend of private investment in education. Private money has been flowing into everything from school start-ups and acquisitions to education services (e.g., administrative services, marketing, recruitment), education technology, professional training, and, increasingly, the provision and management of student housing.

Private investment in student housing – both on-campus and off, and both independently and in partnership with schools – is growing by leaps and bounds for two reasons. The first is that institutions, banks, and private developers see the potential for good returns given the profound imbalance in supply and demand in student housing that exists in many markets. Simply put, there are not enough beds to meet the needs of growing populations of students in many places around the world.

The second reason is that many schools, colleges, and universities simply do not have the land or capital required to meet demand for student housing. This opens up an opportunity for private companies and investors – whether acting independently or in collaboration with one or more institutions or schools – in markets where students are increasingly empowered and sophisticated consumers. As the Class of 2020, a leading think-tank on student housing in Europe, notes in its 2015 annual report:

“Students are now seen as active consumers rather than passive tenants, and developers and investors are keen to tap into this potentially lucrative market.”

The connection to recruitment

Accommodation is one of the biggest costs associated with studying away from home, and is therefore an area students and their parents will look at carefully when deciding between institutions and locations. This may be particularly true when two institutions are comparable on other measures, but one stands out for the quality, comfort, or innovativeness of housing available to students.

This is especially the case for international students, who are not only living far from home but also surrounded by new cultures and languages. Safe, comfortable, and affordable housing is a must – both for the peace of mind of students and their families but also for academic success.

Whether a student is domestic or international, housing is a significant element of their study experience. Indeed, as many international educators know well, problems with accommodations can overshadow an otherwise exceptional programme, classroom, or campus. Students come to school to study, but they also carry hopes of having a great life experience, and it is difficult to achieve the latter without a comfortable, safe, and affordable place to live.

For educators, the availability of quality housing can be a key feature in the marketing and recruitment effort, a point that is well made by the recent example of Japan’s Takushoku University. The university opened a dormitory in 2012 at its Hachioji campus in western Tokyo, and in 2013, the Hachioji campus received three times as many applicants as there were available rooms. University official Mitsuo Nakahora told The Japan Times, “The existence of this dorm apparently convinces students to consider Takushoku as an option when they apply for university.”

Another Japanese institution, the Shibaura Institute of Technology, has also invested in student housing as part of its recruitment strategy. The school’s general manager of academic affairs Yong Jin Chung, also speaking to The Japan Times, said:

“Stable housing supply for students from abroad is part of the strategy to increase the number of international students and for the globalisation of our university.”

Some housing providers and institutions are taking this further by stepping up the accommodation offer with distinctive amenities or features, while others are targeting specific student needs or preferences. For example, University College Cork in Ireland offers an alcohol-free dormitory for those who prefer the option, including any students whose cultures require them to abstain from alcohol.

Then there is Austria’s OeAD, which is now offering eco-friendly “pop-up dorms,” which they describe as “temporary, eco-friendly accommodations [made of] modern wood as well as recycled ship containers.”

The purpose-built student housing complexes and apartments that are increasingly being opened by private developers all over the world do not look like the school dormitories of yesteryear. They are larger in scale, and most are meant to be lifestyle communities able to accommodate large numbers of students.

As the Class of 2020 Foundation explains:

“The European student housing investor is ambitious, building up a significant portfolio for economies of scale and operational models to work. Another parallel seems to be that strategies are truly international in order to spread risk and not be dependent on one country’s education policy.”

The Foundation notes that it is mainly the bigger properties and developments that attract such investor interest – “portfolios of 2,000 to 4,000 units” – and in larger cities where demand for student housing is higher.

Adding a further international dimension to the trend, such investments are increasingly made by multinational firms. Private investments in student housing in the UK, for instance, are said to come mainly from North America and increasingly, Asia and the Middle East.

Picking up on this point, the following illustration maps a spectrum of student housing investment in different markets around the world, ranging from examples of those that are “least mature” (which generally indicates an absence of purpose-built student housing) to “most mature,” where targeted, investor-backed housing for students is more common. 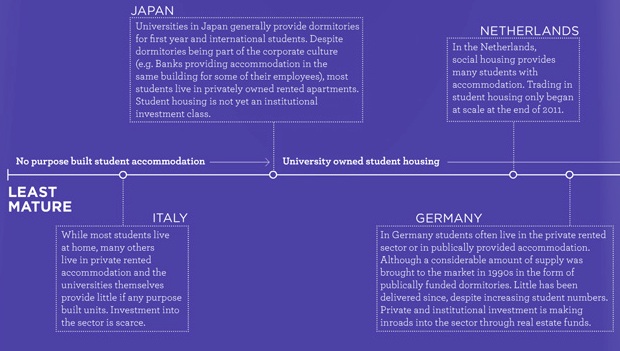 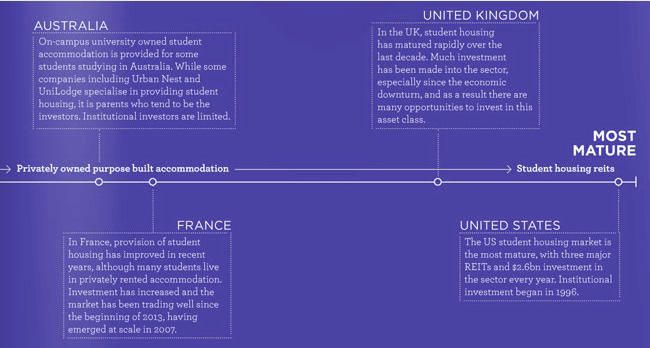 The evolution of the student housing market. Source: Class of 2020. Please note that the term “REIT” in the illustration above refers to Real Estate Investment Trust, a large-scale property investment fund that is analogous to a mutual fund in stock or bond markets.

As some markets, notably the US and UK, continue to mature, private operators and investors are now expanding their operations elsewhere. The European Union as a whole is seeing more private investment in student housing. Yet Wouter Onclin, foundation manager of the Class of 2020, notes a continuing shortage of student housing in many EU cities.

He points out as well that European universities generally do not pursue partnerships with private property companies to the extent they might. He quotes Karin Helqvist of the University of Gothenburg in Sweden to make the point of why such partnerships may warrant more consideration by university administrators:

“With a lot of hard work, each year we manage to put a roof over international students’ heads. But what we don’t know is how many students decide not to come to Gothenburg because it is so hard to find a place to live.”

An uncertain regulatory environment appears to be playing a part here. Each local market in Europe has its own legal requirements governing student housing, and many governments are not yet familiar with the concept of private-public student housing projects. But these obstacles are not prohibitive, adds Mr Onclin in a recent interview with Study Travel Magazine:

“Differences between countries in Europe are still significant, and developers really have to get familiar with the local culture before entering a market. But if you have a good team of lawyers and tax accountants, the borders in Europe don’t really present a problem.”

Meanwhile, the pace of investment in Australia is also picking up dramatically, thanks to a situation where, according to The Australian Financial Review (AFR) only 54,000 purpose-built student bedrooms are available for the 1.2 million students enrolled in Australian higher education.

“Institutional investors have started taking major positions in the sector from the Government of Singapore Investment Corporation, which entered into a joint venture with Macquarie Capital to buy a stake in student accommodation provider Iglu, to UK-based Scape Student Living which, backed by Dutch Pension giant APG, has just purchased two prime sites in Melbourne and Brisbane for AUS$560 million worth of student accommodation.”

“With tertiary education being a key anchor of Australia’s economy, continued growth of international students from Asia and chronic shortage of purpose-built student accommodation, we strongly believe the sector provides superior risk-adjusted returns potential and is poised to become a mainstream asset class in the coming years,” added APG’s head of private real ­estate investments in the Asia Pacific, Sachin Doshi, in a recent interview with The Australian.

Other big players include Blue Sky (building 5,000 student beds over the next two years, in Brisbane, Melbourne, and Adelaide); Unilodge (with 11,480 managed beds in Australia and New Zealand), and the multinational Campus Living Villages. All of these property developers and managers are acquiring real estate as close to school campuses as possible and they are building big.

This pattern of investment appears to have been accelerated by the recent slump in the Australian dollar, but it doesn’t hurt that municipal governments in Australia also see the potential of private investment to ease shortages of student housing. AFR adds that:

“In Brisbane, there are 2,086 student beds being assessed for development by the city’s council. More than 280 have been approved since the city’s Lord Mayor Graham Quirk introduced an 80% discount on infrastructure charges for student accommodation developments in February this year.”

“There is continued growth in demand for international students,” added Mayor Quirk. “We want to promote international education, which is Brisbane’s biggest export, but also expand options for domestic students seeking quality accommodation.”

The Class of 2020 annual report makes reference to the fact that The Bologna Declaration has standardised many higher education programmes in Europe. Indeed, this is a key point: as programmes do become more standardised – think of the language school sector where commoditisation of general language courses is more and more of an issue – schools are obliged to compete on different dimensions.

Regardless of the degree of harmonisation or differentiation in programme offerings, there is an increasing awareness among educators of how key aspects of the student experience – including housing – can each represent an important source of competitive advantage.

The Class of 2020 notes that the student housing sector may take on characteristics of the hotel market, where consumers come to know and trust big brands.

Certainly right now, there is a race among multinational property investors and managers to claim their stake in the housing space. And it may not be so far in the future that students come to know prominent accommodation brands and choose accordingly.