An expanded study of English Language Training (ELT) in the UK provides further evidence that Britain is losing share in the global ELT marketplace. The report sheds new light as well on the composition of the enrolment base – the increasing role of the junior market in particular – and other important trends for UK providers.

Released earlier this month, the English UK Student Statistics Report 2014 combines survey data from member centres with international market data to provide a comprehensive view of enrolment trends for UK ELT centres, and to set those within the broader context of the global industry.

The report echoes earlier findings from major international ELT destinations. In terms of student weeks, the US is the world’s leading provider and has registered steady growth over the past four years. In contrast, bookings by student week in the UK have declined modestly from 2011 to 2014. Australia has seen solid growth over the same period whereas Canada, currently the fourth-ranked destination, has been essentially flat.

In terms of student numbers, however, the UK remains the world’s leading destination for language study. English UK’s 479 member centres hosted a combined 580,618 students in 2014. This represents a modest decrease from the 585,504 students who studied at English UK centres in 2013, but also reflects that UK-bound students have much shorter study durations – around four weeks on average – than do those who choose the US, Australia, or Canada.

Relative to the UK, absolute student numbers are much lower in each of the three other leading destinations. Average study durations, however, are considerably higher. This is particularly true in the case of the US where English language students enrol for an average of nearly 15 weeks. English UK suggests this is due to the exclusion of junior students from US statistics as well as the prevalence of well-established pathway programmes in America.

The story that emerges is one of countervailing trends in the UK, where student numbers have continued to increase over the past five years, even as student weeks have declined over the same period.

Overall, however, the UK is losing share in the global market. While bookings by student weeks have declined or been relatively flat, in the past four or five years, other global destinations have registered strong growth over the same period.

“Our key objective is to arrest the decline of the UK ELT’s market volume and value, and a return to a position of overall growth,” says English UK Deputy Chief Executive Annie Wright. “This cannot be achieved by English UK alone. We will work with government agencies and commercial partners to help the UK sector stand out from the crowd.”

The growing role of juniors

While it appears that government policy, notably with respect to immigration and student visas, is indeed having an impact on the UK’s global market share, English UK also points to another important development: the growing role of the junior market for British ELT providers.

“The proportion of juniors in the UK over the last decade has been on the rise,” says the report. “However, growth has accelerated since 2012 and junior students now represent 47% of all students at private sector member centres.” This compares to only a decade ago when junior students accounted for roughly 25% of the total ELT enrolment in the UK.

The increasing share of junior students in the UK, by student numbers (left) and student weeks (right), 2010-2014. Source: English UK

“Proximity plays an important role in attracting students,” notes the report, and indeed that point is well reflected in the 63.5% of UK ELT enrolment (and 44.4% of total student weeks) accounted for by students from Western Europe.

The following chart illustrates the proportion of total student weeks accounted for by each global region. 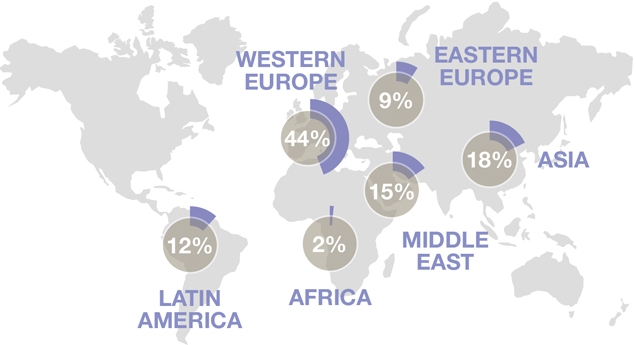 As the chart reflects, the UK is by far the leading destination for students from Western Europe, with half of the top ten source countries for British providers – Italy, Spain, and France among them – found within the region.

However, this enrolment breakdown also reveals that British providers are underrepresented, and facing strong competition, in other key regions. This is particularly the case in high-growth markets in Asia and Latin America, which account for 36% and 16% of global ELT bookings respectively.

Indeed, the strongest growth markets for UK providers over the past decade have nearly all been in Europe (with the notable exception of Saudi Arabia), but English UK concludes that the ability of these markets to drive continued growth began to wane around 2011. This has in turn sharpened the focus of UK providers on other global regions.

“These findings are helping to shape our promotional activities for 2015 and beyond,” says Ms Wright. “Highlights of English UK’s plans include our autumn road show and summer inward mission targeting agencies in the competitive Chinese junior summer school market; English UK Fairs in China, the United Arab Emirates, Mexico and Vietnam; the launching of new market reports on Mexico and the Gulf States in partnership with the British Council; and direct channel and agency-facing campaigns in Brazil, other Latin American countries and Western Europe.”