The peak body English Australia reports that a total of 163,542 international students commenced English language programmes in Australia in 2014. That total surpassed the previous high from 2008 and represents a new enrolment record in the country.

The 2014 results mark another important step in Australia’s continuing recovery from recent-year declines in ELICOS numbers. The number of English language students in Australian programmes doubled in the five years from 2003 to 2008, but then declined by nearly a quarter (-23%) from 2009 to 2012. 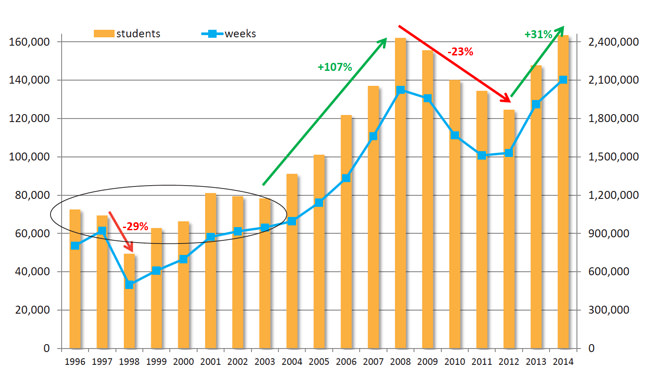 The average length of study for ELICOS students in Australia remained at 12.9 weeks in 2014. This was unchanged from the year before, and, also as in 2013, the growing percentage of English language students on student visas (as opposed to working holiday visas or other) played an important part in the overall length of study. Those on student visas, as could be expected, enrolled for longer study programmes – an average of 16.3 weeks in 2014 – whereas those on visitor or working holiday visas went to Australia for much shorter programmes (4.8 weeks and 8.1 weeks, respectively).

As we noted last year, ELICOS enrolment growth is an important driver of overall student numbers in Australia. As a recent report from the Australian Department of Education and Training (DET) points out, “During their Australian education experience, the majority of international students undertake study in more than one educational sector. The English Language Intensive Courses for Overseas Students (ELICOS) sector is the first step in an Australian study pathway for nearly two-thirds [of] international students.”

DET reports that 65% of the international students who completed an ELICOS programme in 2013 went on directly to study in another sector in Australia. Just over a third (34%) continued on to higher education while nearly one in four (23%) entered a Vocational Education and Training (VET) programme. The other continuing students either entered non-award (5%) or secondary school (3%) programmes, while just over one third (35%) of ELICOS students did not pursue any further study in Australia.

Executive Director Sue Blundell said of the 2014 ELICOS results, “The other sectors of international education look to English language enrolments as the vital first indicator of the health of international education as a whole. Pleasing as the growth is, however, it would be more sustainable if spread more evenly across all types of programmes/providers within the sector. Current government policy has favoured pathway programmes leading to higher education, with growth in these pathway students much stronger than the growth in students for stand-alone English language programmes.” 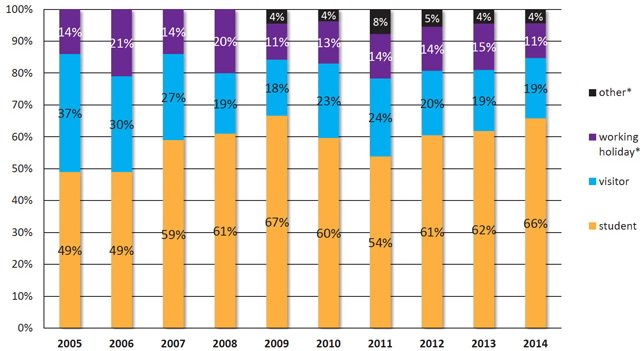 “Growth was experienced across both student visa holders and visitor visa holders,” notes English Australia. “However there was a decline in the number of English language students with working holiday visas (reflecting the decline in issuance of these visa types). An increasing proportion (66%) of students are on student visas and this cohort accounts for a massive 83% of the course weeks delivered.”

The last of these statistics is telling indeed and reflects that the vast majority of ELICOS programming delivered in Australia last year was provided for those on longer-term study programmes, many of whom will in turn go on to continue their studies in other education sectors in the country.

This reflects as well the importance for ELICOS providers of accessing streamlined visa processing arrangements, and casts into sharp relief the Australian government’s recent announcement regarding new measures to further streamline visa processing in 2016.

Early DET data (year-to-date March 2015) indicates that Australian ELICOS numbers are off to a very promising start for the year. In fact, all international education sectors in Australia are showing growth again this year, with an overall increase of 9% over the same period for 2014.

ELICOS enrolment alone was up 4.6% YTD March 2015, and these year-to-date results represent the best performance for the sector since the previous peak year of 2009. However, it also seems clear that enrolment growth for Australian English language programmes is slowing over the better part of the last 12 months, particularly compared to the dramatic growth rates from 2012 through the first half of 2014. 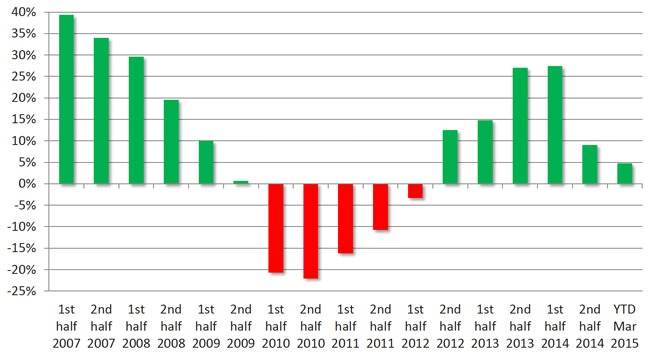 Regardless of the slowing growth over the past year, the turnaround in Australian ELICOS enrolment since 2012 has been nothing short of remarkable – so much so that Australia has now surpassed Canada as the third most popular study destination for English-language training (after only the US and UK). The country’s competitive position and ELICOS enrolment base have both been greatly strengthened over the past three years and it will no doubt continue to figure more prominently in international education markets in the years ahead.

This entry was posted in Australia, Australia/Oceania, Language Learning, Regions.