Turning the tables on conventional thinking with anti-marketing

Imagine things from the point of view of a consumer. It’s not hard after all, as each of us, when we take off our marketing and recruitment hats for a moment, is also a consumer.

We are bombarded by advertising and promotional messages all day long. Aside from the sheer volume of marketing messages, they are also increasingly pervasive: popping up in little windows on our computers, on park benches, on television screens in lifts or even in public washrooms. And a lot of advertising, particularly in certain categories, has a certain sameness to it, doesn’t it? The overall effect for many consumers is fatigue or, even worse, cynicism or confusion. We have trained ourselves to ignore advertising and marketing messages, to tune them out, or at least to distrust them.

Is it possible then that we have reached the peak of advertising? In the race to out-compete each other and to claim a small share of consumers’ fleeting attention, are we just trying too hard and creating too much noise?

Those questions are at the heart of a slate of new marketing approaches that some have grouped under the umbrella term “anti-marketing.” There are different ideas afoot as to what it really means but if you boil them down you get a new framework for marketing that influences everything from how you try to reach prospective consumers, to how often you try, and how you engage with them once you do.

At its core, anti-marketing is built around a couple of simple ideas:

Adrian Liley is the head of sales and marketing for British Study Centres. At the English UK Marketing Conference in London earlier this year, he presented his ideas and tips for anti-marketing. His remarks focused in part on the specific context of marketing English language schools, but the ideas he advanced are widely applicable for agents and all types of educators.

Mr Liley’s prescription for selling to a tired market?

“Be innovative, different, and have a sense of fun. If you do those three things, you’re going to come out alright.”

While his presentation provided a variety of examples and approaches, we’ve had a go at boiling them down into four basic tenets of anti-marketing.

1. “Be brief, be brilliant, and be gone.” Think: less noise, more surprise. In the age of information overload, you can anti-market by being more concise and by keeping things simple.

2. Be honest, even painfully honest. In the best case, this builds integrity and trust in your brand. At the least, it manages consumer expectations and can even have the effect of turning a disadvantage into an advantage.

Mr Liley noted one example where a summer programme he was marketing took place on three separate campuses of a university partner. Students were meant to travel between the three sites via bus throughout the programme. In other circumstances, this might be something to gloss over in the marketing campaign. In this case, however, the team turned the problem on its head and promoted the fun of moving from place to place on the “big yellow bus” as the programme’s most important feature.

The result? A successful summer course and happy students who knew exactly what to expect from their multi-site experience.

Perhaps one of the most famous examples of painful honesty in marketing comes from Amsterdam’s Hans Brinker Budget Hotel. For a decade now, the hotel has made a virtue of its limited choice, limited service, and the very few amenities on offer.

The result of its celebrated marketing efforts? Hans Brinker has seen a dramatic increase in occupancy rates and profitability, and an equally spectacular decline in customer complaints (because everybody knows exactly what to expect from a night at the hotel). 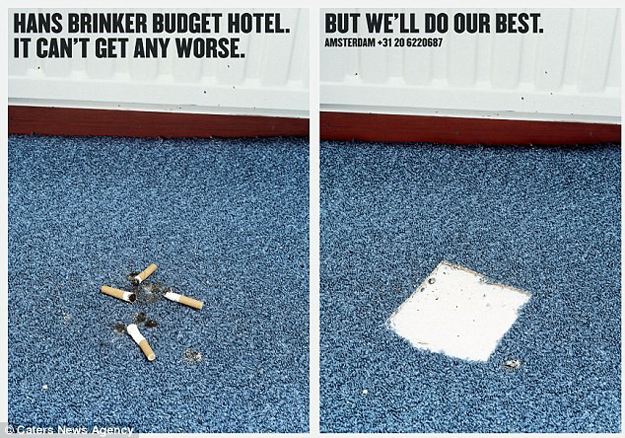 3. Be unpredictable. Try something different and, at all costs, avoid cliché and the same selling points that everyone else in your space is using.

For example: “Don’t obsess about quality,” says Mr Liley. “The more you try to tell an agent or student about the quality of your school, the more they won’t believe you – they hear it all the time.” Instead, look for ways to stand out.

The English UK audience heard about another example where International House Newcastle produced a brochure entirely focused on the school’s location. The brochure gave passing mention to the school and its courses but was otherwise devoted to an unvarnished, grey-skies-and-all celebration of Northern England. The result? A successful recruitment effort and a school that has recently moved to larger premises.

Reverse psychology is a tactic that is sometimes advanced in anti-marketing. In this case, the marketer is not so subtly appealing to a female demographic in its packaging.

Part of being different is landing on what Mr Liley describes as a “true USP” – that is, a legitimate point of differentiation for your school or programme. He noted the London School of English – and its emphasis on a free lunch and free access to online learning at the top of their “10 reasons to choose LSE” – as a standout example in this respect. 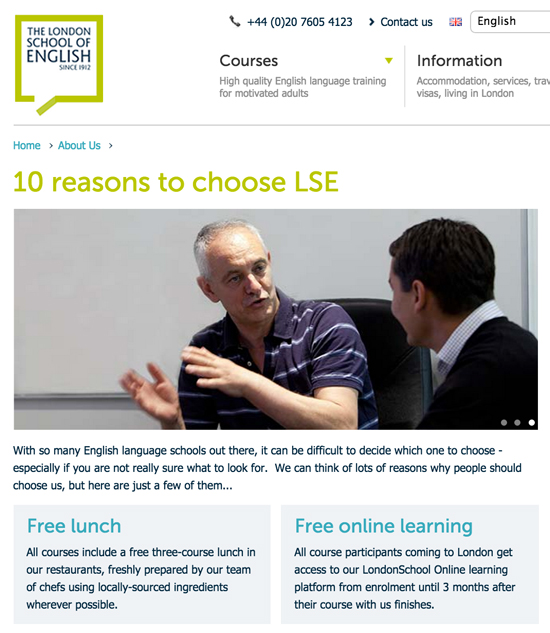 A truly distinct selling proposition from the London School of English.

In another example, Mr Liley highlighted the power of storytelling as a basis for differentiation. The main school of the Churchill House School of English is housed in a building that once appeared in a painting by the legendary artist Vincent van Gogh. The school was able to use this as part of its story and as a unique way to introduce itself to agents and students.

4. Don’t promote, attract. Avoid shouting at customers with large, pervasive marketing campaigns. Instead, attract them with engaging, honest creative. “Look at the world through your customers’ eyes,” says Mr Liley. “Make it simple and visual.”

Marmite trades on the strong positive or negative reactions it tends to trigger with customers in this simple, engaging creative.

And, where possible, create a sense of exclusivity or scarcity. In an age of abundance and information overload, these qualities in themselves can be distinct selling positions.

“Too many things are thrown at students,” he adds. In an education fair where all other marketers were waving around large expensive brochures, for instance, there was one school that offered only a simple leaflet with two courses described and an application form directly attached. “Legend has it that he took 40 bookings in one day,” says Mr Liley. “We won’t speak of how I made out.”

To some, anti-marketing is an important, next evolution of marketing practice and perhaps the logical result of “overload marketing” where the efforts of brands and advertisers to out-spend and out-compete each other have reached past the limits of their effectiveness.

“Anti-marketing is the natural last extension of what we’re all doing,” offers Mr Liley. “You start with your push marketing. You go out there and you try to find somebody to buy your courses. You find the need, you over-market. You cause confusion and boredom because people are just faced with too much. Then you go to understated marketing, you sort of draw it all back. People become curious about what you’re selling and then they come to you and tell you what they want. Finally, you’ve got the interest and [that is] anti-marketing.”