PwC’s forecasting models project the world economy will grow at slightly more than 3% per year from 2014 to 2050, and that it will double in size by 2037 and almost triple by 2050. The report adds, however, that after 2020, they anticipate a slowdown in global growth. This is attributed to two main factors: a levelling off of the rate of expansion in China and some other major emerging economies, and a curbed rate of growth in the working age population in many large economies.

One of the most compelling findings in the PwC forecast is a projected shift in global economic power away from (currently) leading economies in North America, Western Europe, and Japan over the next 35 years.

The world in 2050, concludes the report, will be very different in terms of the global ranking of national economies and the major drivers of economic growth.

Its analysis compares national economies in two ways. Gross domestic product (GDP) measured via purchasing power parity (PPP) adjusts for differences in price levels across countries, whereas GDP in market exchange rate (MER) terms does not attempt to factor out such price differences from country to country.

“GDP at PPPs is a better indicator of average living standards or volumes of outputs or inputs, because it corrects for price differences across countries at different levels of development,” notes the report. “In general, price levels are significantly lower in emerging economies so looking at GDP at PPPs narrows the income gap with the advanced economies compared to using market exchange rates. However, GDP at MERs is a better measure of the relative size of the economies from a business perspective.”

The difference between the two is important in terms of providing a more nuanced understanding of relative economic growth and size. For example, China has already overtaken the US (as of 2014) to become the world’s largest economy in PPP terms, and is projected to surpass America in terms of MER GDP values by 2028.

Other notable projections include:

The following table shows the current global ranking of world economies as of 2014 and the projected rankings for 2030 and 2050, all in PPP terms. Keep in mind that today’s newborns will be in secondary school in 2030. 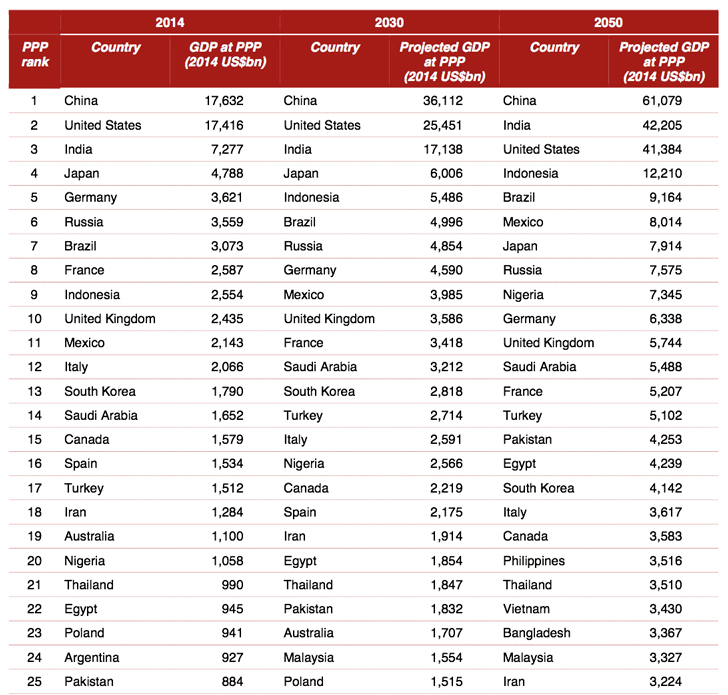 The groups of seven

PwC also compares two key groups of countries: a modified “G7” grouping (Canada, France, Germany, Italy, Japan, the UK, and the US, plus Australia, South Korea and Spain) and the “E7” – that is, the seven-largest emerging market economies (Brazil, China, India, Indonesia, Mexico, Russia, and Turkey).

The following chart shows the projected growth trends for both the G7 and E7 groups through 2050.

As the chart illustrates, the E7 countries have already surpassed the G7 countries in terms of GDP adjusted for PPP exchange rates. When measured in MER terms, however, the G7 economies are still roughly 80% larger than the E7 group.

However, the E7 economies are also expected to overtake the G7 countries in MER terms by 2030. PwC adds, “Looking forward, our base case projections suggest that the GDP of the E7 countries will be around twice as high as that for the G7 countries by 2050 in PPP terms, and more than 50% higher in MER terms.”

Another startling projection in the PwC forecast is that the gap between the three biggest economies – China, India, and the US – and the rest of the world will widen in the coming decades.

Also of note, the average income per capita (that is, GDP per capita) is expected to still be quite a bit higher in advanced economies in 2050. “The current gap in income per capita between developing and developed countries is just too large to bridge fully over this period,” says PwC.

Bringing forecasts down to earth

The type of “megatrends” forecast that PwC offers in its report is useful for just that: a consideration of high-level trends that point towards major shifts in the world economy. And the major shift in question here is a transfer of economic power from advanced to emerging economies.

On this point, PwC concludes, “Given the rise of India and China, our model suggests that the US and the EU’s share of world GDP in PPP terms will face a steady decline from around 33% in 2014 to only around 25% by 2050. This shift of global economic power to Asia may occur somewhat more quickly or slowly than this, of course, but the general direction of change and the historic nature of this shift are clear.”

The implications for individual trading partners or organisations are of course less clear. But what PwC is describing here is not merely a shift in the relative size of economies; it is a profound transfer of economic and political influence across the globe. Whereas today we talk about emerging education hubs in Asia and elsewhere, by 2050 we may be reflecting on a remarkably different landscape for international education as well.