Arabic language studies booming in the US

The Modern Language Association (MLA) reports that foreign language study is on the rise in the US, with enrolment in language courses at colleges and universities growing 12.9% from 2002 to 2006 and another 6.6% from 2006 to 2009. Even so, roughly nine out of ten American students do not pursue foreign language studies of any kind. And only 1% study the so-called “critical need languages”, a classification that indicates the language has a particular bearing on US national security interests.

Particularly in that context, the growth in Arabic language studies in the US over the past decade is nothing short of remarkable. Surveys conducted by the MLA in 2006 and 2009 found that interest in studying Arabic changed sharply in the wake of the September 11 attacks of 2001. American student enrolment in Arabic language courses grew by 126.5% from 2002 to 2006 and then again by another 46.3% between 2006 and 2009 – the most recent period for which survey data is available.

That makes Arabic the fastest-growing area of foreign language study in the US, by far, and, as of the 2009 survey, the eighth most-studied language in America. Also as of 2009, 35,083 college and university students in the US were enrolled in Arabic courses.

“The September 11th attacks in 2001 comprised the second ‘Sputnik moment’ in recent American history, highlighting the importance of studying foreign languages and focusing in particular on Arabic,” says Dr Hezi Brosh, an associate professor of Arabic at the United States Naval Academy. “Pressures on colleges and universities to install or augment Middle Eastern studies have come from all directions. The Department of Defense and other government agencies, businesses and other educational institutions have all expressed the need for more attention in this area. The wars in Iraq and Afghanistan created a new demand in federal agencies for speakers of Arabic and other critical-need languages.

To cope with this growing demand, colleges and universities have created or expanded Islamic, Arabic, and Middle Eastern Studies departments and programmes. As the study of Arabic became more pertinent to Americans than ever before, universities, bolstered with federal funding, inaugurated language flagship programmes.”

There are about 350 million Arabic speakers today, making it the fifth most-commonly spoken language in the world. As the political and economic influence of the Middle East and North Africa (MENA) region continues to extend globally, this in turn is fueling greater interest outside of the region in Arabic language and culture.

A recent article from NAFSA makes the point that students have different motivations for studying Arabic. Some do so out of an academic interest in the culture or because they have a personal link – a family connection or other – that fires their interest in the language. For the most part, however, students pursue Arabic language studies out of the belief that it will assist them in their careers, whether in national security, with the growing field of multinational corporations active in the region, in academia, or with the non-profit sector.

NAFSA highlights the example of Cloe Medina Erickson, an American who earned a master’s of architecture degree from Montana State University in 2000, and who subsequently returned to the university to study Arabic. Ms Erickson now lives in Morocco, where she works as an architectural preservationist and where she has also founded a nonprofit focused on community development. “Speaking Arabic was the gateway to my career,” she says. “They appreciated the effort that I made to learn their language, understand their culture, and make an effort to speak with them in their native tongue. I have used my language to converse with our programme partners, write contracts, and meet with the Moroccan government. I could not do the work that I am doing without knowing Arabic.”

Dr Brosh surveyed over 200 US students enrolled in Arabic studies for a 2013 paper that explored the motivations of Americans to study the language. As the following table reflects, the main factors the students cited were “interest in the language,” “employment,” and “interest in Arab culture/history.” (Dr Brosh notes in his paper, “Because the three reasons ‘Advantage when job hunting,’ ‘Work at a government agency,’ and ‘Work in the Middle East’ are employment-related, I grouped them together as a composite ‘Employment’ [factor].”) 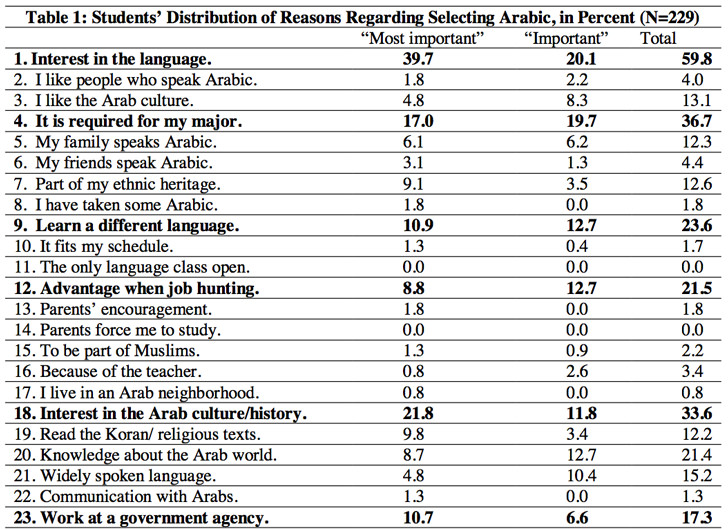 Survey responses from American students as to their motivations for studying Arabic. Source: Dr Hezi Brosh

Roughly speaking, for every five US students of Arabic enrolled in introductory-level courses, there is one student engaged in advanced studies of the language. This suggests that most students have little prior experience with the language, and it also raises the question as to how advanced their skills can become, even in more intensive courses in the US. Some suggest that it will take second-language learners five years of study or more before they are fluent enough to study at the postsecondary level in Arabic.

In order to further raise the level of fluency among non-native speakers in the US, government agencies and educators are taking new steps to expand Arabic studies at the high school level. Initiatives such as the STARTALK Language Program and The Language Flagship Program are squarely aimed at boosting Arabic studies at the high school level, and therefore better supporting more advanced language studies in postsecondary programmes. It happens that both STARTALK and Language Flagship are also directly supported by national security interests (the National Security Agency and the Department of Defense respectively).

Government agencies and academic institutions in the US are also collaborating to boost student mobility in a further attempt to improve Arabic language skills among American students. Just over 2,100 American students studied in the MENA region in the year 2000. A decade later, in the 2010/2011 academic year, the number of US students in the region had increased to more than 7,200.

There are a few factors at work here. Most obviously, the growth in mobility to Arab-speaking states tracks with the underlying growth in Arabic language studies in the US. But increasing numbers of US students heading to the region are also being supported by expanded scholarship programmes as well as developing linkages between academic institutions in the US and those in MENA countries.

The Critical Language Scholarship Program (CLS), for example, sends US Arabic-language students to study in Jordan, Morocco, and Oman. Similarly, the Boren Scholarships “provide unique funding opportunities for US undergraduate students to study less commonly taught languages in world regions critical to US interests.” And more institutions are following the lead of Montana State University – which has been active in the region since the mid-1990s – in partnering with local universities for joint programmes or integrated study abroad options.

In fact, for a growing number of US universities offering Arabic majors, such as Georgetown University, study abroad is an academic requirement. As Elliott Colla, the university’s chair of Arabic and Islamic Studies, told NAFSA, “Our programme is intensive by American standard. Still, we understand that fluency is reached only when students immerse themselves in the culture and society of the languages they are studying.”

It seems likely that schools both in the K-12 and higher education levels will look to foster this dramatic growth in Arabic studies in the US, which may in turn fuel US outbound mobility to the MENA region in the years ahead.