A recent report commissioned by the Austrian Federal Ministry of Science, Research and Economy (BMWFW) explores a number of imbalances in long-term degree mobility between countries within the European Higher Education Area (EHEA). The EHEA is made up of the 47 participants in the Bologna Process, a long-term effort aimed at greater harmonisation and integration of higher education across Europe.

The report, called Student mobility in the EHEA: Underrepresentation in student credit mobility and imbalances in degree mobility finds a variety of imbalances between inbound and outbound student numbers and notes that these are often heavily influenced by a country’s geographic location, language of instruction, and relative GDP of the country, among other factors.

The report’s findings were used as a key input for the Bologna Follow-Up Group’s (BFUG) Mobility and Internationalisation working group regarding differences and inequalities in student mobility in the EHEA. The analysis focuses on student degree mobility, defined by the authors as long term mobility of students with the purpose of completing a whole study cycle, and the acquisition of a degree (at the Bachelor, Master’s, or PhD level) abroad.

The number of internationally mobile students worldwide continues to grow rapidly. Earlier this year, we reported that the number of students moving between countries to study is likely to approach five million in 2014.

The EHEA report notes that in 2010, nearly three million degree-seeking mobile students were reported to the UNESCO Institute for Statistics, representing about 2% of the worldwide student population. Almost half of all globally mobile students study in a European country, with a quarter studying in the Americas. One in five mobile students choose a host country in Asia or Oceania, while only 2% study in an African country.

In comparison, the region defined as Oceania – primarily Australia and New Zealand – boasts an even greater import-export ratio. Countries in Oceania receive 17 times more mobile students than they send abroad.

For Asia, the imbalance skews in the other direction. While Asian countries account for fully 54% of globally mobile students, they host only 13% and are thus considered exporting countries. 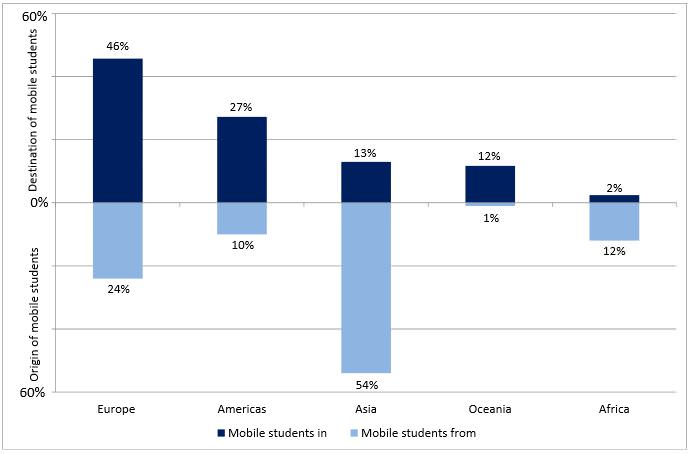 Destinations and origins of mobile students across continents, 2010. Source: UNESCO Institute for Statistics

Some of the richest data in the report highlights imbalances in mobility between specific countries. For example, the UK, Austria, France, Switzerland, Denmark, the Czech Republic, Spain, and the Netherlands are above-average net importing countries, sending far fewer students abroad than they receive.

Hungary, Finland, Germany, Sweden, Belgium, Italy, and Armenia are also considered net importers, though their import-export ratios (a measure derived by dividing the net incoming mobile students by the number of outgoing mobile students) tend much closer toward the EHEA average.

Meanwhile, Ukraine, Azerbaijan, Kazakhstan, Norway, Greece, and Portugal have relatively balanced import-export levels. (Data for Albania, Andorra, Bosnia and Herzegovina, the Holy See, Montenegro, Macedonia, and the Russian Federation is incomplete as those countries did not report their numbers of incoming mobile students.) 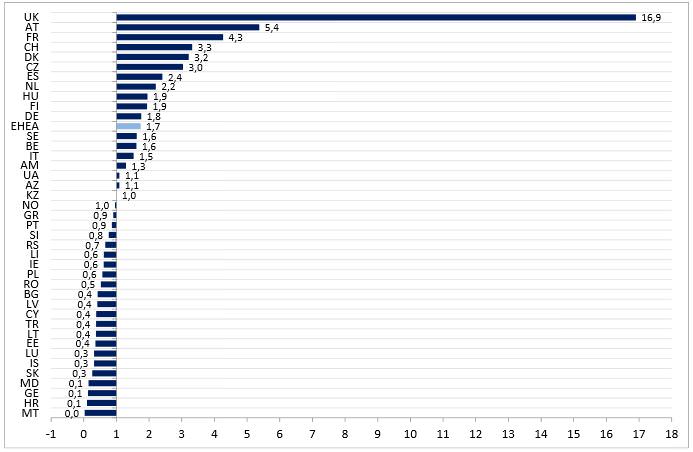 Import-export ratios across the EHEA, 2010. Source: UNESCO Institute for Statistics

Liechtenstein, Luxembourg, and Cyprus showed extremely high shares of outgoing mobile students (over 50%) as well as high levels of incoming mobile students (over 30%). “In the case of Luxembourg and Liechtenstein, the size of the country as well as of the higher education system itself could be explanations for these findings,” notes the report. “Cyprus’s size – but more importantly its cultural, geographical and historical proximity to Greece and the UK – can be seen as explanatory factors for the high share of students studying abroad: almost half of outgoing Cypriot students study in Greece and another 42% of outgoing Cypriot students live in the UK, the former colonial power.”

The United Kingdom represents the biggest net importing country of all EHEA states, and most EHEA countries send far more students to the UK than they receive back.

The greatest imbalances in this respect involve Ireland, Germany, Cyprus, and Greece. The Institute for Advanced Studies in Vienna, the centre that conducted the EHEA study, provides interactive graphs to better illustrate both inbound and outbound mobility flows for all EHEA countries.

While the ministers responsible for higher education in the EHEA encourage the member countries to work towards more balanced mobility, the report notes that the desirability of achieving balance (or maintaining a current imbalance) in mobility can differ depending on the perspective of the country. Policy goals at the state or institutional level, for example, as well as economic trends and other factors influence the degree of imbalance.

Imbalanced mobility flows also occur between regions with varying GDPs per capita. Students from countries with a lower GDP (for example, in the South and East) tend to study more frequently in countries with a higher GDP (such as countries in the North and West) than vice versa.

Language was also found to be a factor, with incoming mobility flows to countries with English as an official language are not only absolutely but also relatively imbalanced. Students from non-English-speaking EHEA countries represent almost 5% of the total student population of Malta, the UK and Ireland combined, as one example, whereas outgoing students from these three countries only make up for 0.04% of the student population of countries with another official language than English.

The report concludes with a call for improved data collection that would allow future research to study imbalances in certain fields of study, across geographic regions within countries (for example, border regions or capital cities) and in specific language zones of a destination country (e.g. French, Italian, German mobile students in Switzerland).

These proposed additions, say the study’s authors, would provide a more nuanced picture of mobility within the region and highlight examples of imbalances at the sub-national level.

In closing, a quick note on the methodology for the current study. The report looks at two types of mobility imbalance:

For the sake of greater clarity in the more compact summary we have provided here, we have focused on absolute imbalances in today’s post. Readers who would like a closer look at calculations and observations concerning relative imbalances are encouraged to consult the full report.