In a major change to the system of undergraduate admissions for Spanish universities, a royal decree recently removed the Selectividad exam as a mandatory entrance requirement for foreign students. The move is expected to pave the way for a future increase in demand to study in Spain.

On the domestic front, the country is considering overhauling its student grants system to adopt a loans system instead. ICEF Monitor reviews each of these developments in turn, and their impact on student mobility.

The Selectividad is administered in Spanish in the home countries of about 7,000 prospective inbound international students each year, according to the Universidad Nacional de Educación a Distancia (UNED).

Undergrads from countries with certain academic linkages to Spain, for example those from the EU and China, were already exempt from the test as long as they had passed their own country’s university exams.

The new decree eliminates the mandatory requirement of the Selectividad immediately for all foreigners. Students now only need to possess certifications recognised as equivalent to the Spanish Baccalaureate.

But while the test’s days are numbered, LOMCE gives universities the compensatory right to administer their own entrance exams. In addition, they now can create different entrance requirements for different degrees, consider non-academic factors when determining admissions, and offer conditional admission to foreign students.

In 2012/13, total international student enrolment in Spain was 73,639. The strongest senders to Spain – as seen in the chart below – were Italy, Colombia, China, Romania, and Morocco. 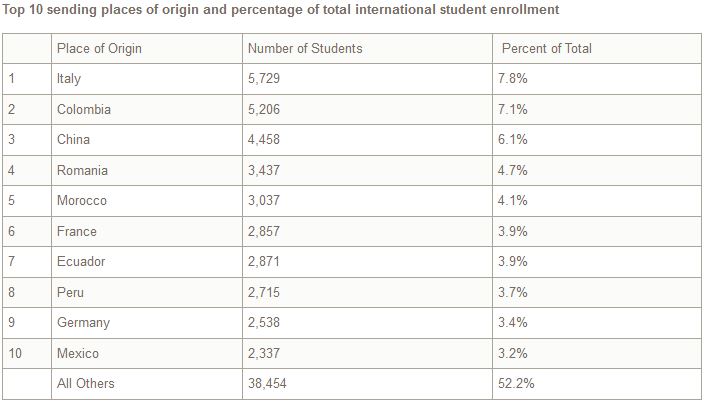 The Spanish government hopes for higher inbound mobility, and with websites such as Colombia’s universaria.net.co describing the “delight” of students now freed from the Selectividad, those expectations seem well founded. Spain’s Erasmus programme has already helped make the country a top destination for short term international students; the banishment of the Selectividad will leverage Spain’s lofty study abroad credentials while drawing students into long term programmes likely to boost university finances and the national economy.

It will take several years before we see the full impact of resultant mobility shifts, but numerous effects will be felt immediately.

Dr Carlos de las Heras Pedrosa, Vice President for Institutional Relations and the Chancellor’s Cabinet at Universidad de Malaga, believes there will be more interest in the Spanish higher education system (particularly in BAs) and that the change will facilitate their existing foreign applications for degrees starting in September 2014.

“Medium and long-term effects will include higher demand on pathway courses for higher education (e.g. language courses and specific subjects courses), an increase in the number of international students, development of new degrees, new infrastructures at universities, and benefits for the Spanish economy as a whole.”

A change for the better

Observers also predict that universities will offer more English BAs. Pablo Salvador Blesa Aledo, Vice Dean International Relations and Communication at Universidad Católica San Antonio de Murcia (UCAM), explains: “The former requirement of Selectividad created an artificial barrier to the demand to study in Spain. Before, such a thing was not incentivised by the fact that in order to be accepted, the foreign candidate was obliged to pass the Selectividad in Spanish and to master the Spanish language in a high degree – even when the degree was offered in English.”

Mr Blesa gives a detailed example of the problems caused by the Selectividad: “Let’s take a student from the Russian Federation who is willing to study an undergraduate degree in Business Administration at UCAM, being delivered in the English language. Although possessing the right high school degree in his country, he was forced to travel to Moscow several times to validate his degree and other documents. Let’s imagine this student speaks English fluently and some rudimentary Spanish. The degree of Business at UCAM is in English, but this Russian student must be fluent in Spanish and take the Selectividad in Spanish to access the programme in English. Hence, he must be perfectly trilingual just to start with.”

Thus, Mr Blesa sees the effects of the Selectividad’s disappearance as “immediate, beneficial, and traceable,” and adds:

He continues: “The cancellation of Selectividad will impact our marketing and recruitment strategies and results. UCAM is an international university where national and international students study in a bilingual environment (Spanish-English). As we progressively double our degrees in English, we can compete with better fees and a high quality of living for a better price, without handicapping quality.

More than 200 foreign students study Spanish as a foreign language at our campus every year. UCAM is accredited centre for DELE, the official diploma in Spanish language. With a more ample offer of degrees in English and a very wide range of degrees (Bachelors, Masters and PhDs) in Spanish, international students have the chance of studying in Spanish, in English, or in a mix. I think this is our strength. Without Selectividad, now the avenue is wide open for students to choose the degree and the language in which that degree is delivered.”

Tourism sector sees a boost, too

ICEF Monitor also caught up with Elías Bendodo, President of the Málaga Costa del Sol Tourist Board, to hear his views on Spain’s popularity as a destination, which sees no slowing down.

“Spanish tourism is on a high; in 2013 a historical number of international tourists was reached: 60.6 million. Tourspain predicts a 5% increase of this figure for 2014. As far as the Costa del Sol is concerned, 9.5 million national and international tourists visited this beautiful province last year, and for 2014, we expect to welcome 10 million tourists. In addition, destination loyalty is very high, as 80% of all visitors have been here before, and 39% have come to Spain already 10 or more times.

Even though there is a rise in tourists, this rise has not yet arrived at the language schools, but they are positive regarding a future increase of students thanks to the higher number of visitors to the region.”

Some resistance to change

Not everyone believes removing the Selectividad is a good idea for Spain. Some critics have raised questions regarding the equity and fairness of the entrance exams destined to replace it. These questions are important, because while foreigners generally find the test difficult, students within Spain don’t have much trouble with it. In 2014, pass rates were above 95% in regions such as Asturias, País Vasco, La Rioja, Castilla-La Mancha, and Navarra.

At least two of Spain’s autonomous regions have already revealed intentions to develop their own standardised entrance exams for universities. Catalonia, located in northeast Spain and encompassing Barcelona, was the first to make an announcement, followed by the sprawling southern region of Andalusia, home to more than eight million people.

Whether the replacement tests will result in pass rates for Spanish citizens that are as high as the Selectividad is at present unknown.

Equally uncertain are the requirements and processes that Spain’s universities will now transition to for assessing and admitting foreign students.

Bob Burger, Director of Marketing for Spanish language school Malaca Instituto, points out that while the Selectividad is no longer a mandatory requirement for foreign students, it may remain a viable approach to preparing for university studies in Spain.

“My understanding is that if overseas students use their high school grades from their own country to enter undergraduate degrees [in Spain], the [credential evaluation process] will convert their marks into a comparable mark on a scale up to a maximum of ten,” explains Mr Burger. “The problem here is that the most popular degree subjects and the hardest to get into require scores of around 12 or more. These higher scores are achieved by taking Selectividad Part 2 which is intended precisely to raise students’ scores and make them more competitive. Part 2 increases the maximum mark possible to 14.”

In other news, the Spanish government is considering replacing its student grant system with one of student loans. Montserrat Gomendio, State Secretary for Education, Professional and Vocational Training and Universities, suggested the system would mimic that of Great Britain. She said students there “borrow money from a student loan company, paying it back in comfortable, interest-free quotas.

Spain has 82 universities that bestow 7,000 degrees to approximately 1.5 million students each year, and 800,000 of those students attend public universities and pay between €680 and €1,400 in annual tuition. Students receive grants according to family income, place of residence, and academic performance.

Secretary Gomendio has suggested this system is unsustainable, and has cast the debate in terms of impact on national finances. She has stated that even in countries with free education, schooling is not really free. It’s simply a matter of “who pays, how, and when.”

But critics of the loans proposal counter that in the UK student debt can reach exorbitant levels, and question why Spain would want such a system. Luis García Tojar of the Complutense University of Madrid said the change would bring about “negative effects on society and universities, as students [would] have two options: borrow or lose their certification.”

Other critics have been more blunt, describing the plan as a scheme to benefit bankers, or even part of a politically motivated assault designed to end public education in Spain. For such critics, the proposal is seen as the beginning of a slippery slope that could lead to a US-style system that saddles students with lifelong debt.

At this moment, no official decision has been made, and Minister Wert has even seemed to walk back on earlier comments, lately describing Spain’s existing grants system as a “pillar of equity,” and claiming that, “at no time from any point of view” has he suggested that the Ministry of Education was working to replace the grants system.

But Minister Wert has also left himself maneuvering room by saying that the issue should be subject to the “possibility of reflection,” and adding that resolving the problem of university funding is an issue that is on the horizon.

Educators and agents will want to keep an eye on the situation. A change in the system could spur many Spanish students to look toward education alternatives within the EU and overseas, resulting in far-reaching impacts on Spanish mobility.

This entry was posted in Europe, Higher Education, Regions, Spain.