New Zealand is taking its goal to double the value of its international education sector by 2025 (to NZ$5 billion) very seriously. In 2013, the government invested an additional NZ$40 million in funding over four years to promote the country as an international study destination, with the guidance that special attention be paid to key markets such as China, India, Southeast Asia, and South America.

The money has helped to create a new marketing campaign – Think New – that is currently rolling out in key markets. In addition, in line with growing evidence showing how important a country’s visa, work, and immigration policies are to its ability to attract – and retain – international students, New Zealand is also introducing new visa processes to make it easier and faster for students to get the documentation they need to study in the country.

The two-pronged approach – (1) smart, targeted marketing that as we will see, involves and leverages institutional and agency partners, plus (2) the facilitation of visa logistics – stands to provide an amazing case study illuminating best practices in international student recruitment.

We’ll start with recent international enrolment trends in New Zealand, then move on to the Think New campaign and the country’s new online visa services.

Overall, 2012/13 was not a standout year for New Zealand in its goal to build its international enrolment. The number of international students approved to study in New Zealand (64,232 students) fell 7% from 2011/12 – matching a 7% decrease in 2010/11. The government points to factors such as “the high New Zealand exchange rate, increased international competition for export education and the February 2011 Christchurch earthquake” as contributors to the recent dips in enrolment.

The Chinese international student population (the largest single foreign source for New Zealand, as in many leading destination countries) remained more or less stable, but the proportion of students from South Korea decreased by 21% and from India by 7%.

This is all amid a longer-term context of declining or flat international student enrolments since 2003.

“Our research shows that New Zealand is close to halfway behind the awareness levels of key competitor countries: we’re just not top of mind when students overseas are considering their options.”

This is despite some of the world’s most breathtaking scenery, a safe and open-minded environment, and an education system noted for:

The Think New campaign aims to highlight facts like these, and includes stunning photography and video. 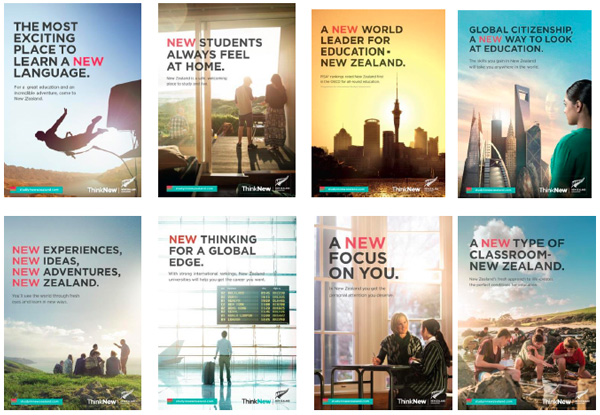 Here are a few smart components of the campaign: 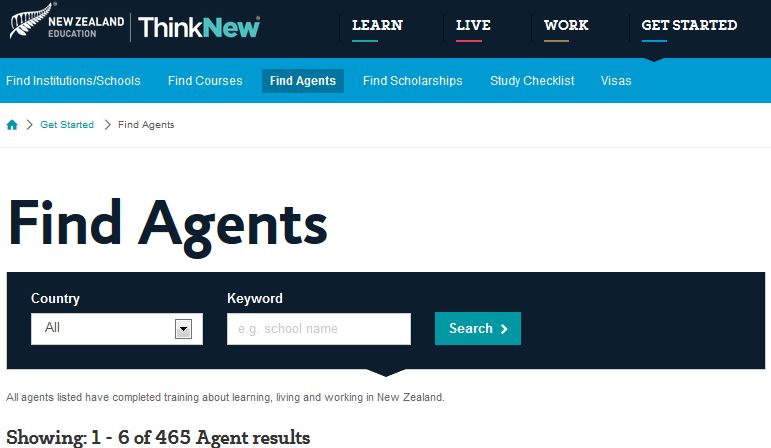 The campaign is being delivered in eight languages (Chinese, Thai, German, Spanish, Portuguese, Japanese, Korean and Vietnamese). Think New launched in China in April, and India and Japan have been launched more recently.

Agents interested in accessing and using Think New can simply register at The Brand Lab, an online campaign resource hub, for all materials.

Furthermore, there are nearly 40 Think New staff ready to help with any aspect of the campaign in 15 countries. 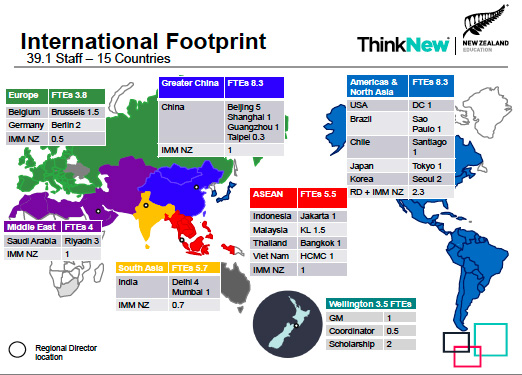 Attraction is one thing, enrolment is another: New Zealand’s visa processing innovations

As much as launching a sophisticated marketing campaign is of course essential to international student recruitment, so too is a system that allows qualified students to make their way into the country to study as conveniently as possible. To this end, Immigration New Zealand (INZ) has launched Immigration ONLINE, which improves visa processing services for international students as well as saves the government money and improves security. Here are some of the features of the new system:

Mr Andrews explains that Immigration ONLINE “is currently going through User Acceptance Testing” and will be launched in increments to ensure it is “ready and able to be successful,” and that current ways of applying for visas will continue for some time because not all students will automatically rush to the new technology.

In addition to online technologies, INZ is also running a partnership pilot project, begun in late 2013, with about 25 high-quality education providers in the country. This project, says Mr Andrews, allows the providers to nominate “offshore student visa applicants for priority processing – if they are satisfied the students are genuine and have sufficient funds.” INZ then conducts the rest of the process (e.g., health and character checks) and provides feedback to the providers.

Mr Andrews is careful to note that, “the pilot will not allow partners to decide visa applications, replace any of [INZ’s] current immigration instructions or allow non-advisors to give immigration advice.”

If it is successful, the pilot group will likely be extended and some functionality of Immigration ONLINE will be incorporated for still more efficiencies and speed of visa processing.

Notable (and laudable) about both New Zealand’s Think New marketing campaign and its immigration initiatives is the degree of coordination among various stakeholders in the country’s international education sector.

Industry groups, education providers, and foreign-based agents have all been consulted in the design and deployment of the initiatives.

Moreover, their expertise and particular roles in international recruitment are being actively leveraged in the execution of the campaigns and new visa processing systems.

It makes us think, in particular, of the growing tide of demand at international education events we’ve attended over the past few years for greater harmonisation among key industry players; you can read this article, written after NAFSA in 2012, for an example. We will be watching New Zealand’s strategies as they develop over the coming months and hoping they result in a whole new set of best practices in international student recruitment.