As competition for international students intensifies around the world, the European Union is increasingly interested in promoting member countries – and indeed, the entire Eurozone – as a top study abroad choice.

Today’s ICEF Monitor post looks at the findings of several new reports as they relate to trends in participating EU countries’ efforts to attract international students – including work and immigration policies, which are frequently viewed as key elements of a study abroad nation’s competitiveness.

A decade of growth

International students a substantial part of many EU populations

Overall, the EMN report found that international students compose an important proportion of the non-EU population in many EU countries: 21% of all new first residence permits in the report’s participating countries were issued for education reasons.

Despite many countries’ efforts to facilitate the entry of Erasmus students (students from the EU going to other EU countries to study), the report notes that only “1.4% of the total number of first permits issued in Member States in 2011 for the purpose of study” were given to students coming under the high-profile Erasmus mobility programme.

National strategies in use to attract foreign students

In terms of the national strategic goals for wanting to attract international students, the report listed two:

Strategies used to attract foreign students vary from country to country, and may include:

Many of the countries participating in the study are putting the focus on attracting the “brightest and the best” students … “mostly masters and PhD students who contribute to the knowledge base of specific sectors important to the economy.”

Some (Finland, France, Ireland, Luxembourg, Netherlands, Poland, Portugal, and Spain) are setting clear targets for the number of international students they want to attract (e.g., Finland wants to increase the number of foreign degree students by approximately 77% from 11,303 in 2007 to 20,000 in 2015, and Spain is looking to boost its international student population from 4.9% in 2012 to 10% in 2015).

And others plan to amend their policies on international students. For example, The Netherlands intends to more effectively prevent “misuse of the student route” by setting targets for students and collecting biometric data during the visa application process. “Poland intends to introduce preferential admission and stay regulations for international students and university graduates.”

Hungary and Latvia appear to be the only countries without a national policy on international students. In Latvia, each institution determines its own needs and strategies for attracting foreign students. “In Hungary, only an action plan is in place which aims to strengthen the education of ethnic Hungarians living outside the territory of Hungary.”

The survey revealed the following internationalisation strategies currently used by HE institutions:

The survey found that the most popular priorities for action were:

In order to execute some of these strategies, universities in EU countries may be conducting their marketing…

The EMN report assesses that there are two types of policies in place in the participating EU countries regarding employment after graduation for international students:

For further details on this topic, please see our article from last year, which gives an overview of the intentions of 6,200+ international students at 25 universities in Germany, France, the UK, Netherlands, and Sweden.

The economic contribution of international students

Despite the economic contribution of international students, actual revenues realised thanks to foreign students vary due to the different types of educational systems across the countries. Some, for example, offer free access to education and low student fees.

The EMN report provided a table that shows the sources of international student revenues for select participating countries: 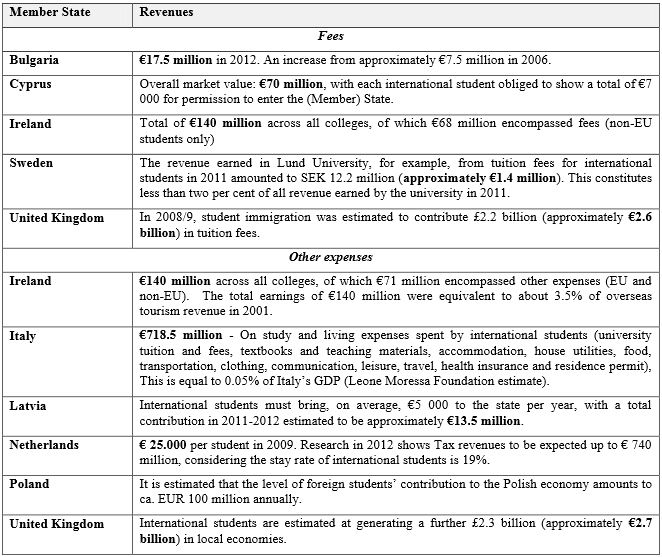 Source: EMN’s “Immigration of International Students to the EU” report

Right at the outset, EMN’s report makes it clear that increasingly, the countries that provided data for the study are well aware of international students’ potential to remain in the country and add needed workforce skills.

And it moves on to declare: “States with a more flexible policy [on allowing international students to work during and after study] might be considered as more ‘attractive’.”

It seems, from the growing number of non-EU international students choosing EU countries to study in, that both national-level and institutional-level strategies are on the whole working well to attract students from outside the EU.

Looking for room for improvement, the report concludes:

“The overall aim of improving EU and national strategies and policies is to ensure that the EU can be considered as a world centre for excellence in education.

Further legislative action at the EU level, aiming to provide for further improvements in admission conditions, rights during stay, including mobility, and ensuring safeguards for third-country nationals, in line with Treaty objectives, is likely to make an important contribution to delivering this objective.”

The EMN report and EUA survey arrive at the same time as two more pieces of research; the first being the United Nations World Tourism Organization’s (UNWTO) new “World Tourism Barometer.” Results show that international tourist arrivals in Europe were up by 3% in 2012, a “very positive result in view of the economic situation.”

UNWTO Secretary-General Taleb Rifai said of the modest growth in European tourist arrivals: “2012 saw continued economic volatility around the globe, particularly in the Eurozone. Yet international tourism managed to stay on course.

The sector has shown its capacity to adjust to the changing market conditions and, although at a slightly more modest rate, is expected to continue expanding in 2013.

Tourism is thus one of the pillars that should be supported by governments around the world as part of the solution to stimulating economic growth.”

Zeroing in on the continent, the European Travel Commission’s (ETC) latest “European Tourism in 2013: Trends & Prospects” report indicates that “international arrivals and nights to Europe for the first quarter of 2013 point to a slower, but continued growth for most of the reporting destinations.”

Like tourism, international education seems relatively resistant to shocks to the overall economy, but as emerging economies and developing markets continue to advance in both sectors, Europe will need to fight harder to remain a competitive and attractive destination.