Beyond forecasting: how to use scenario planning to map the future

The following is a guest post by Woody Wade from Wade & Co, a management consultancy specialising in future scenario planning.

More and more, educational institutions, associations, and student recruitment agencies are turning to a technique called scenario planning to help them visualise how their future recruiting landscape could change over time. By using this creative yet structured process to envisage alternative future terrains, they can craft more flexible marketing strategies today.

What is scenario planning?

Planning for the future? Of course you are. We all are. But if you want a solid plan, you need to base it on a solid vision of the future – and in a constantly changing world, how much information do you have about the future that you can really count on? Probably not much.

In some form or another, almost every organisation uses a process of forecasting to try to project the way things will develop for them in the future. Basing plans on such forecasts may be acceptable if your time horizon is just a couple of years, but for an institution developing a strategy meant to assure its competitiveness five or ten years from now, forecasts and projections may be worse than merely unreliable – they may in fact be dangerous.

This is because projections paint a picture of the future as if it will be a variant of the way things already are today. Take the current numbers, tweak them a bit, extrapolate into the future, and – hey presto! – you’ve created a picture of how your markets will look five or ten years from now.

Or you think you have, and therein lies the problem.

By forecasting some of the key variables that determine the dimensions of your international recruitment landscape (variables such as current enrolment growth from your key source markets, availability of financial aid, population growth, etc.), your gaze is firmly focused on a set of essentially marginal details.

Our contention, on the other hand, is that it is not so much these variables but rather bigger, broader forces and developments that are more likely to have a dramatic impact on how your world changes in the years ahead.

There are all sorts of shifts in the global marketplace that could affect your institution’s or company’s future success as a recruiter of international students, such as:

We believe it is this latter type of change – fundamental and often unexpected – that has the potential to turn your world upside down (for better or worse). Yet changes like these are not based on mere extrapolations from the present, so they are rarely, if ever, captured in even the most detailed forecasts.

This is where scenario planning comes into play. By imagining how those uncertainties could play out, you can generate the outlines of a range of different future scenarios – alternative ways your recruitment environment could realistically develop.

Sadly, even though its logic helps you visualise how different futures could unfold, scenario planning can’t tell you what will actually happen. But it is not intended to be a tool for predicting the future, but rather for exploring it. Using scenario planning techniques, you generate plausible and eye-opening ideas about what could happen in your market environment.

With these insights, you will then be able to recognise that each potential future landscape is associated with certain opportunities and threats. This in turn allows you to ask critical questions about your readiness to compete:

Thinking about the future in terms of alternative landscapes means you can make more flexible, more thoughtful, and better strategic decisions today. Instead of putting all your eggs in one basket, you can develop a more nuanced approach to your recruiting strategy, and better anticipate how the lay of the land could change.

At the 2013 EAIE Conference in Istanbul, we ran a mini-workshop aimed at generating four plausible future scenarios for Asian student recruitment.

Normally the structured approach we use to define future scenarios follows a process that takes a day or so to delve into, but in the short time we had available, we focused the discussion on just three key steps.

First, we elicited from the group a number of so-called “driving forces” – trends or developments that could have an impact, directly or indirectly, large or small, on how recruiting Asian students could pan out in the future. These factors could include almost anything, but scenario planners often use a shorthand called “PEST” to focus the list of influential trends on these four categories:

In the workshop, the list of PEST factors we came up with included such potential forces as changes in immigration rules (Political), currency imbalances (Economic), the role of religion (Societal) and the quality of simultaneous translation delivered online (Technological), among several others in each category.

Altogether, the group listed 21 different potential drivers of change; not bad for just a few minutes’ work (although when you have more time, workshops can sometimes come up with 150 or more driving forces, ranging from the trivial to the seismic).

The second step was to filter this list of driving forces down from over 20 to only two – the most “critical uncertainties” of them all.

This is necessary for two reasons: you just can’t work with 21 variables (let alone 150); you’d be paralysed. And, by identifying the two forces that could each have the greatest potential impact on the future, while at the same time being the most uncertain to know in advance how they will unfold, you define the parameters of four different scenarios that realistically have the potential to emerge – and make a big difference if they do.

Looking ten years ahead, the two factors that our group decided were the most critical uncertainties were:

The third step was to combine these two critical uncertainties into a matrix, like this: 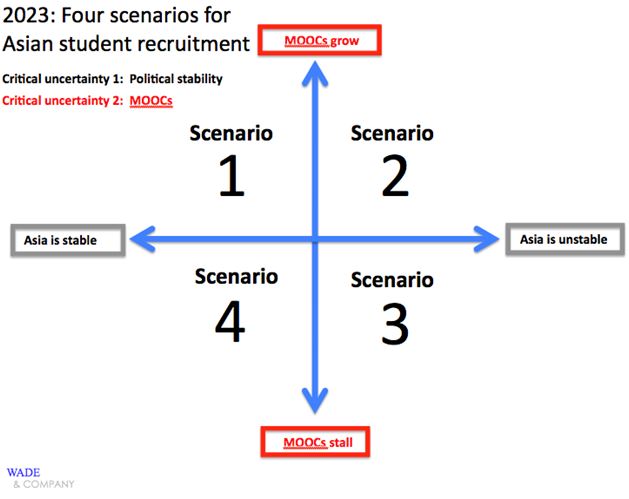 The resulting quadrants of this matrix each represent a different, but still possible, future “landscape” in which an educational institution or international student recruitment agency interested in recruiting Asian students may find itself operating in ten years’ time.

What would be the special characteristics of each of these landscapes, from a recruiting point of view? What unique challenges and opportunities would each one present to a marketing team?

Here is a taste of the ideas that workshop participants came up with (greatly simplified!):

This example was designed so that the workshop participants could return home and go through this exercise looking at issues that are highly specific to their individual school or recruiting agency, and assess their possible strategic response to each scenario based on their actual strengths and weaknesses, their academic offerings (or those of their partners), and their degree of adaptability to change.

A December 2013 scenario planning exercise undertaken by English Australia provides another interesting example. In the Australian example, the two dimensions they explored were “alignment” and “competitiveness.”

Within this process, alignment can be understood to encompass such factors as:

Competitiveness, meanwhile, refers to such factors as the sustainability of the ELICOS business model, the regulatory environments, the prevalence of price competition, the relative cost of living in Australia, general economic conditions, and the competitive context for Australian providers.

The following four scenarios were established when these two key forces were mapped against each other: 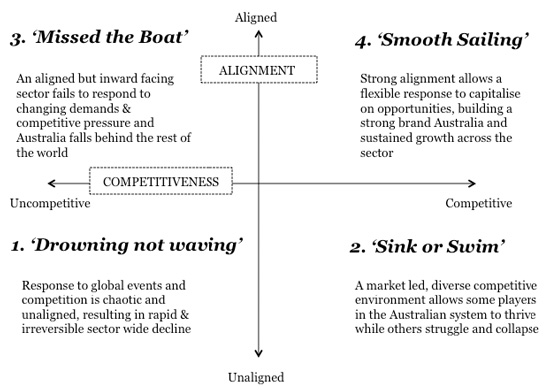 The four scenarios defined during the English Australia planning process.

The accompanying report from English Australia provides both summary and expanded narratives for each scenario. For example, “Drowning, not Waving” is introduced as follows:

“The lack of a commonly held strategic vision and plan for the international education industry results in uncoordinated and contradictory policy settings, a focus on managing risk that removes all incentive and capacity to innovate and an industry that is focused internally rather than on external opportunities and on survival rather than growth. The industry gradually shrinks to a small number of providers who are all delivering the same types of programmes to a narrow profile of students. The Australian educational offering is small, stale and unexciting.”

And, at the other end of the spectrum, the “Smooth Sailing” scenario is summarised as:

“The ELICOS sector contributes to and operates within a context of strong alignment across all international education stakeholders supported by a focus on best practice in all aspects of business and academic practice that provides a framework that facilitates a flexible approach to innovate and capitalise on opportunities resulting in strong overall growth across the Australian international education sector.”

English Australia Executive Director Sue Blundell has said of the scenario planning process, “This has been an exciting piece of work to develop. By naming relevant, challenging, plausible and clear scenarios for the future, we can enable consideration about what might be done proactively to influence the future toward desired outcomes, and what factors that are beyond direct influence might require mitigation or preparation action.”

By defining the major forces that may affect markets and organisations over the long term, we can explore scenarios for many different possible futures. We can also consider well in advance what steps we might take or what strategies we might employ to help ensure we meet our long-term goals – all of which is a considerable step up from simply forecasting based on what we know for certain today.

Harvard Business School graduate James “Woody” Wade is a futurist, writer and consultant who has worked for a number of high-profile organisations such as the World Economic Forum and Ecole hôtelière de Lausanne. As a specialist in scenario planning, he helps schools recognise and understand the critical uncertainties that have the greatest potential to change their future landscape – and thus affect their long-term success.

He is the author of Scenario Planning: A Field Guide to the Future and is frequently invited to speak on the methodology and conduct workshops at events and conferences in Europe, Asia and North America. One such example is the 2013 EAIE Conference in Istanbul, where he and Frouke Gerbens (founder and managing partner of ABG International – Higher Education Management Solutions) conducted a seminar to a packed room. They will repeat this session at the 2014 event in Prague.