Countries with higher levels of English-language skills also have stronger economies, and their citizens enjoy higher per capita income levels and a higher quality of life. These are some of the findings of a global language survey released late last year by Education First (EF).

The 2013 study, the third edition of EF’s English Proficiency Index, ranks 60 countries and territories around the world by adult English proficiency.

While EF has been gathering proficiency data for several years, there are some important methodological changes reflected in the 2013 rankings. Seven countries – Estonia, Iraq, Jordan, Latvia, Slovenia, Sri Lanka, and the Ukraine – have been included in the index for the first time. Three others (the Dominican Republic, Pakistan, and Syria) have been dropped from the index due to insufficient data. And whereas previous editions of the EPI have relied on multi-year data sets gathered between 2007 and 2011, the 2013 ranking is based on a single-year’s worth of test data from 750,000 adults who took English tests administered by EF over 2012. EF notes the move to single-year data reporting is meant to allow the EPI to track changes in English proficiency more closely year-over-year.

EF has noted in the past that its test data reflects the patterns seen in smaller, more scientifically controlled studies. However, one necessary caveat in interpreting the EPI rankings is that the EPI is not a statistically controlled study. The test subjects completed a free test online on a voluntary basis and as such, may not entirely reflect the overall English proficiency of a given country.

As The Economist has noted of previous EPI reports:

“[The test subjects] were by definition connected to the Internet and interested in testing their English…The test will obviously not reach poor and rural folk who lack Internet access. So if a country has an urban elite who are good with English, and a lot of rural poor people who cannot take the test, its score might be relatively inflated. In another country where nearly everyone is online but English skills are mediocre, the scores might be relatively depressed.”

Even so, the EPI is an ambitious global benchmarking study for English proficiency and the study report contains not only the 60-country ranking but also more in-depth country profiles, including regional breakdowns, for 11 major world markets.

Among its key findings for 2013, the EPI report notes:

The 2013 EPI provides as well several headline-grabbing correlations between English proficiency and economic and social development. As the report notes:

“Historically, speaking a second language, or more specifically, speaking a highly valued second language, was a marker of the social and economic elite… However, globalisation, urbanisation, and the Internet have dramatically changed the role of English in the past 20 years. Today, English proficiency can hardly be thought of as an economic advantage at all. It is certainly no longer a marker of the elite. Instead it is increasingly becoming a basic skill needed for the entire workforce, in the same way that literacy has been transformed in the last two centuries from an elite privilege into a basic requirement for informed citizenship.”

“Research shows a direct correlation between the English skills of a population and the economic performance of the country. Indicators like gross national income (GNI) and GDP go up… [The 2013 EPI] found that in almost every one of the 60 countries and territories surveyed, a rise in English proficiency was connected with a rise in per capita income. And on an individual level, recruiters and HR managers around the world report that job seekers with exceptional English compared to their country’s level earned 30-50% higher salaries.” 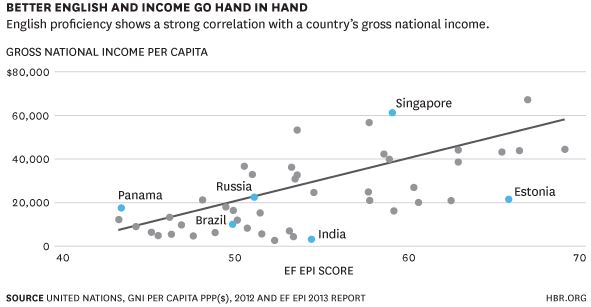 The 2013 report observes a weaker correlation to quality of life indicators such as life expectancy, literacy, and standards of living, and acknowledges that the link between English proficiency and human development is “more tenuous.” Countries that rank in the low and very low proficiency bands on the EPI reflect variable quality of life indicators. However, EF notes that no country ranked in the moderate or higher proficiency bands falls below the “Very High Human Development” benchmark on the Human Development Index.

The relationship between national EPI scores and corresponding rankings on the Human Development Index.

EF attributes the correlation between English proficiency and economic development (and so on to social development) to the important role that English skills play in driving export economies, attracting foreign investment, boosting service exports, and enabling international business and cultural links.

The report concludes by outlining some international best practices for building English proficiency. These can be understood as observed characteristics of countries with high EPI scores and include the following:

Much attention will be given to the national rankings in the EPI, and how the fortunes of individual countries rise or fall from year to year. However, these broader linkages between English proficiency and development – not to mention between English skills, investment in language training, and related government and education policy – are at least as interesting. These indicators can all reflect a country’s progress in strengthening its English proficiency but also its potential and characteristics as an international education market for the long term.