The number of new international students approved to study in New Zealand has dropped nearly 25% since the year before the first major earthquake, from approximately 46,000 first-time student visas in 2009, to about 34,700 last year (these figures exclude short-term language course students who entered on visitor visas).

ICEF Monitor takes a closer look at the figures, and offers a robust overview of the government’s progress towards its ambitious 2025 goals.

In November 2012 New Zealand’s Ministry of Education released a report showing that, for the first time, more New Zealanders possess a tertiary qualification than do not. The change was revealed in surveys collected during 2011, and brought the percentage to 52%, up from exactly 50% the year before.

However, the report describes the 2011-2012 international education market as “challenging.” It notes:

“A proliferation of new Asian and European education institutions, course options, and regional hubs in or close to some of New Zealand’s traditional markets for international students has meant there is less impetus for students to search further abroad for education solutions.”

In all, international fee paying student numbers were down 1% the first four months of 2012 compared to the same period the previous year. There were decreases of 2% in schools and 3% in private training establishments, but university and polytechnic enrolments each rose by 1%.

The ENZ report cites lingering aftereffects from the 2010-2011 earthquakes in Christchurch, which led to a dramatic falloff in enrolments throughout the economically crucial Canterbury region. School closures have taken place, and of the 31 schools originally announced to close or merge, 7 schools were closed, 12 are to merge and 12 will remain open.

Local officials have cited other factors contributing to the decline, including a strong New Zealand dollar and the global financial crisis. Derek McCormack, chairman of the International Policy Committee for Universities New Zealand, has mentioned global competition as a problem and voiced his concerns that other major participants like the United States are ramping up their marketing efforts. 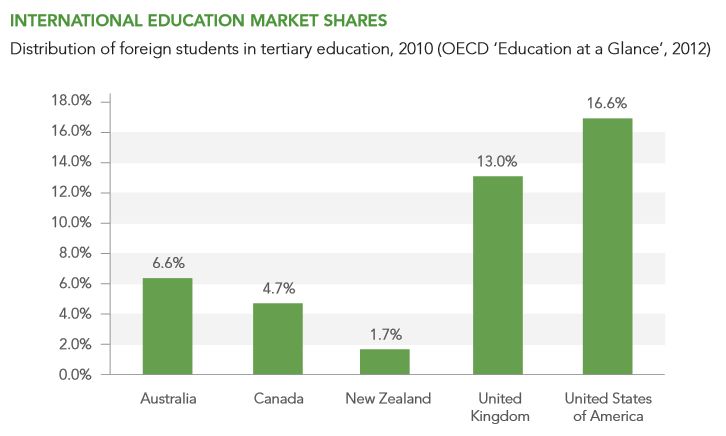 Efforts to reinvigorate New Zealand’s education sector have included new funding and a change in work rights for international students in the Canterbury region. Visa processing changes are also in the offing, affecting applicants from South America and Europe and, according to government spokespeople, streamlining the system.

But the visa system was embroiled in controversy earlier this month when 14 Chinese students were denied re-entry into New Zealand. Visa officials said there was doubt as to whether the students were fulfilling visa requirements, but bad word of mouth about the incident has spread rapidly on Chinese online forums, according to New Zealand Institute of Studies operations director Peter Chou.

This is the second incident in recent months where Immigration New Zealand (INZ) has ruffled a few feathers. In late 2012, four private tertiary education providers had their intake of foreign students suspended after they were found to be in breach of their obligations to international students. However, one month later, INZ resumed the processing of student visa applications for all four establishments.

There have also been rumbles on the local front, placing the country’s education system under fire. The Auckland University Students’ Association (AUSA) recently complained about new pressures being put on 2013 postgraduate enrolees and what it described as policy changes unfairly targeting those students. At issue is student allowance eligibility and a tighter cap on access to student support beyond 200 weeks.

The changes reportedly impact on 5,000 students, 40% of whom when surveyed on the situation said they were considering quitting their studies or looking for better supported opportunities overseas.

In the vocational sector, government involvement has had some welcome results.

Prime Minister John Key announced in January that his government plans to boost the number of people in apprenticeships by combining all the programmes into a nationwide scheme and providing fresh financial incentives for employers and workers to take on more apprentices.

Minister Joyce commented, “There is a big opportunity over the next few years, particularly with the rebuilding of Christchurch, to train more New Zealanders in vocational careers that will set them up well for their working lives.”

The New Zealand government has been vocal about an ambitious goal to double the economic contribution the international education industry makes to the country to NZ $5 billion by 2025.

In terms of specifics, periodic Statements of Intent list goals for certain time frames. The latest ENZ report takes a look at the 2011-2014 Statement of Intent and assesses the progress. Some of the goals listed as achieved or surpassed include:

Some goals listed in the 2011-2014 Statement of Intent as partially complete are:

A note on the final goal: nearly 25% of international students arrive in New Zealand via the agent channel. ENZ has stated:

“Agents are key players in [their] student recruitment strategy, and some New Zealand institutions want to grow their agent channels even further.”

And New Zealand continues to be active in building partnerships with key nations both near and far.

Just last week, Minister Joyce visited Malaysia for four days to showcase New Zealand’s education and trade opportunities as part of “New Zealand Week” in that country. An agreement was signed on the trip with the aim to increase New Zealand’s share of 50,000 Malaysian students who study overseas each year.

Another attractive neighbouring nation is China, the largest source market for the country and one in which ENZ has a “China Plan 2012-2015”.

And as part of the drive to build these ties within the region, many are calling for an increased focus on languages. Asia New Zealand Foundation executive director John McKinnon has said that it is vital for New Zealand’s economic, cultural and political interests that Asian languages are more widely taught in New Zealand:

“Countries across the world are now investing in Asian languages. This is a wake-up call for New Zealand.”

Minister Key also visited Colombia and Mexico to strengthen ties with those countries as well.

New Zealand was also recently awarded the title of “World’s Best Luxury Destination 2013” in the Shanghai Travelers’ Club 2013 Luxury Travel Awards, and given the Chinese’s propensity for elite brands, this could give the country a nice boost in this market.

In fact, after a decrease in incoming Chinese students in recent years, numbers have been up slightly since 2010 and ENZ expects them to rise by about 6% a year going forward (though it’s too soon to say what fallout might result from the visa cancellations of earlier this month).

To meet its target of NZ $5 billion in profit from international education by 2025, the government will need things to go well on multiple fronts. But there’s little doubt it is aware of the challenges ahead.

The contribution of each sector to the total value in 2011-12 is shown in the figure below. The largest percentage growth is expected in offshore services, which is expected to grow to NZ $500 million or 10% of the total target by 2025. 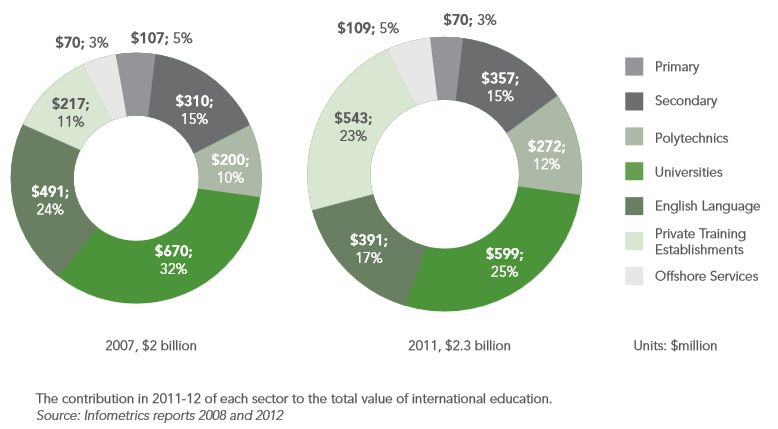