According to The Daily Dot, “Tumblr” surpassed “blog” in December as one of the most searched terms on Google, thus confirming the slow fall of the search for “blog” that started in 2009. Also, with over 88 million blogs and over 20 billion page views per month, Tumblr ranks as one of the top 10 most visited sites in the world.

These newer sites are captivating students the world over because of their highly visual interfaces – they are telling stories in seconds via photos and videos, and very compelling ones at that.

In this article, we’ll look at the rapid ascent of Tumblr, and see how education institutions might best use it to connect with students.

This is what Tumblr does, according to Tumblr:

“Tumblr lets you effortlessly share anything. Post text, photos, quotes, links, music, and videos from your browser, phone, desktop, email or wherever you happen to be. You can customise everything, from colours to your theme’s HTML.”

Noelle Visani, on Higher Education Marketing, provides an excellent summary of what one can do on Tumblr (so excellent we are quoting liberally from her in this article – please check it out to see why). She says: “Just like Twitter, Tumblr works as a social media platform that allows you to:

She notes that it’s free to start and just like WordPress (the popular blogging platform), “Tumblr enables you to:

The adage “Show me, don’t tell me” is often used in fiction writing circles, but it is very appropriate here.

‘Showing’ via photos and video seems to be the way younger generations, including college-aged students, are preferring to communicate, and Tumblr responds beautifully to this.

So rather than tell you more about what Tumblr can do, we’ll show you via these examples Ms Visani provides to three colleges that are using their Tumblr sites to powerful effect (complete with her descriptions of them): 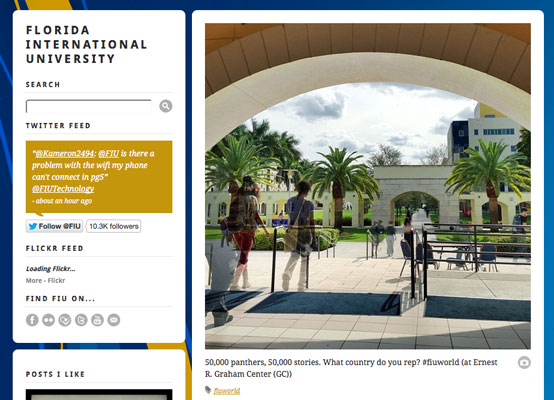 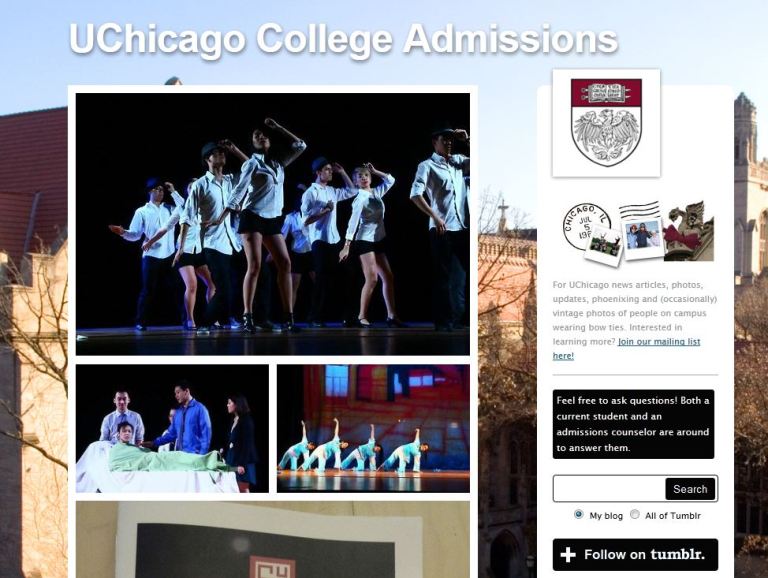 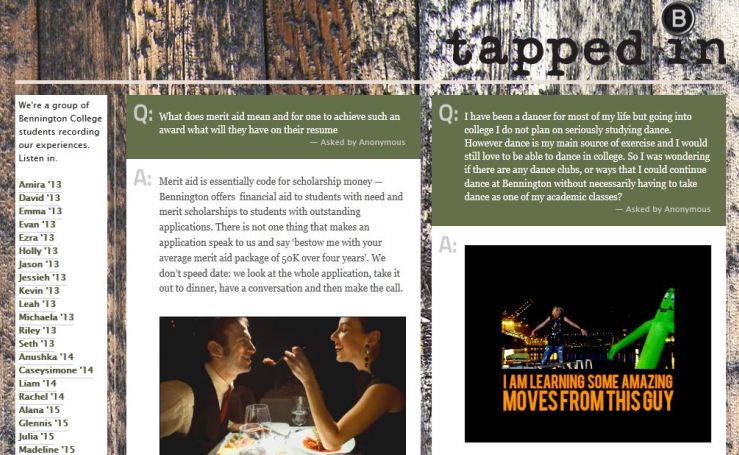 To our eye, the first two are the better examples, simply because they are so visual. As soon as you look at one picture, you want to check out the next.

They also do a nice job of incorporating humour, which lends a great informal touch to the sites.

Both sites suggest that students are having a fantastic time at the universities even as they also post academic and administrative information.

And most importantly, they are communicating all these things lightning-fast; information is both addictive and digestible.

You could spend an enjoyable minute on each site… or 30.

Who is using Tumblr?

The main target audiences for colleges and universities are current and prospective students, and Tumblr’s demographics skew very young: most are under 30.

If you want to be where your students are, you may want to consider a Tumblr site. Tumblr is growing by leaps and bounds, and it is proving to be very engaging for students. According to Forbes:

“In November [Tumblr] shouldered its way into the top ten online destinations, edging out Microsoft’s Bing and drawing nearly 170 million visitors to its galaxy of user-created pages, according to the measurement firm Quantcast. Tumblr’s tens of millions of registered users create 120,000 new blogs every day, for a total of 86 million and counting, which drive some 18 billion page views per month.”

Here is another compelling stat about Tumblr:

“The amount of time that visitors spend on Tumblr averages around 2.4 hours a month, making it only second to Facebook in terms of user engagement.”

For more facts and figures on Tumblr, see our infographic below.

Should education institutions use Tumblr?

Search Engine Journal points out: “[On good Tumblr sites] content is very visual, eye-catching and quick to consume. If your product can fit into that mold, then Tumblr should be your next social media marketing channel to spread content and bring attention to your brand.”

For more great tips on how to use Tumblr effectively, Social Media Examiner offers advice on using humour, showing off your brand’s personality, and giving users an inside peek into your company or institution.

Therefore, education institutions thinking about a Tumblr site should be guided by four considerations: