International education now worth €1 billion to the Irish economy

With international education in Ireland reaching a value of €1 billion, foreign student arrivals are proving their worth, providing much needed revenue into Ireland’s education sector and broader economy. ICEF Monitor shares the headlines from a new report outlining the recent rise and fall of different types of students across sectors, as well as various collaborations designed to offset austerity measures and reforms.

The value of international students

Of this pool, international student numbers in third-level colleges grew by 2% to 32,000 in the academic year 2011/12, according to the latest figures from Education in Ireland, a brand managed by Enterprise Ireland with support from the Department of Education & Skills.

International education is now worth €1 billion to the Irish economy, with foreign students in higher education contributing around €700 million and English language students around €300 million. The graph below shows a further breakdown of those attending third-level colleges.

The value of Ireland’s education sector is particularly noteworthy given the austerity measures introduced in 2008 and budget cuts anticipated to peak at 29% by 2015. On top of that, higher education is dealing with a sharp rise in domestic enrolments – commonly attributed to demographic factors and the downturn in the employment market.

Despite these challenges, as previously reported by ICEF Monitor, experts say the “higher education system has done an admirable job thus far at absorbing the cuts without sacrificing quality.”

Mr John Twohig, managing partner at the Ahain Group, a marketing and research consultancy based in Ireland, has one answer to how institutions in Ireland can weather the storm:

“The fact is that the institutions are suffering large cuts in their budgets from government, so increasing international student recruitment would bring much needed revenues to assist in protecting the quality of education given by our institutions.”

Ireland’s stated goal is to raise the number of international students by 2015 to 52,000 and English language students from 100,000 to 125,000 – a boost for the education industry as well as the economy as a whole.

“It is estimated that every 100 additional international students who come to Ireland support the creation of 15 local jobs, through spending on tuition, accommodation and other living expenses.” 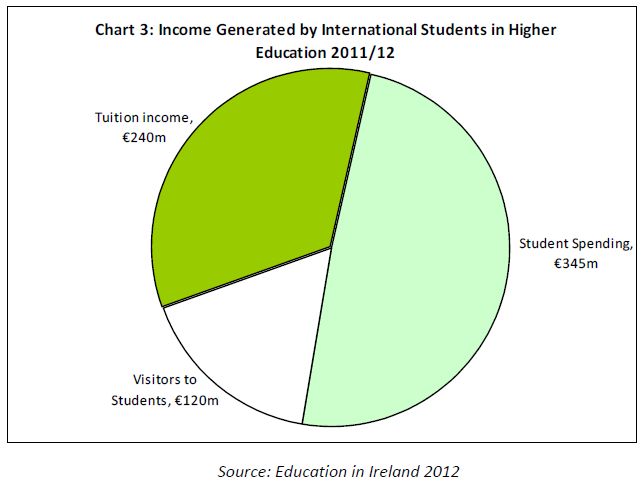 The spread of international students 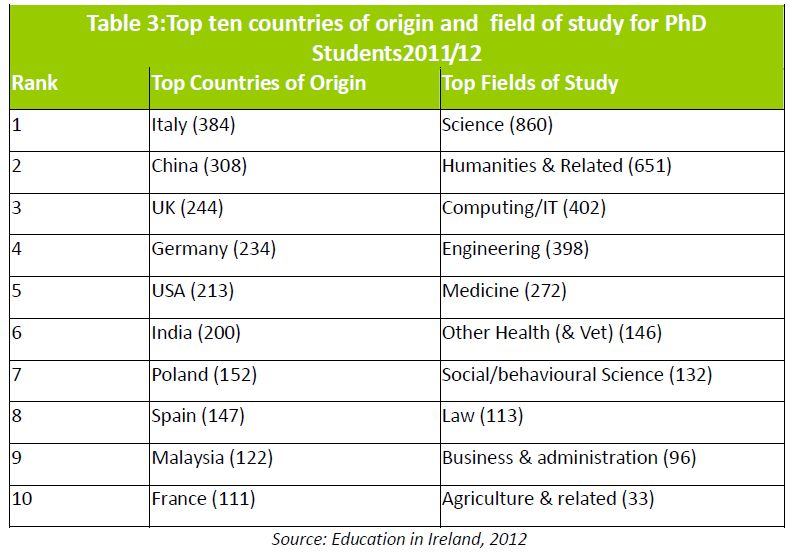 A snapshot of international student activity from 2010-2012

The best performing priority market has been Malaysia, which saw a 10% growth in student numbers.

While growth in other priority markets has been more modest, a renewed focus on India, China, the US, Brazil, and some of the Gulf States should see stronger growth in these markets in 2013 and beyond.

Transnational education (TNE) is becoming increasingly important to the global expansion in international education – and therefore to the future prospects of Ireland in this sphere. The rate at which Irish higher education institutions are rising to this challenge is mixed, but already the data indicates that 23% of Ireland’s international students are offshore and this had led to a shift in the profiles of some countries of origin. For example, 46% of Chinese students are now studying offshore and the numbers based in Ireland have dropped by 10% (300) in one year. 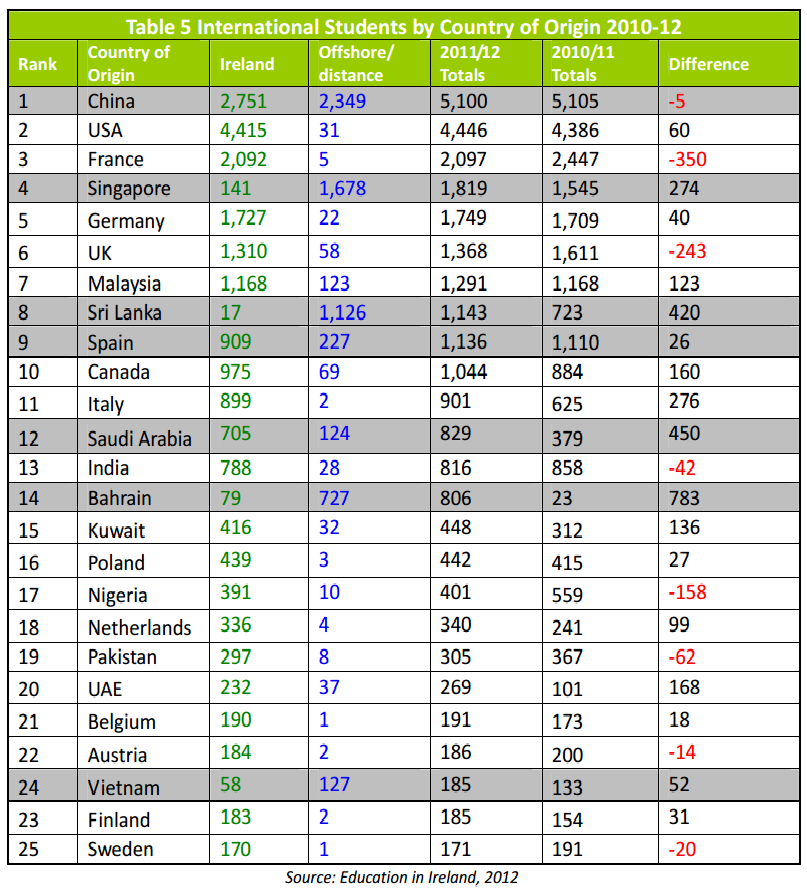 “The international education sector in Ireland is faced with a number of impediments to progress: limited resources; inadequate staffing; systems which are unfit for purpose; uneven academic buy-in and potential capacity issues.”

Revenues earned from international students might be one way to bolster the sector, but other additional sources for higher education funding must be tapped.

Philanthropic and commercial sources have delivered lukewarm results to date; other options include a higher contribution from families who can afford to pay, allowing institutions to set a higher market-based fee, or expanding the role of private providers.

Part of the struggle is that the current €2,250 student contribution is well below the actual cost of funding a year’s college education, which averages €7,000. Re-introducing fees could see the price rise to €5000 – €6,000 a year; however, Education Minister Ruairi Quinn ruled out any increases in student fees up to 2015.

“I am absolutely saying that the level of investment in the medium to long term won’t be sufficient to meet demand for higher education. We cannot continue with policy where we are decreasing funding and increasing participation.”

In this climate, we are likely to see mergers (particularly for institutes of technology, given their decline) and collaborations, either on the basis of specialism or regions.

The 3U Partnership (between Dublin City University, NUI Maynooth, and Royal College of Surgeons Ireland) formed last June is a prime example. The collaboration focuses on enhancing the student experience, creating a new marketing brand for international student recruitment and producing better research outcomes (e.g. the 3U Biomedical Research institute leverages a combined pool of over 750 researchers).

Research collaboration is also paving the way for stronger ties with India, Brazil, Russia and the US – some of Ireland’s target markets.

Ireland is committed to Brazil as a strategic partner with access to the country’s Science without Borders programme. As announced in October, 4,000 Brazilian undergrads will travel to Ireland over the next four years.

And Ireland hopes to claim a larger share of the 150,000 Indian students who study abroad. Late in 2012, Minister Cannon led a group of 60 executives, many from 16 HE institutions, on a well received mission to India, visiting Bangalore, Delhi & Mumbai. A number of India-specific scholarships were announced during the tour.

Specific areas of collaboration between Ireland and India include:

Whereas links between Ireland and Russia are strong in:

Meanwhile, with regards to China, Limerick Institute of Technology (LIT) has signed an agreement with Yangtze University for 120 Chinese students a year to take their studies in Limerick from 2013. The first group of students will study civil engineering and construction management, with further programmes in other disciplines being explored.

And last year, a delegation of 22 academics from China visited Dublin for a three-day, fact-finding trip, aimed at creating links between Chinese and Irish educational institutions.

The new working holiday programme between Taiwan and Ireland commenced on 1 January, 2013, allowing an annual quota of 400 visas for young adults from each country for stays of up to one year for tourism, work or privately funded studies.

Finally, Ireland continues to strengthen study abroad agreements with the US.

In September, the ten-member Pittsburgh Council on Higher Education and the 13-member Institutes of Technology Ireland entered into an agreement to strengthen, promote and develop co-operation in education, training, research, and innovation among the member institutions.

Also in September, the Institutes of Technology Ireland signed an agreement with Wisconsin Technical College System for students to study in Ireland from 2014. The Memorandum of Understanding (MOU) will bring a high-level delegation to Ireland next summer from 16 Wisconsin Technical Colleges to familiarise themselves with the opportunities for student placement there.