The link between student pathways and enrolment forecasts in Australia

Recent research on the study paths followed by international students in Australia is helping to provide fresh insights into future enrolment trends for the country’s international education sector.

Against a backdrop of significant enrolment declines over the past three years, Australia Education International recently released new data on international student pathways across the Australian education system.

The AEI study shows that three out of five international students commencing higher education studies in Australia in 2011 first began their studies in an Australian English-language programme, vocational or technical college, or other school.

The country’s English-language, or ELICOS, sector is a particularly important barometer for pathway enrolment. Roughly 35% of students completing ELICOS studies in 2010 went on to higher education studies in Australia and a further 20% progressed to vocational or technical (VET) training.

Beyond this broad pattern, the ELICOS sector plays a critical role in serving students from key recruitment markets for Australia, such as China and Saudi Arabia, for which a majority of students (72% and 53% respectively in 2010) begin their studies in an ELICOS programme before moving on to higher education. 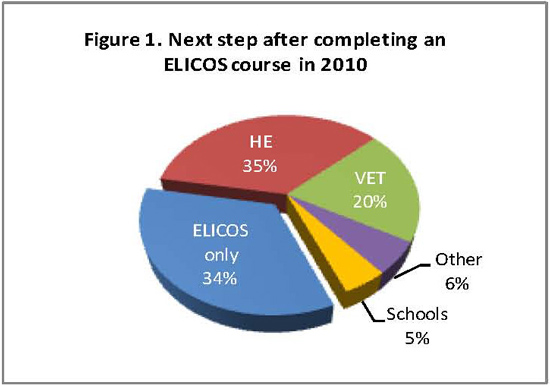 The immediate next step for students completing ELICOS studies in Australia in 2010.
Source: Australia Education International

Given that ELICOS enrolments have declined by as much as 17% over the past three years, these recent observations with respect to study pathways are now fueling speculation about a possible decline in higher education enrolment in the years to come. Perhaps because of their capacity to draw pathway students from other sectors, Australia’s higher education institutions have been somewhat buffered from the enrolment declines of recent years. However, there is some indication that the effects of slowing enrolment are now being felt in the nation’s universities as well.

Additional Australia Education International data indicates that overall international enrolment in Australia declined 8.5% for the year to May 2012 relative to the same period in 2011. The higher education sector recorded its sharpest decline since 2009 over this same period, with a 4.6% decline in enrolment overall and an 8.1% decrease in new registrations.

These immediate-term trends reflect the importance of the underlying pathway relationships in the Australian education system as well as some important shifts in those pathways in recent years. The Australian reports that as recently as 2008 roughly two-thirds of Australia’s international students enrolled in just one sector, whether higher education, ELICOS, VET, or another school programme.

As the more recent AEI data reveals, however, the relationships between the different sectors have become more integrated in the years since. As a result, the impact of enrolment gains or declines in one sector may now be felt more directly in other parts of the Australian system than has been the case in the past.