The number of international students at UK universities has risen by 35 percent over the past five years, and has more than doubled since 2000-01, according to new data from the Higher Education Statistics Agency (HESA).

Their latest report provides details of student enrolments and qualifications obtained by higher education students at higher education institutions in the UK for the academic year 2010/11. It also includes information from the HESA Aggregate Offshore Record. This record captures students studying wholly outside the UK who are either registered with the reporting institution or who are studying for an award of the reporting institution.

The total number of international students at UK universities now stands at over 298,000. Despite this, the proportion from outside the European Union compared with domestic and EU students has remained fairly constant, rising from 10 percent to 12 percent in five years.

The largest group of overseas students comes from China, which has accounted for about a fifth of total numbers since 2006-07.

There has been growth in the numbers from India, up from 10 percent of total numbers in 2006-07 to 14 percent in 2009-10. Saudi Arabian and Nigerian student numbers have also risen significantly.

The graph below, provided by a recent Times Higher Education post, plots the upward trend in full-time undergraduate non-EU student numbers in the UK over the past five years. As the numbers have increased, so has the average fee: the University of Oxford charged the most between 2006 and 2007, with Imperial College London taking over in subsequent years. 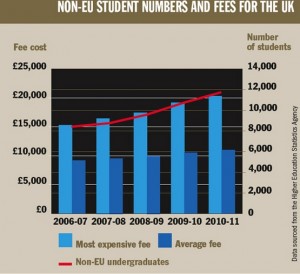 One thought on “Overseas student numbers, fees rise in the UK”