US report puts the price of declining student market share at US$5.5 billion

More specifically, NAFSA is pointing to two consecutive years of declines in foreign student commencements, as tracked in the annual Open Doors research from the Institute of International Education (IIE). IIE has reported that new international student enrolments fell off 3% in 2016/17 and then another 6.6% in 2017/18.

We noted in a separate report that the latest data from the US Department of Homeland Security’s Student and Exchange Visitor Information System (SEVIS) shows a 3% decline in the total number of foreign students with active US study visas as of March 2019 compared to the same point a year earlier.

It should be said that the US remains far and away the world’s leading study destination in spite of that downward trend over the last two years. With roughly 1.2 million foreign students enrolled currently, it maintains a considerable lead over Australia, which has now effectively surged into second place on the strength of its nearly 700,000-strong international student cohort.

But the NAFSA report, Losing Talent: An Economic and National Security Risk America Can’t Ignore, makes the case that a number of other study destinations – including Australia but also Canada and China – are building their international student populations much more quickly. The net effect is the the US is continuing to lose share in the international student market.

NAFSA estimates that the US share of the global student market has dropped from 28% in 2001 to 22% in 2018. A related ICEF Monitor analysis echoes this point and highlights the more diverse field of study destinations that are gaining share in recent years. 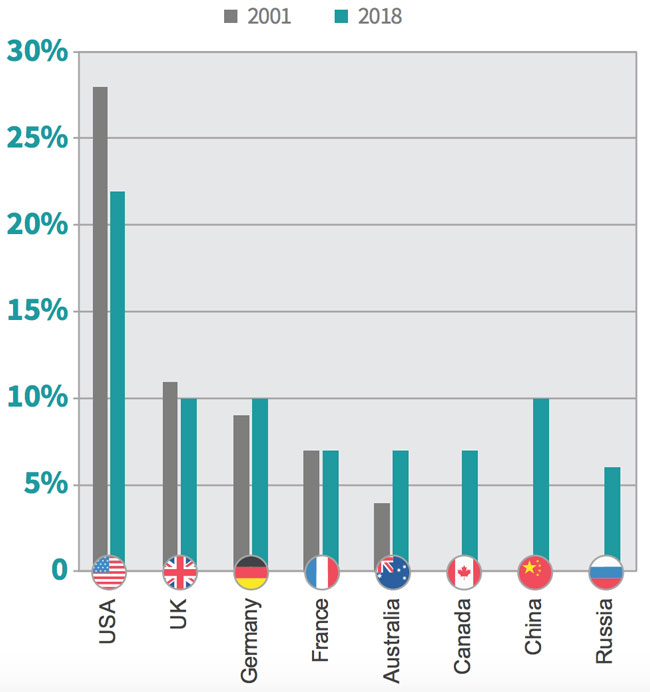 Measured in the billions

Indeed, given the very significant value of US education exports – the sector has been estimated to have generated US$39 billion in economic impact and supported 455,000 US jobs as of 2017/18 – every lost point of market share carries a steep cost.

“After more than a decade of enrolment growth, the United States’ two years of declining new international student enrolment for the first time since 2003, is of grave concern to foreign policy experts and economists alike,” said Esther D. Brimmer, NAFSA’s executive director and CEO. “This downward trend must stop in order for the United States to remain competitive in today’s global market.”

Also highlighted in the report are annual surveys of US institutions that provide an important window on the factors that are contributing to the current downward trend in the US. As the following chart reflects, visa concerns have topped the list in each of the last three years – a factor that underscores the importance of the Chinese government’s recent caution to prospective students regarding study in the US. 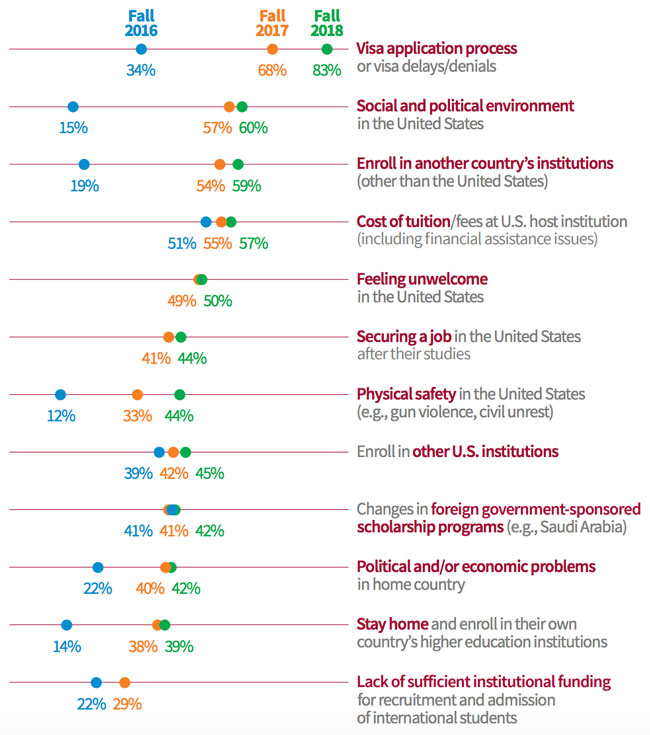 The top 12 reasons for declining international student enrolment in the US. Source: NAFSA

The report adds that, “A significant proportion of institutions report that the US social and political environment (60%) and feeling unwelcome in the United States (48.9%) are factors contributing to new international student declines. Colleges and universities also cite a significant increase (11%) in concerns about physical safety in the United States, including gun violence and civil unrest (43.6%).”

Aside from any such factors that bear on the attractiveness of the US for international students, NAFSA also notes the relatively rapid growth of foreign enrolments in a number of other destinations. The report highlights in particular the post-study work opportunities available to international students in countries such as Australia, Canada, and China.

“We are losing our market share of international students and scholars,” concludes the report, “while many other countries are proactively introducing national policies and marketing strategies in order to attract these talented individuals.”

The report closes with a call for policy action in the US, including the development of a national strategy for international student recruitment and improved access to post-study work opportunities for visiting students.

This entry was posted in Most Popular, North America, Regions, United States.