After a few years of steady increases in student numbers, enrolment growth in Ireland’s ELT (English Language Training) sector cooled off last year. There were 121,462 students enrolled in Irish ELT programmes in 2018, down nearly 5% from the year before. Total student weeks, however, reached 806,503 – representing both a new record high and year-over-year growth of more than 5%.

These are among the key findings from the English Language Training 2018 Student Profile report released in April 2019 by Marketing English in Ireland (MEI), the country’s peak ELT body. The report reflects survey responses or other enrolment data from all 67 schools that made up the MEI membership last year.

The following tables provide more detail – and year-to-year comparisons – for both student numbers and student weeks. 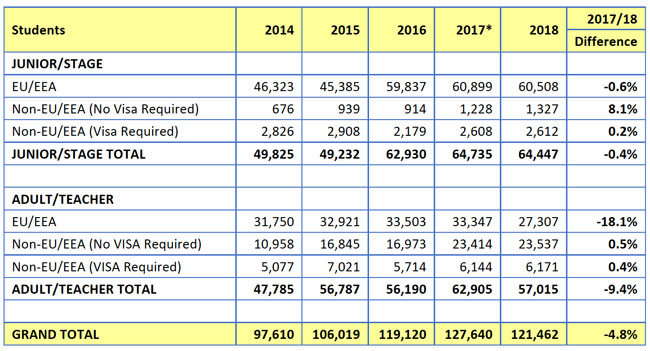 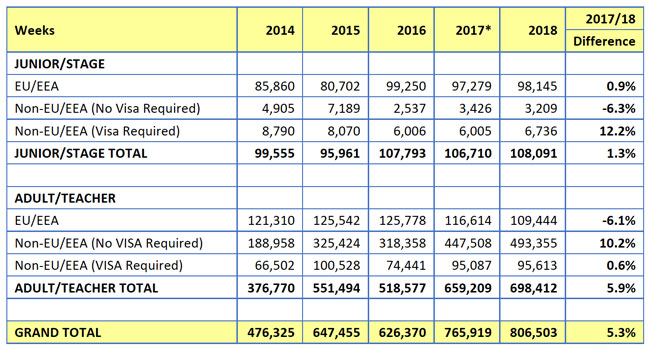 As the tables highlight, junior numbers (including stage programmes for closed groups) held fairly steady in 2018, but the number of adult learners, especially those from within the EU, were down more sharply.

Overall, nearly three in four students came from EU (and/or European Economic Area) countries. Another 20% arrived from non-EU countries – such as Brazil and Japan – where students do not require visas to pursue their studies in Ireland. The remaining 7% came from non-EU countries where students are required to obtain a visa for studies in Ireland, such as Russia, Saudi Arabia, and China.

“There are a few reasons why EU/EEA student numbers to MEI schools decreased in 2018,” says MEI CEO David O’Grady. “Italy sent fewer PON students in 2018, and many EU/EEA countries have upgraded and fine-tuned their English language teaching so that fewer students need to travel abroad for General ELT purposes.”

In spite of those softer EU numbers in 2018, total student weeks for the sector were buoyed by strong growth from non-EU markets. This was especially the case for markets, such as Brazil, Mexico, and Japan, where students do not need a visa to study in Ireland. 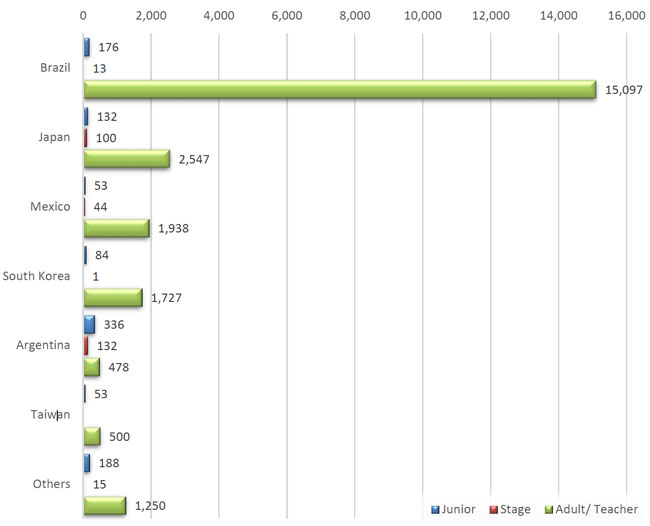 As the chart indicates, roughly six in ten students from non-EU markets without a visa requirement were from Brazil. Those students – as do those from many of the non-EU sending markets – tend to book for longer study periods and this is what has driven the total student weeks reported by MEI members to new record levels in 2018.

“A significant number of the long-term students in MEI schools in 2018 were Brazilian,” concurs Mr O’Grady. “Those students keep waiting for the economic and employment situation in Brazil to improve and so decide to study longer and to avail of the concession to part-time work that is available in Ireland.”

This entry was posted in Europe, Ireland, Language Learning, Regions.