Egypt is the most populous country in the Arab world. The population more than tripled – from 32 to 98 million – between the mid-1960s and 2017, and slightly more than half of Egyptians are under the age of 25.

Add to this that the substantial economic reforms currently underway in Egypt are now helping to stabilise the economy. Economic growth surpassed 5% in 2018, and inflation, while still high, has cooled considerably over the last two years.

This improved performance has been driven by public investments, expanding consumer consumption, and rising export values. Supported (even required in some cases) by major international funders such as the World Bank, Egypt is also making targeted investments in health and education to help alleviate poverty and promote social development.

These macro social and economic trends have combined to set the stage for expanded participation at all levels of education.

Egypt relies on a highly subsidised public education system, which, as of the constitutional reforms of 2014, is compulsory for Egyptian students until the end of secondary school. Roughly 90% of Egypt’s K-12 students, and 94% of higher education participants, are educated at public institutions and schools.

As of 2018, there were nearly 21 million students enrolled in K-12 schools, and another 2.4 million in higher education. The following illustration provides an overview of the system, with key oversight bodies noted as well. 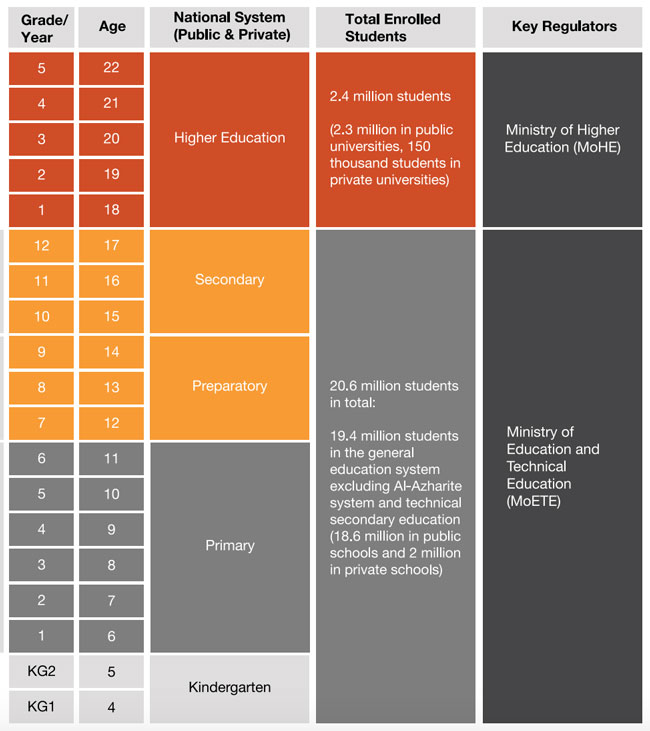 An overview of the Egyptian education system, 2018. Source: PwC

Factoring out enrolment in religious education and technical secondary education, there were 19.4 million students enrolled in Egypt’s general K-12 system. A recent report from PwC highlights that enrolment in this system grew by 32% over the last decade (compound annual growth rate of 2.8%).

This growth trend is poised to continue in the decade ahead. The UN forecasts that population growth in the country will accelerate through 2025. That increase, along with a culture that places a high value on education and a more stable economy, has also led to projections for growing school enrolments and increasing demand for higher education in the years to come.

Higher education numbers are following a similar trend. The population of college-aged students in Egypt is growing, and so too is the higher education participation rate. The following chart tracks both of these metrics between 2012/13 and 2016/17 with projections through 2021/22 as well.

Egypt’s public universities are among the largest in the region, and Egyptian students study in these institutions free of charge. PwC points out that the system is under pressure to keep up with the growing demand for higher education, and that this is likely to open the door to increasing participation by private providers in the future.

The government has also taken steps to welcome in foreign providers. New legislation governing the establish of international branch campuses came into effect in August 2018. As PwC notes, “The law aims at facilitating the procedures and streamlining the licensing requirement for establishing a branch of a foreign university. Under this law a foreign university can establish its own branch, agree with an education institute in Egypt to host the branch or enter into a form of partnership with an Egyptian university to grant a joint degree.”

Along with a looming supply-demand gap, Egypt is facing high levels of youth unemployment, including for university graduates. The average unemployment rate in Egypt was 12% in 2017, but this rate spiked up to 33% for the country’s youth in that same year. Also in 2017, 34% of all unemployed Egyptians held either undergraduate or graduate degrees.

Barring a dramatic expansion of higher education in Egypt in the very near future, we can anticipate that many of these factors – limited university spaces at home, growing population, strengthening economy, and poor employment outcomes for local graduates – will also lead to a growing demand for study abroad among Egyptian students.

Those numbers give us an important indicator of how Egyptian enrolment is trending and how it is distributed across destinations. Some of the destination numbers, however, appear to be understated. If we supplement the UNESCO values with destination-supplied data, it appears that the actual number of Egyptian students abroad is higher still, likely on the order of 35,000 (or more) students abroad in 2017/18. This places Egypt among the top sending markets in the Arab World, after Saudi Arabia, Morocco, and Syria.

Reflecting strong academic, immigration, and commercial ties within the region, roughly a third of Egypt’s outbound students choose to study in Saudi Arabia or the UAE.

The US remains the third most-popular destination and hosted just under 3,600 Egyptian students as of March 2019. While enrolment has been relatively flat in the US, Egyptian numbers have jumped upward in other destinations, notably in Canada, which hosted more than 2,500 Egyptian students in 2018 (an overall increase of 78% over the past five years).

Other top destinations include France, the UK, and Malaysia, each with roughly 2,000 Egyptian students in 2017/18. As a recent report from World Education News + Reviews points out, “Aside from the thriving educational exchange with both the UK and Malaysia, student flows to European countries are likely stimulated by access to scholarship funding. More than 1,000 Egyptian students have benefited from European Erasmus scholarships as of 2017, in addition to other funding opportunities.”

This entry was posted in Africa, Egypt, Higher Education, Regions.