Non-EU applications to UK universities up this year

The UK application registry UCAS has released new data from its 15 January admissions deadline for the 2019/20 academic year, and so we now have an early view of what enrolment trends may look like for the coming year. “On time” applications received by January 15 are viewed as an important indicator of current demand for British higher education, though students continue to apply after the deadline as well.

Applications to British universities for 2019/20 are up overall, and this marks the first overall increase in three years. More than 561,400 applications were received by UCAS, nearly 2,500 more than at the same time last year. 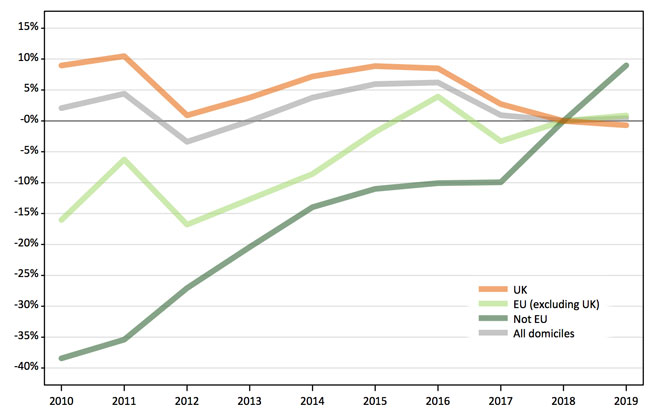 The healthy growth in non-EU applications and slight growth in EU applications was met with relief by university stakeholders in the UK. “In this time of uncertainty, it’s welcome news to see more EU and international students wanting to come and study in the UK,” said Claire Marchant, UCAS’s chief executive.

Still, the fact that Chinese applications account for so much of the increase is worrying to some who make the point that there needs to be more diversity within the international student population in the UK. Trend data illustrates the extent to which the population of Chinese in UK higher education has grown over the past decade. In 2010, there 4,450 Chinese applications registered, while for the 2019/20 year there were 15,880 plus another 5,100 from Hong Kong.

“It is a shame that we are so dependent on one country for our international students … as I would like to see similar growth from other territories too. But I welcome the growth and I also think it will provide the UK with some real soft power benefits in the future, when these people graduate and go back to China with experience here on their CV.”

Needless to say, the same concern could be raised of many leading study destinations, including the US, Australia, and Canada. But in one interesting indication of the significance of China in British higher education enrolments, UCAS observes that there were more applications from China and Hong Kong this year (20,980 combined) than there were from Wales (18,850) or Northern Ireland (17,910).

UCAS registered 453,840 applications from the UK this year, which represents a decrease of just under 1% compared to the applications received in January 2018.

While China is the big story in terms of the overall increase in applications volume this year, there were also notable gains from the following important sending markets:

There were also significant increases from countries sending smaller numbers of students to UK universities. While these are more modest numbers, the extent of the growth is notable given the push for greater diversification of the international student population in the UK.