Findings from the 12th annual ICEF i-graduate Agent Barometer were released this week at ICEF Berlin. The 2018 survey was administered over August and September this year, resulting in nearly 1,300 responses from agencies in 101 countries. This year’s respondents collectively referred more than 350,000 students for study abroad in the previous 12 months.

The vast majority of agents responding to the 2018 survey – between 74% and 84% for most programme categories –  said that they expect to place more students in the next 12 months than in the previous year.

Following on from some of the important destination trends identified in the 2017 Agent Barometer, this year’s survey also clearly indicates the continuing popularity of Canada as a study destination.

The following chart, for example, maps changes in the reported attractiveness of major English-speaking study destinations between the 2014 and 2018 surveys. 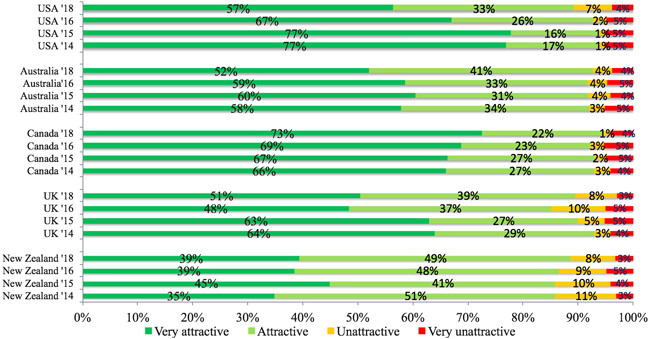 The additional chart below provides some further insights as to why reported student interest appears to have softened this year for two of these leading destinations. These responses suggest that the political context in the US continues to play an important role in shaping agent and student perceptions, whereas the modest decrease in the reported attractiveness of the UK is more a feature of changing currency exchange rates. 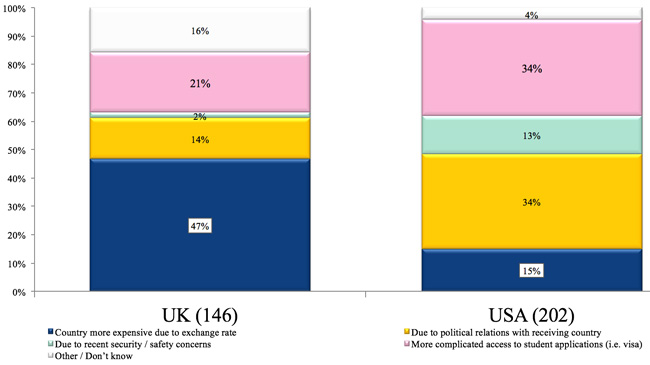 Reasons given for declining student interest in the US and UK, 2018. Source: i-graduate/ICEF

As in previous years, the 2018 survey also tracks reported student concerns, both prior to and after arrival. This year’s findings, as summarized in the chart below, once again highlight the importance of strong support services at the study destination in order to stay on top of and respond to concerns around programmes, services, or accommodation.

Also of note this year are some important shifts in the broader mobility concerns reported by agents. When asked about the most significant mobility concerns they encountered in 2017, most agents cited issues around student visas. But also notable this year are continued declines in areas of concern that were much more prominent even two or three years ago, including financial matters, economic conditions, and the global political situation.

The 2018 survey respondents report modest student interest in online programmes. Given the rapid expansion in online enrolment in many markets around the world, we should understand this to mean that a relatively small proportion of students are inquiring with agents about such programmes.

However, nearly two-thirds of agent-respondents this year indicate an interest in representing online programmes. And more than six in ten (62%) indicated a preference for blended or hybrid programmes that combined online instruction with a component of study abroad.

Finally, the 2018 Agent Barometer reveals that agents may have an important role to play in alumni engagement. More than seven in ten (72%) report that they follow up with the families of currently enrolled students. Three quarters (76%) say they also follow up with students at graduation.

Many of these further student and family contacts are oriented to ongoing study or career counselling, but they underscore the fact that agents may often have important alumni information (and access) that is not always available to institutions and schools.

While nearly nine in ten responding agents (86%) maintain an alumni database, less than a third (31%) say that their higher education partners collaborate with them in contacting alumni.

At the same time, agents expressed a strong interest in working with institutions and schools in strengthening alumni networks, whether by organising alumni events or working with educators to help improve their alumni databases.