Survey: International students highly satisfied with studies in Canada; many planning to stay

A recent survey conducted by the Canadian Bureau for International Education (CBIE) reveals that the vast majority of international students in Canada are satisfied with their decision to study in Canada and would recommend Canada as a study destination to friends. In addition, six in ten of them want to immigrate to Canada in the future.

Over 14,000 students responded to the 2018 CBIE International Student Survey, and these students were collectively enrolled at 46 institutions in the 10 provinces of Canada. The majority of the institutions were universities (31), with 12 colleges and three polytechnics also represented. CBIE notes that the response rate represents a “253% increase over [the last survey conducted in] 2015, making it by far the most robust data source on the post-secondary international student experience in Canada to date.”

Just over a third (35%) of students surveyed were studying at the bachelor’s level, while 22% were in master’s programmes, 17% were pursuing doctoral degrees, and 13% were taking diploma courses. The greatest proportion of students came from Asia (East Asia 23%, South Asia 22%), with the next largest group from Africa (14%). Students also came from Europe (12%), Latin America (11%), and the MENA region (10%), with smaller numbers from the US and Eastern Europe and Central Asia.

Top reasons for wanting to study in Canada

In 2018, these were the top three reasons that students chose to study in Canada:

More than 9 in 10 (93%) students were satisfied with their decision to study in Canada, with more than half of this proportion (55%) “very satisfied.” In keeping with their high levels of satisfaction, 96% said they would definitely (67%) or probably (29%) recommend Canada as a study destination.

Importantly, 95% of students said they are achieving success in meeting the demands of their academic programme, a finding that suggests that their programmes are the right fit for their interests and abilities. Fewer students are feeling comfortable with the social aspects of studying in Canada: 73% felt they are encountering success in becoming involved in campus activities.

Just three years ago, half of international students in Canada wanted to gain permanent residency in Canada at some point in the future. That proportion has since jumped to six in ten.

The swell of interest in permanent residency is occurring amid a welcoming policy environment for
international students wanting to immigrate to Canada. In 2016, while explaining new legislation that makes it easier for international students to apply under Canada’s Express Entry immigration system, then-Minister of Immigration John McCallum noted,

“When I think of the best group in the world that would make the best future Canadians, the group that comes first to my mind is international students.”

Nearly half of respondents (43%) were employed – that is, working during their studies – at the time they completed the CBIE survey. Among those not employed during their studies, 56% said they were having difficulty finding paid employment. When asked about the barriers to finding work, those students said their main challenges were not having enough work experience (52%), not being able to find appropriate jobs to apply to (37%), and simply not having time to work during their studies (33%).

The report notes as well that, “Many students offered their perspectives about different and often compounding challenges with regard to working as an international student during their studies. Some of these challenges included a sense of employer discrimination against international work experience, cultural differences, eligibility to work in Canada and the challenge of investing scarce time and energy into networking.”

Safe housing, but some concerns about affordability

While virtually all (97%) international students surveyed felt safe in their housing, significant numbers had affordability concerns regarding accommodation. Roughly 8 in 10 (79%) were either “somewhat” (42%) or “very” (37%) concerned about their ability to pay for their accommodation, with concerns rising among students studying in Canada’s larger cities. In addition, close to half (48%) experienced problems securing accommodation prior to arriving in Canada.

“Housing is one of the largest costs an international student in Canada will incur,” notes the report. In many housing markets during the past few years both affordability and accessibility have decreased, calling for close monitoring of the situation by stakeholders across the international education sector.”

In 2017, 494,525 international students studied in Canada, a 20% increase over the previous year. The CBIE report shows that Canada’s main direct competitor is the US. Of the 29% of students who had applied to study in another country before choosing Canada, over half (54%) had applied to the US. Significantly fewer had applied to the UK (22%) and Australia (15%). Less than 1 in 6 applied to France (13%) and Germany (10%) before Canada, and only 4% had applied to China. 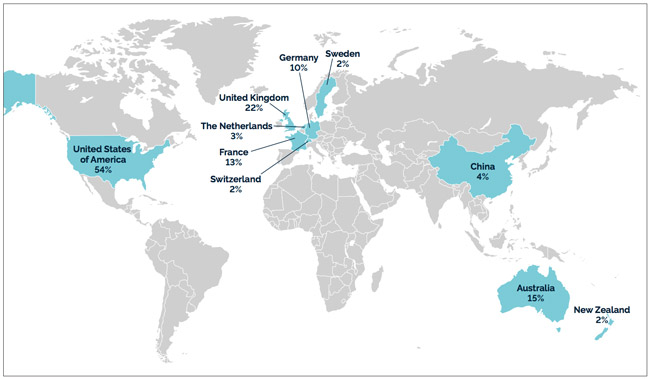 Other study destinations to which students had applied before choosing Canada. Source: CBIE