There were indications all along that Canadian recruiters were in for a strong year in 2017. And now the latest figures from Immigration Refugees and Citizenship Canada (IRCC) confirm another year of very strong growth.

As of 31 December 2017, there were 494,525 international students enrolled in Canadian institutions and schools. This represents an increase of 20% over the year before, and officially marks that the country has reached its long-term target – to host 450,000 foreign students by 2022 – a full five years ahead of schedule.

“This clearly demonstrates the continuing attractiveness of Canada as a study destination,” said Canadian Bureau for International Education (CBIE) President Karen McBride. “Our research shows that international students choose Canada because of the quality of the Canadian education system and our reputation as a safe and tolerant country. This reputation is especially attractive now, given a changing global climate.”

As the following graphic reflects, China and India remain the most important drivers of Canada’s continuing growth. 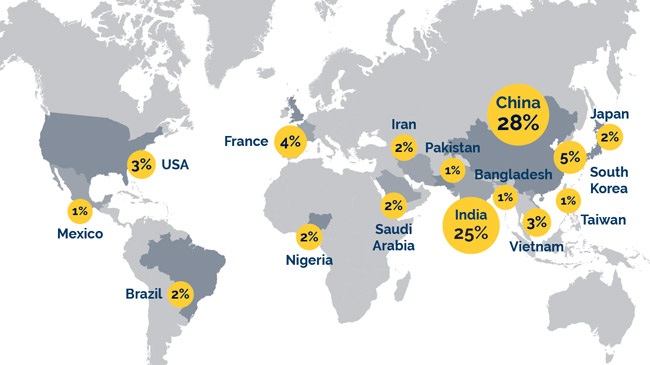 Vietnam continues to show strong growth as well, with nearly 15,000 students in the country in 2017, which represents a near-tripling of enrolment over the three years from 2015.

There are other notable growth areas as well, including Iran and Bangladesh. While promising for the future, many of these are on relatively small base enrolments from 2015 and 2016. 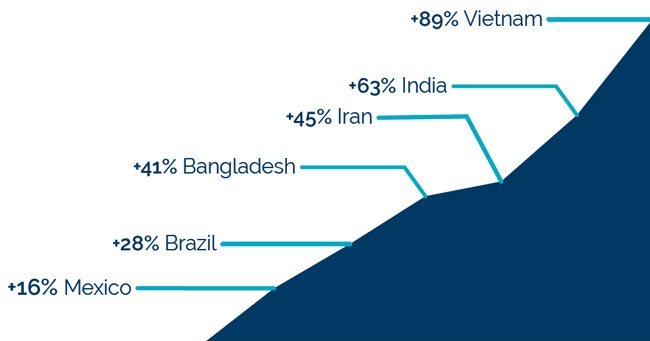 CBIE’s highlights the growth in higher education enrolments in particular, noting that, “The total number of post-secondary students in Canada is 370,975, a 20% jump over 31 December 2016. Canada now holds the fourth highest spot as receiver of post-secondary international students after the US, UK, and China, surpassing Australia and France.”

Meanwhile, an updated economic impact estimate from Global Affairs Canada (GAC) lags behind the 2017 numbers by a year. Working off 2016 enrolment levels, GAC estimates that international students spent CDN$15.5 billion (US$12 billion) on tuition, accommodation, and discretionary spending in 2016, as compared to an estimated CDN$12.8 billion (US$10 billion) in overall spending the year before.

This more or less tracks with the 17.5% increase in international enrolment in Canada over those two years. A simple extension of the 2016 estimate would suggest that the direct economic impact of international students in Canada was likely in the area of CDN$18.5 billion (US$14.2 billion) in 2017. This point is reinforced by the GAC study, which notes that, “A 10% increase or decrease in spending by international students results in an approximately 10-11% change in economic impacts.”

This level of spending supported nearly 170,000 jobs across the country in 2016, and total spending by international students is now equivalent to nearly 15% of all of Canada’s service exports.

This means in turn that education is now the fourth largest export sector in the Canadian economy, after only auto manufacturing, oil, and gold mining. “Canada is known for its exports from resource sectors like oil, natural gas, logging and forestry,” notes the report. “Few people realise that international student spending also makes a substantial contribution. In 2016, the total amount of international student spending surpassed the value of Canada’s exports in lumber, liquefied petroleum or hydrocarbon gases, [aerospace], and wheat.”