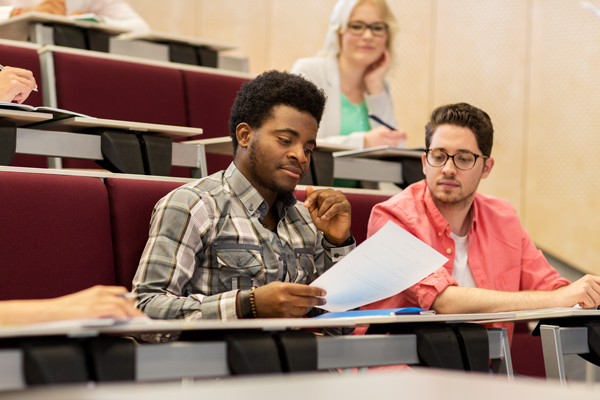 Conducted annually since 2005, the i-graduate International Student Barometer (ISB) survey has collected feedback from three million students worldwide across all student types, levels and years of study. In 2017, over 110,000 students globally responded to the survey, providing information about how they decided to study at their institution, their application and arrival experiences, support services, and their experience of living and learning overseas.

Students taking the ISB survey are asked about the factors they considered when making their decision to study overseas, from personal safety and cost of study to institution reputation and earning potential of the degree. Results can be compared globally and across multiple study destinations such as the US, Canada, UK, Australia, New Zealand, and the Netherlands.

The following table highlights that, when compared with the global benchmark, four decision-making elements stand out for a number of leading destinations.

Areas most commonly cited by 2017 ISB respondents as helpful to their decision making process. Source: i-graduate

Among the 7,500 international student respondents studying in the US, 84% indicated an institution scholarship was an important element in the process to decide where to study overseas, compared to 74% of international students globally. Respondents studying in the US appear more price sensitive (or at least more concerned about affordability) than those studying in other top destination countries – for example, 52% in the Netherlands, 77% in the UK, and 78% in New Zealand.

Institutions employing scholarship strategies to attract international students therefore need to ensure that prospective students can easily access relevant information about scholarship opportunities, for example by making the information prominent and easily accessible on institution websites. This is less important for Chinese students (80%) than Indian (90%), South Korean (88%) or Taiwanese (95%), so ensuring that information is used strategically is also important, such as via campaigns targeting students in particular countries.

Postgraduate students are asked about teacher reputation, with a much higher proportion of international students in the US reporting this as a significant factor than those studying in other countries. Hero profiles of teaching staff and research supervisors are therefore likely to be influential during the decision-making phase and should be prominent in promotional activity.

It is also notable that a high percentage of respondents studying in the US reported being influenced by the opportunity to work while studying, as well as opportunities for further study – 76% and 84%, respectively. However, this may be a common theme across some other popular destination countries for international students. In Canada, for example, 81% of international student respondents and 85% in Australia were influenced by opportunities to work while studying, indicating that a country’s national policies can often play an important role in study destination choice.

In addition to decision-making factors, ISB survey respondents are also asked about what influenced their choice of study destination – with factors ranging from alumni, friends, and family to staff of the institution and social networking sites. Again, results for international students in the US can be compared with results from international students studying in other countries. Four influencing factors stand out, two which work well for the US and two which lag performance in other countries.

For international students in the US, rankings are a critical factor in their choice of study destination, and particularly so for students from eight key source countries. Respondents from India, South Korea, Malaysia, Taiwan, Iran, Saudi Arabia, Vietnam, and Canada indicated that rankings were the number one factor that helped them choose their study destination. In total, 41% of respondents studying in the US reported being influenced by rankings – compare this, for example, to 33% studying in Canada, 25% in the Netherlands, 17% in Australia or 11% in the UK.

The focus on rankings is good news for institutions large enough or well-resourced enough to jostle for position among the various international ranking systems. If a university has a ranking it can boast about, it needs to be prominent in the marketing mix. Many colleges, however, do not have the benefit of an internationally recognised ranking, due to factors such as their size, mission, or niche focus. They will have to think of innovative ways to cover this gap in messaging to prospective students.

Word of mouth is also an important factor helping students decide where to study – 21% in the US versus 14% in the UK, Australia, and New Zealand and 17% globally. Knowing that current students can play such an important role as brand ambassadors highlights the significance of ensuring that they are highly satisfied with their experience.

Compared to the global benchmark and many other countries, international students in the US are not as influenced by recruitment agents and institutional websites. Only 25% of respondents studying in the US reported using agents, as opposed to 56% in Australia, 36% in the UK, and 30% globally. This likely reflects the relatively lower levels of engagement with agents on the part of US institutions. However, in a global and highly competitive market this represents a missed opportunity for US-based recruiters, which should consider ways to activate the agent channel.

Agents were the most important factor that helped Chinese respondents to the ISB decide where to study (39%), whereas only 27% of Chinese respondents listed institutional website as a factor, below the US (34%) and global (40%) averages. 90% of Chinese students in the US were satisfied or very satisfied with the services provided by their student recruitment agents, so they are a trusted and important channel that needs to be proactively managed. Similarly, management of website positioning, functionality, and content are critical to ensure this important channel optimises conversion opportunities for any prospective student visitor to a college’s site.