Some notable shifts in sending markets for Malta’s ELT providers

A new report highlights some important shifts in source markets for Malta’s English Language Teaching (ELT) centres during a year of significant growth in 2017. As we reported earlier, ELT schools in Malta hosted more than 87,000 foreign students during the year, representing 14% year-over-year growth in enrolment and a nearly 7% increase in student weeks.

It notes in particular the changing composition of Malta’s ELT student population. More specifically: the number of student weeks booked by students from outside the European Union increased by nearly 14% (and so at a pace considerably above the overall growth for the year). On the strength of that growth, non-EU students accounted for just under half (48%) of all student weeks for 2017. In contrast, the number of weeks booked by EU students increased only marginally (+.9%), and that due mainly to strong growth in the Italian market which effectively offset declines in a number of key European markets.

As the following chart reflects, Brazil, Turkey, Colombia, Japan, Russia, and South Korea were among the top non-EU senders. Reflecting the continued recovery of its outbound market overall, Brazil was in fact the fastest-growing sending market for Malta in 2017 (+7,548 weeks year-over-year). Deloitte highlights another important point, which is also illustrated in the chart below: “Russia, which is amongst the top 10 non-EU source markets, is back in positive territory after registering declining trends in the previous two years.” 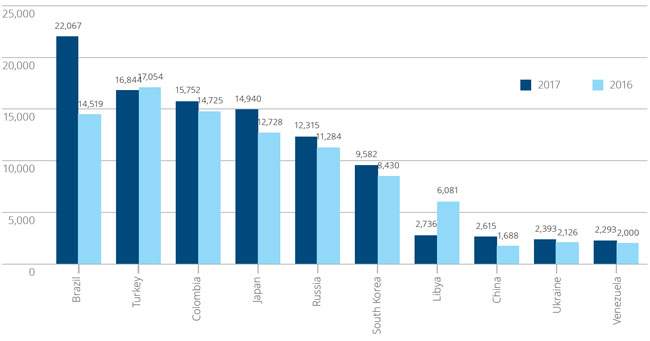 Among EU markets, only Italy – with an increase of just over 6,000 student weeks year-over-year – came close to keeping pace with Brazil’s growth last year. Other significant European markets, including France, Spain, and Germany, are found among the top declining markets for Maltese providers in 2017.

In an apparent nod to increasing competition for ELT students among study destinations, Deloitte reports that, “Tuition revenue per student week fell by 5.6% [in 2017], primarily as a result of increased discounting. Agency commissions also increased by 11% and are estimated to have reached 30% of total tuition revenue.”

The report also attributes this growth in commission payouts to “a growing shift towards tour operator bookings (84%) as opposed to direct bookings (16%).”

Total agency commissions paid by Malta’s ELT providers (in €000s), and commission as a percentage of tuition revenue, 2014–2017. Source: FELTOM

The survey analysis also finds a solid increase in operating profit levels from 2016 to 2017 (+28% increase in gross operating profit), owing to both increased student numbers and well-controlled costs. “Despite this improvement,” Deloitte concludes, “profitability levels are still below those registered in 2014.”