For years, Chinese students have been flocking to foreign universities to study – often staying on to work after graduating. As recently as 2013, the US-based National Science Foundation found that more than 9 in 10 Chinese students graduating with American PhDs remained in the US five years after finishing their programmes. “These so-called ‘sea turtles’ have long been prized by Chinese companies, both for the quality of their education as well as their experience of living abroad,” says a recent report from Forbes.

There are signs, however, that the labour market for returning students is changing, even as graduates of overseas institutions are now returning to China in greater numbers. 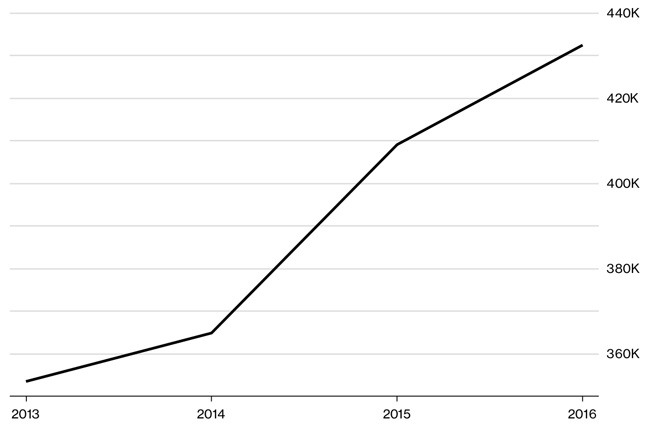 The growing Chinese economy is not surprisingly one of the factors tempting Chinese students to return home after graduating – particularly if their skills are a match for China’s hot tech industry, which grew by about 10% between 2015 and 2016 alone.

New opportunities in the tech sector in China contrast with an environment in which Chinese students with US degrees have faced limits to upward movement in careers in US tech companies. A recent study found that in five major US companies – Google HP, Intel, LinkedIn, and Yahoo – Asians and Asian-Americans represent 27% of employees overall but only 14% of those in executive positions.

Redressing this imbalance may well be a top priority for such companies as they face the growing reality that Chinese companies seek out American-schooled Chinese graduates to fuel their growth. Bloomberg notes that,

“US-trained Chinese-born talent is becoming a key force in driving Chinese companies’ global expansion and the country’s efforts to dominate next-generation technologies like artificial intelligence and machine learning. Where college graduates once coveted a prestigious overseas job and foreign citizenship, many today gravitate toward career opportunities at home, where venture capital is now plentiful and the government dangles financial incentives for cutting-edge research.”

Bloomberg notes that the technology sector is now the “biggest draw for overseas Chinese returnees, accounting for 15.5% of all who go home, according to a 2017 survey of 1,821 people conducted by the think tank Center for China & Globalization and jobs site Zhaopin.com.” This is up from just 10% in 2015.

Salaries in China’s tech sector are increasing in tandem with the sector’s expansion, with those for Artificial Intelligence professionals among the particularly impressive: team leaders in this sector with three to five years of experience can make more than 1.5 million Yuan (roughly US$237,000) annually.

Star power plays a part too

The increasing prestige of massive Chinese companies – such as Tencent Holdings, e-commerce giant Alibaba Group, media aggregator Toutiao, AI startup Cloudminds, and the search engine Baidu – is without doubt a major factor drawing Chinese talent home. What’s more, there are ever more cases of Chinese students taking their foreign degrees back to China and achieving tremendous success as entrepreneurs and innovators. For example:

Foreign degrees not always a ticket to success

Even as more Chinese students with foreign degrees are returning home, Chinese universities are climbing up world rankings, which may in turn be contributing to an apparent closing of the competitiveness gap between graduates of domestic and overseas institutions.

The online newspaper Sixth Tone recently stated that “foreign degrees have become so common among Chinese job applicants that they are no longer the deciding factor for landing a position.” The trend is prevalent enough that in 2017, reports Sixth Tone,

“… state news agency Xinhua coined a new term for students who have spent only a short period of time abroad and are unsure of their career paths: ‘bathing crabs,’ a reference to hairy crabs dunked for a few hours in eastern China’s famous Yangcheng Lake and then sold alongside the genuine lake-raised crabs, which attract the highest prices.”

In a recent Center for China and Globalization poll of close to 2,000 returning Chinese students, roughly 45% reported their monthly salaries were below 6,000 Yuan (US$922) – compared to the average monthly salary in Beijing of 9,942 Yuan. The survey also found high levels of discontent among returning students: close to 7 in 10 said that their pay was below what they had expected it to be.

Overall, the survey noted some consistent advantages and challenges for returning graduates:

With China’s hot economy and rapidly improved and expanded university sector has come a greater ability to attract foreign students. China’s goal is to host 500,000 foreign students by 2020, and that target will almost certainly be met: Chinese universities and schools hosted just over 440,000 students in 2016, an increase of nearly 12% over the year before. China is now the fourth-ranked international study destination, by international student population – after only the US, UK, and Australia.

“According to a January circular issued by Ministry of Human Resources and Social Security, Ministry of Foreign Affairs, and Ministry of Education, foreign students with a postgraduate degree or higher from Chinese or ‘well-known’ foreign universities can be offered employment within a year after graduation.”

The new policy was also accompanied by eased residence and entry policies for foreigners. China Daily further reports, “Last year, 1,576 foreigners obtained permanent residence in China, rising 163% over the previous year. Foreigners with permanent residence will enjoy the same rights as Chinese citizens in areas such as investment, housing purchases and schooling, among other rights.”

This entry was posted in Asia, China, Higher Education, Most Popular, Regions, Research.