Over the past ten years, the growth of first-time international enrolments in American graduate programmes has been remarkable, averaging 7.4% annual growth each year between 2006 and 2016. The scenario is similar when assessed from a five-year time window with an average annual increase of 7.8% between 2011 and 2016. This is why the most recent survey of graduate schools conducted jointly by the Council of Graduate Schools (CGS) and Graduate Record Examinations (GRE) Board on this measure is significant: it shows that enrolments among first-time international students in American graduate programmes fell by 0.9% between fall 2015 and fall 2016, which represents the first year-over-year decline since 2003.

As the following table illustrates, before this recent-year decline, growth in international graduate commencements had consistently – and significantly – outpaced the increase in new domestic students in US graduate programmes over the past decade. 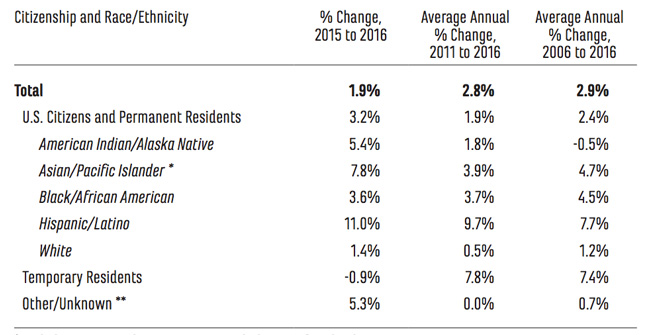 First-time enrolment in US graduate programmes by citizenship, 2006–2016. Source: CGS

For the moment at least, the steady growth in foreign enrolment in US graduate programmes has slowed. Even so, international students continue to represent a significant proportion of overall enrolments in these programmes, with roughly one in every five (21.2%) graduate students in the US an international student. Total foreign graduate enrolment grew by 2.4% from 2015 to 2016 compared to the five-year annual average of 6.0% from 2011 to 2016, and a ten-year annual average of 5.0%. The hypothesis offered by the Council of Graduate Schools last year now seems prescient:

What factors are influencing the trend?

While the large influx of international students into American graduate programmes could have been expected to slow over time, what remains unclear is which forces are contributing the most to the trend. Normal evolutions in the demand for certain types of education are one possibility (e.g., the rising attractiveness of certificates and micro degrees); another is the competitiveness of other countries. Canadian postgraduate programmes, for example, registered tremendous increases in international student applications this past spring, including up to a 152% increase from Indian students, and a nearly 200% increase for Iranian students.

The rising popularity of Canada among Iranian students may be related to the fact that Iranian nationals had been subject to the first travel ban introduced by the US government that applied to travellers from six Muslim-majority countries. This first iteration of the travel ban has now lapsed, but another will soon take its place. Iranians are still on the travel ban list, but with an interesting exemption for Iranian students, who will still be more rigorously vetted than students from other countries, but who are not banned like other Iranian nationals. Iran remains one of the top 25 source countries for foreign students in the US.

Separately, an Inside Higher Ed survey among officials from American universities revealed reports of “a slowdown in the flow of students from China and declines in graduate students from India, two countries that together account for nearly half of all international students in the US.”

However much the foreign policy climate in the US may or may not be influencing international student applications to American graduate programmes, Suzanne Ortega, the Council of Graduate Schools’ president makes a valid point, “For both statistical reasons, and for resource constraints, the really sizable increases in enrollment we’ve seen, let’s say, over the past four or five years, aren’t sustainable.”

Overall, the American institutions responding to the CGS/GRE survey enrolled more than 1.8 million graduate students in fall 2016. Despite declining international student first-time enrolments, overall student numbers are growing, but at a rate below the five-year average. Total graduate enrolments grew by 0.9% between fall 2015 and fall 2016, and first-time graduate enrolments increased by 1.9%. But overall growth in application volumes has slowed as well, as reflected in the following chart. 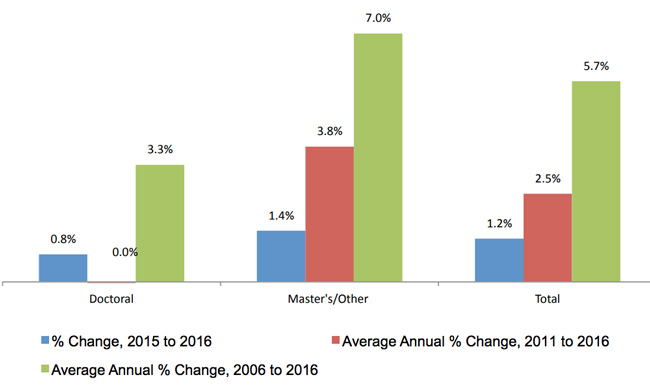