The latest annual survey of education agents in Brazil finds that the number of outbound students from the country increased in 2016. The Brazilian Educational and Language Travel Association (Belta) estimates that more than 247,000 Brazilian students went abroad in 2016.

This represents a 14% increase over the year before, whereas the two-year trend for Brazilian outbound shows net growth of 6.5% between 2014 and 2016. As the following chart reflects, this is well off the dramatic growth rate of the previous decade. However, it nevertheless reflects a return to growth after the notable “down” year of 2015. 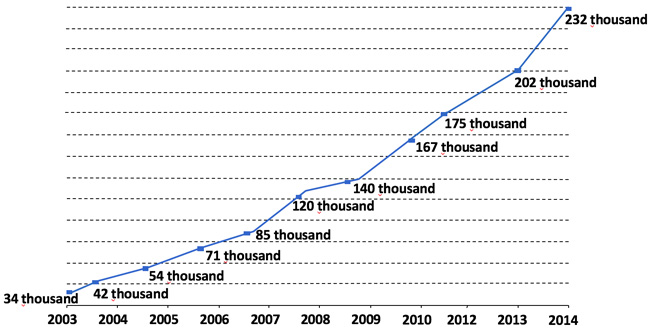 As in last year’s survey, Brazilian students demonstrated a strong interest in more affordable destinations as well as in courses linked to career opportunities or career advancement.

Belta began to observe last year that cost considerations have become more pressing due to Brazil’s challenging economic context, and that students are looking carefully at currency conversion rates as well as whether they will have the opportunity to work when considering where they will study. Driven in part by these considerations, Canada remained the preferred destination for Brazilians in 2016, followed by the US, Australia, Ireland, the UK, and New Zealand.

“I believe that this has happened because the work portion of these programmes can give a small help to pay for the investment,” says Belta President Maura de Araujo Leão. “Moreover, it will bring some work experience when the students will come back and will add a differential in their careers. Besides the language proficiency they also develop other skills that are very important for young professionals to find jobs. Countries like Ireland and Australia, as well as New Zealand, are very much looking into this market share, for they have visas that allow Brazilians to work for a certain number of hours, depending on the length and type of programme they will attend abroad.”

More broadly, Belta finds that students mainly study abroad in order to improve or learn another language. After language proficiency, the next major goal for Brazilian students is to invest in academic education. This is followed in turn by “making their resume stand out in the labour market,” “increasing employability,” and “promoting international experience focusing on career” – which together round out the top five motivating factors for Brazilian students.

Looking ahead to the remainder of 2017, Ms Leão says, “This year has started better than last year. However, we are facing again a serious political crisis…It affects the agencies somewhat.” “For the next two-three months, clients have already decided to go abroad. We have to wait to see how it will affect us from the next semester on. On the other hand, the young Brazilian adults are keen to get to study abroad to prepare themselves for better jobs when the economy picks up again. Parents are also looking for countries where to send their kids to study for longer periods, or going for higher education, as a way to give them a good future. 2017 is almost at its half, [and within] a very complicated time in the world, but we are still motivated to keep going.”

The survey results for 2016 are based on 106 respondents representing 618 agencies throughout Brazil. Of the respondents, 67 were Belta member and 39 were non-member agencies.