Foreign enrolment in Dutch universities doubled over past decade

Foreign enrolment in the Netherlands reached a record high in 2016/17. The country now hosts more than 112,000 international students, nearly three-quarters of which (81,392) are engaged in full degree studies. Another 11,500 are on Erasmus+ exchange, and nearly 20,000 more are comparable “credit mobile” exchange students from outside the European Union/European Economic Area.

That level of enrolment represents an almost-exact doubling of degree-seeking students at Dutch universities over the past decade. The Netherlands reached that mark due in part to its highest year-over-year growth in foreign student numbers in 2016/17 (+6,163 students or 8.2% growth from the year before).

Total enrolment of international degree-seeking students and their proportion of total higher education enrolment in the Netherlands, 2006-2016. Source: Nuffic

This latest data from the Netherlands comes via a recent report from Nuffic: Update: Incoming student mobility in Dutch higher education 2016-17. Nuffic attributes the country’s substantial gains over the past ten years to expanded national and institutional recruiting and the greater availability of English-taught programmes at Dutch universities, as well as the quality of life and job prospects for international graduates after their studies.

And with that growth through 2016/17, international students now account for more than one in ten (11.4%) of all higher education enrolments in the Netherlands. Nuffic points out that this is nearly double the OECD average of 6%, and estimates that the Netherlands’ share of all internationally mobile degree students worldwide increased from 1.5% to 2% over the past decade. 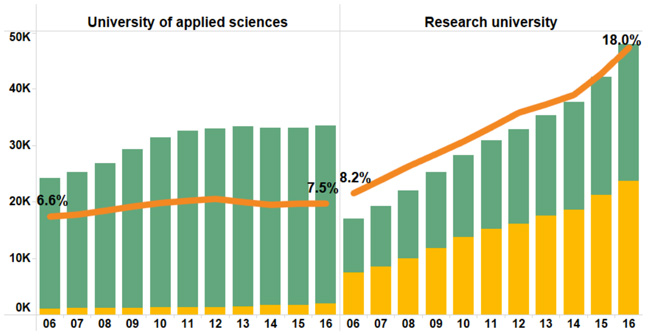 Following this broad institutional trend, there is some indication that foreign enrolment in the Netherlands is also becoming increasingly concentrated by level of study. In 2016/17, foreign students accounted for roughly 28% of all new entrants to Dutch master’s programmes. In contrast, only slightly more than one in ten (11.2%) of all new undergraduate students came from outside of the Netherlands.

At the programme level, therefore, the international-domestic mix has become more differentiated between the undergraduate and post-graduate levels. However, in terms of absolute numbers, overall demand is still weighted to undergraduate studies with 60% of new foreign students pursuing a bachelor degree in 2016/17.

In terms of field of study, Nuffic observes some variation in programme preferences between students from other European states as opposed to those from out the EU/EEA. In both cases, however, “economy and business” programmes are clearly the area of greatest demand.

International degree students in higher education in the Netherlands by field of study, 2016/17. Source: Nuffic

A more diverse enrolment base

Nuffic reports that foreign enrolment in Dutch universities has also become more diverse over the past decade. Germany remains, by far, the leading source country with more than 22,000 students in 2016/17. This represents about 27% of all foreign students in the Netherlands, but that level has actually declined from the 40% accounted for by German students in 2011/12.

Outside of the EU/EEA, Dutch universities have seen the greatest growth from markets in South and Southeast Asia, especially India and Indonesia. But even that growth has been outpaced by greater gains from markets in South and Eastern Europe, including Spain, Italy, Greece, and Italy. The report notes, “Overall, the record growth in the number of new enrolments in 2016/17 does not fundamentally alter the geographic distribution of the regions from which international degree students come to the Netherlands. Ever since 2006/07, a solid 75% of this population has come from within the EU/EEA region. Within this region, however, Eastern and Southern European countries are becoming increasingly important.”