Australia is the latest major English Language Teaching (ELT) destination to post its enrolment data for 2016. Full-year data is now available and it indicates a total of 115,279 commencements for the year for a gain of 3.6% over 2015. Enrolment rose slightly more, growing 4.3% to reach 151,110 students in total as compared to 144,932 the year before.

All told, new students commencing their studies made up 76% of all ELICOS enrolment during the year (English Language Intensive Courses for Overseas Students). And ELICOS students accounted for 21% of all foreign student enrolments in Australia last year, making the language sector the third-largest cohort after only higher education and vocational training programmes.

This marks the second consecutive year where annual growth in ELICOS enrolment has hovered around 4%. This growth continues to lag, however, behind overall growth rates for international enrolment in Australia, which have been in the double digits in recent years and have averaged closer to 7% over the past decade. Even so, notes English Australia, the 2016 results represent “the best sector full-year performance on record for commencements and enrolments, in front of 2009.” 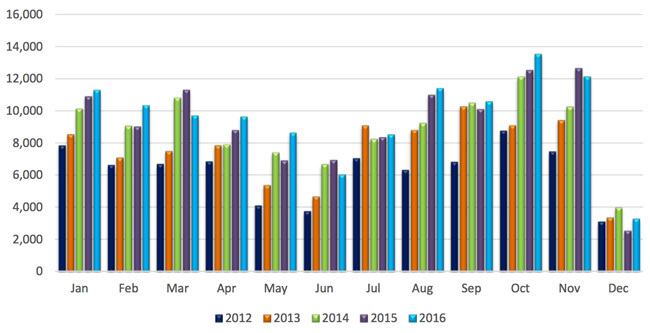 As in many major destinations, the top ten sending countries account for a large proportion of total ELT enrolment. Those top ten senders – China, Brazil, Colombia, Thailand, South Korea, Japan, Vietnam, India, Taiwan, and Spain – represented 76.5% of all ELICOS enrolment in Australia in 2016.

Also within the top ten were two notable falling markets: Vietnam, which declined by nearly 12% (the equivalent of about 650 commencements), and India, which was off by more than 25%, or roughly 1,500 new students.

Outside of the top ten, Saudi Arabia, the 14th-ranked sending market, and Pakistan, the 20th-ranked source, also registered notable declines, dropping 36.5% (about 1,150 students) and 38.2% (500 commencements) respectively. Taken together, the top 20 source markets accounted for just over 90% of all ELICOS commencements in 2016.

As is the case in most English-speaking study destinations, ELT enrolment remains an important indicator of overall enrolment, in no small part because English training is generally a stepping stone to further study for many students.

In the case of Australia, an earlier Department of Education study found that nearly two-thirds of all ELICOS students progress to further study. Given that, and given the large percentage of foreign student commencements represented by ELICOS in Australia, the slowing enrolment growth for language students could be a source of concern.

This might also be offset, however, by another segment – the non-award sector – which continues to demonstrate stronger growth, and which includes foundation programmes that prepare students for further study in higher education. As a recent English Australia summary notes, “The Non-Award sector, predominantly consisting of Foundation and Student Exchange Programs, has continued its trend of strong growth with the strongest proportional growth of all sectors – an increase of 20% or
5,784 more commencements nationally for 2016 compared with 2015. Having enjoyed steady growth for four years now, the sector is experiencing its best full year figures on record.”

For additional background on recent trends in Australia, please see:

This entry was posted in Australia, Australia/Oceania, Language Learning, Regions.