The latest ranking of study destinations scores 125 cities around the world according to the ranking of their higher education institutions, attractiveness to international students, affordability, and employer recruiting.

The QS Best Student Cities 2017 showcases some significant gains and drops across the ranking table, which in turn point to underlying demand factors such as affordability and shifting currency values.

Montreal tops the ranking this year, moving up six spots from 2016, and taking over from Paris, which was the top-ranked city destination for the last four years. Remarking on Montreal’s spot at the top of the ranking table, Concordia University President Alan Shepard said, “Canada’s education lure is no mystery. Our universities do well in international rankings. We have the lowest cost of living and highest quality of life among G7 countries.”

Indeed, that combination of affordability, quality of education, and student experience seem to have been the driving factors behind Canada’s strong performance in the 2017 ranking: four of the five Canadian cities included in the table moved up this year, and Ottawa took the top spot worldwide in the new “Student View” category. Student View is a new student survey factor in the QS ranking that measures students’ ratings of their city in eight categories: tolerance and inclusion, diversity, friendliness, ease of getting around, affordability, nightlife, employment opportunities, and arts and culture.

Paris moves down to the second position this year, and is followed by London which moves up two places for 2017. Overall, six of the eight UK cities in the table rose in the rankings this year. 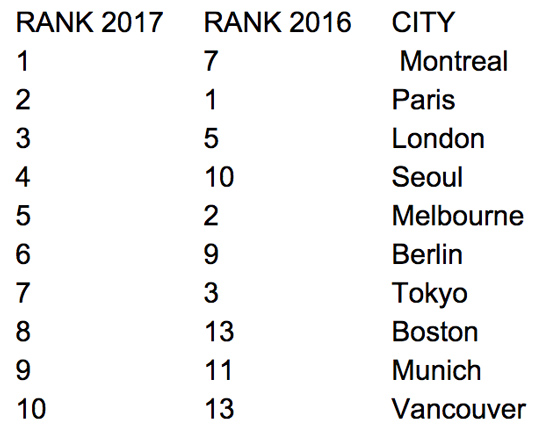 The top ten destinations as ranked in the QS Best Student Cities 2017, with the 2016 ranking for each indicated as well. Source: QS

A related news item in The Independent adds that this suggests “the country is holding its place against international rivals despite negative projections in the wake of Brexit. Eight British cities made the top 50 this year – with Edinburgh rising to from 33rd to 18th place, and Manchester moving up 13 places to 23rd.”

Analysts attribute most of those gains to improved affordability scores for British cities across the board, owing to a post-Brexit weakening of the pound against the US dollar and other major currencies.

On the other side of that coin, poorer scores for affordability led most US cities to fall down the table. Ten of the twelve included American cities dropped down the ranking this year, leaving only one – Boston – among the top ten.

Similarly, all seven ranked cities in Australia fell down the table this year, with Sydney going from fourth to thirteenth, and Melbourne – the country’s lone top ten entrant – falling from second to fifth. “All Australian cities on the ranking dropped in position primarily due to poorer performance on its affordability indicator,” said The Australian. Noting that Melbourne’s ranking was particularly affected by “soaring rents and accommodation costs.”

QS notes, however, that Australian destinations continue to score high on its “Desirability” ranking factor, a measure that reflects global indexes for liveability and safety, as well attractiveness to international students.

All told, the QS ranking rolls up scores from six ranking factors to arrive at a combined score for each of the 125 cities in the table.

For more on destination attractiveness and affordability, please see:

US community colleges stepping up international recruitment
New study highlights shifting patterns of African student mobility
What makes international students happy? Research shows the answer depends in part on country of ori...
East Asian students are most likely to hire agents, study finds
Outbound mobility from Kazakhstan up 140% over past decade
How will the Indian rupee’s slide affect your recruitment strategy?
Five for Friday
Field report: demand for education up sharply in Uzbekistan