Australia’s international student enrolment hit a new high in 2016 to reach a total of 554,179 for the year. The latest data from the Australian Department of Education and Training reports this as a 10.9% year-over-year increase from 2015, against average annual growth of 6.5% per year over the past decade.

More than four out of every ten of those students (43%) were enrolled in Australian higher education, which saw overall growth of 13% for the year. The next-largest sectors were vocational education and training (VET), with 26% of all enrolment and nearly 12% growth for the year, and English Language Intensive Courses for Overseas Students (ELICOS) which accounted for 21% of all foreign students and 4% growth. 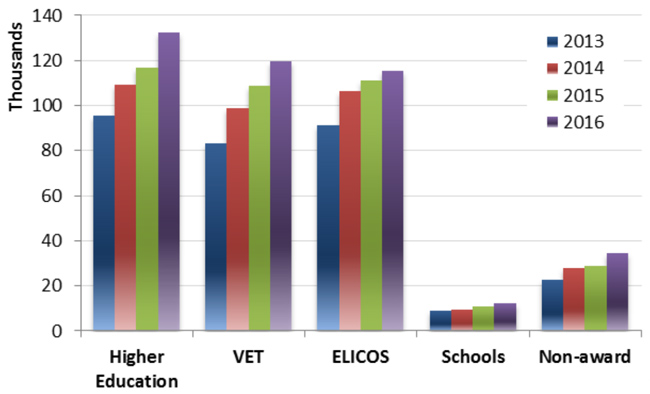 “With record student numbers and record student satisfaction, 2016 was a ‘gangbuster’ year for international education in Australia and the vital role it plays in our national economic and social prosperity,” said Australia’s Minister for Education and Training Simon Birmingham. “In 2016 preliminary export data shows international education exports hit a record AUS$21.8 billion, making it Australia’s third largest export after iron ore and coal.”

As the following table reflects, Australia’s top five sending markets accounted for just over half (51.3%) of all foreign enrolment last year. Indeed, the top two source countries – China and India – sent nearly four out of every ten foreign students in 2016.

While Australian educators saw China book another strong year of growth last year, it was the emerging markets that generally demonstrated faster year-over-year growth. Just outside of the top five were Brazil and Malaysia, which grew by 19.6% and 18.2% respectively. Two other emerging markets also recorded notable bumps for 2016: Nepal, which grew by 15.9% to reach nearly 23,000 students and Colombia, up 22.4% to 17,190.

Nine out of ten agree

News of Australia’s record year comes on the heels of the recently released 2016 International Student Survey. The Government of Australia commissions the survey every two years and the 2016 edition drew the largest response ever with 65,696 students participating.

The headline finding for this year is that nine out of ten students (89%) say they are “satisfied” or “very satisfied” with their experience of living and studying in Australia.

Nearly three quarters (74%) said that Australia was their first choice or overseas study with most indicating the that reputation of Australian education and personal safety and security were among the major factors in their choice.

The survey report draws two important points of comparison to other data sources. First, the 2016 results are contrasted with those from the 2014 survey, and the indicators there show that student satisfaction levels are marginally higher in the latest study (as reflected in the chart below).

Student satisfaction levels for the 2016 survey, compared to 2014. Source: Australian Department of Education and Training

Drawing on data from the International Student Barometer panel, the report also contrasts the student satisfaction rates for Australia with those for the US, Canada, UK, and New Zealand. It finds that students in other major English-speaking destinations exhibit similar levels of satisfaction with their experience of study abroad as do students in Australia (87.4% for Australia, an average of 87.3% for students in other destinations). However, Australia scores marginally higher on the students’ experience of living abroad (89% for students in Australia, 87.3% for those in other countries).

For more on recent-year trends in Australia, please see: