China is the latest major study destination to signal its growing interest in burgeoning international student markets in Southeast Asia. The Indonesian news agency Antara reported recently that there are currently 68,000 students from Southeast Asia enrolled in China, and that the Chinese government aims to build that enrolment base to at least 100,000 in the coming year.

China has clearly indicated its intention to strengthen education links with the region with high-level education missions, the convening of major educational forums between Chinese and Southeast Asian educators, and, earlier this year, the opening of the first-ever Chinese offshore campus in Kuala Lumpur.

The Jakarta Post quotes a recent public lecture by ASEAN-China Center Secretary-General Yang Xiuping in which Ms Yang said, “Foreign students from Southeast Asian countries are the bridge and future of the relationship between ASEAN [countries] and China. We want to see more exchange students from ASEAN countries in China.”

More recently, the eastern Chinese province of Jiangsu has launched a three-million yuan (US$450,000) scholarship fund to help attract ASEAN students to the province’s higher education institutions. Other regions within China, such as the province of Guizhou and the Guangxi Zhuang Autonomous Region, already have similar programmes in place.

The broader context for China’s expanded recruitment in the region is a key economic policy known as “One Belt, One Road” (OBOR). An invocation of the traditional Silk Road trade routes between Asia and Europe, OBOR aims to leverage China’s massive production and financial capacity through new projects and partnerships throughout Asia, Europe, and Africa – including markets throughout Southeast Asia.

The OBOR framework also reflects the growing economic ties between the region and China (Southeast Asian exports to China have more than doubled since the year 2000), and stronger diplomatic links as well.

The region has a combined population of 600 million people, and a middle class that will exceed 100 million by the year 2020. Steady economic growth, and large college-age populations that will expand notably in the coming decade, has put Southeast Asia firmly on the radar of international educators the world over. Indeed, we find some of the world’s most important emerging markets for international student recruitment within the ASEAN membership.

There were roughly 300,000 Southeast Asian students studying abroad in 2013, suggesting that the region likely accounts for something on the order of 7-8% of the world’s internationally mobile students today. Within the ASEAN group, Vietnam, Malaysia, Indonesia, Thailand, and Singapore are the major sending markets.

Major destinations for ASEAN students include Australia (which attracts roughly a quarter of all outbound students from the region), the US, the UK, and, increasingly, China.

China is of course the world’s biggest sending markets for international students, with an estimated 120,000 Chinese students studying in Southeast Asian destinations in 2015. But it has also increasingly emerged over the past decade as a leading study destination in its own right.

By some estimates, China is now the third-largest study destination in the world, after only the US and the UK. This ranking might hold true in an analysis that looks only at higher education enrolments. But once vocational or further education training, language studies, and secondary school enrolments are factored in, overall enrolment in other leading destinations – notably Australia and Canada – remains considerably higher than in China.

Even so, China has seen substantial growth in its foreign student enrolment over the past decade with average year-over-year increases of 10% between 2006 and 2015.

As the following chart illustrates, annual growth rates have slowed over the past few years, but the overall trajectory of foreign enrolment in China is nevertheless very impressive. China’s ten-year average annual growth of 10% outstrips the gains of other major study destinations over the last ten years – including the US (6% average growth), the UK (3%), Canada (8%), and Germany (3%) – and has put the country on track to meet its stated goal of hosting 500,000 international students by 2020. 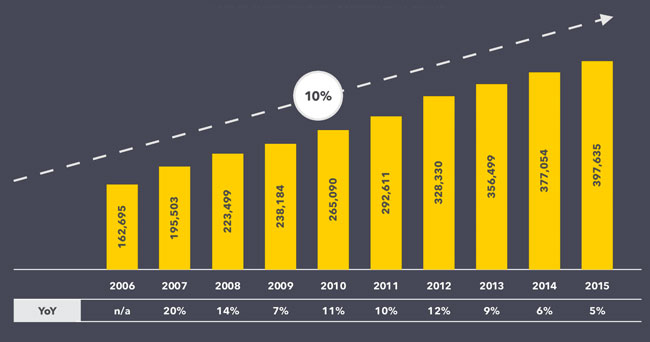 And as the recent case of Jiangsu province illustrates, Chinese governments are also expanding their investment in scholarship programmes for foreign students. A recent report from Student.com highlights that the number of scholarships available to foreign students in China has increased nearly 500% over the past decade.

For additional background on China as a study destination, please see:

This entry was posted in Asia, China, Regions.