France is lagging behind in transnational education and needs a new national strategy to expand its market share of higher education programming abroad. This is the central conclusion of a new report from France Stratégie – formally the General Commission for Strategy and Foresight (CSPF) – a central planning agency attached to the Office of the Prime Minister.

The report, L’enseignement supérieur français par-delà les frontières: L’urgence d’une stratégie (“French Higher Education Across Borders: The Urgent Need for a Strategy”), was published on 26 September and presented the same day to Minister of Foreign Affairs and International Development Jean-Marc Ayrault and Minister of State for Higher Education and Research Thierry Mandon.

Roughly 40% of France’s transnational education (TNE) enrolment is in Asia, another 30% in Africa, and 20% in the Middle East. And nearly half of the students enrolled in French TNE programmes are found in five countries: China, Lebanon, Morocco, Vietnam, and India. Indeed, much of France’s current TNE activity is concentrated in countries and regions where it has a former colonial interest or other strong historical ties. 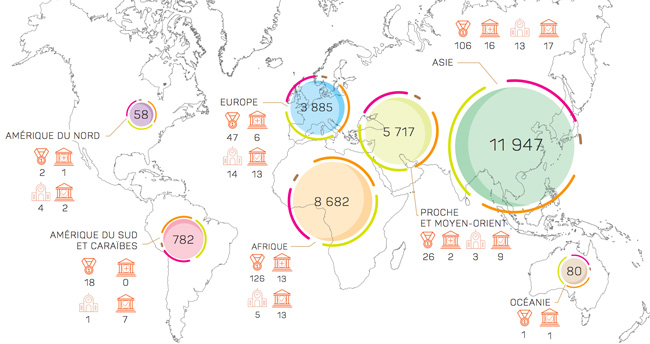 Further, most of France’s TNE programming – about 70% – is at the master’s level (or other postgraduate programmes), and most, again about 70%, is delivered entirely in French. The country’s engineering schools are among the most active institutions abroad, followed by French business schools.

The report notes, however, that most of this TNE activity arises from French institutions responding to opportunities abroad, and often at the initiative of faculty, or even French diplomats, rather than from “true articulated strategies” at an institutional level.

French institutions, the report concludes, tend not to place a high priority on this aspect of internationalisation, and also lack the autonomy and professional capacities to do so.

France Stratégie draws direct comparisons with the Australia and the UK, both of which have considerably larger TNE footprints. Australia, the agency says, provides TNE programmes for more than 111,000 students currently, including nearly 26,000 distance students. TNE enrolment in the UK, meanwhile, surpasses 200,000 students, including nearly 110,000 in distance learning.

While not specifically addressed in the report, the further bit of context here is that both Australia and the UK have clearly signalled their interest in expanding their respective TNE activities. Australia aims to do so in the context of its recently released national strategy for international education. The UK, partly in response to more restrictive visa policies for inbound students and now more recently in the wake of the Brexit vote to exit the EU, continues to place a greater emphasis on TNE programming.

The implication in all this is clear as the authors conclude that France is lagging behind its international competitors in TNE programming. More to the point, they argue there is a national interest in expanding the international programming of French universities as a means of advancing French diplomatic and trading links abroad.

To that end, the report proposes three distinct contributions for the French government, including:

However, a related commentary in University World News from François Therin, the director of the Ecole de Management Leonard de Vinci in Paris, adds some practical considerations from the perspective of French institutions.

“Many French higher education institutions are now following the path taken by UK or Australian universities but without the same resources,” he notes. “UK and Australian institutions mainly went abroad to source students (incoming or in-country) because they lacked financial resources. They were hungry. French institutions, comfortably established in their national market, did not feel the need for extra resources…It is only very recently, now that the national market has become more difficult and more competitive and now that public money is scarcer than ever, that [French institutions] realise that international expansion (in countries, online, etc) is the main way to increase their budgets.”

Mr Therin adds that most institutions nevertheless lack the resources needed to invest in market development abroad, and this is perhaps where one of the areas of state action identified in the France Stratégie report – reform of funding models and greater flexibility in pricing and financial arrangements – may especially come to bear.