The number of international students in Germany increased by nearly 7% between 2014 and 2015. This marks a sixth straight year of growth, a third year in which enrolment grew by more than 6%, and overall growth of 32% over the past decade.

In Wissenschaft weltoffen kompakt 2016 (“Facts and Figures on the International Nature of Studies and Research in Germany”) the German Academic Exchange Service (DAAD) and the German Centre for Higher Education Research and Science Studies (DZHW) highlight that the number of foreign students increased from 301,350 in 2014 to 321,569 last year. As always, the two agencies are reporting on two distinct categories of students within that overall count: Bildungsinländer (students of other nationalities who completed secondary school in Germany) and Bildungsausländer (those that completed their secondary studies outside Germany).

Interestingly, nearly nine of ten foreign students who completed their qualifying studies outside the country are studying towards a degree at a German institution. 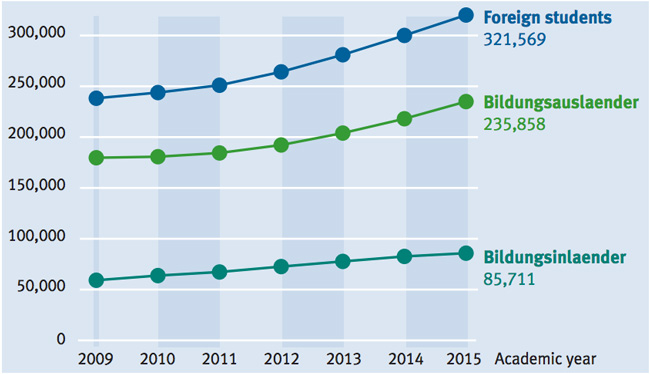 These topline numbers for 2015 put Germany comfortably on pace toward its longer-term goal to host 350,000 foreign students by 2020. They also secure its position among the top six study destinations worldwide, after only the US, UK, Australia, China, and Canada. In fact, another recent trends study from India’s M.M Advisory Services forecasts that Germany may soon overtake the UK as the leading study destination in Europe.

“Last year, [Germany] attracted a lot of attention globally when it announced an initiative to waive off tuition fees for international students,” says M.M. Advisory. “That’s made many students, especially in high-cost countries including the US, to start evaluating Germany as a serious option for international education. Based on the past three years’ momentum, and the smart initiatives being rolled out to attract students, we are projecting that Germany will overtake UK and become the international education leader in Europe in the next five years.”

The report refers broadly to a number of factors that have boosted Germany’s attractiveness in recent years, including the increasing number of English-taught programmes at the master’s level, low (or even no) tuition fees, and strengthened post-study work rights for international students.

Stable sources, but India on the move

As the following chart illustrates, the global distribution of foreign students in Germany remained fairly consistent relative to 2014. 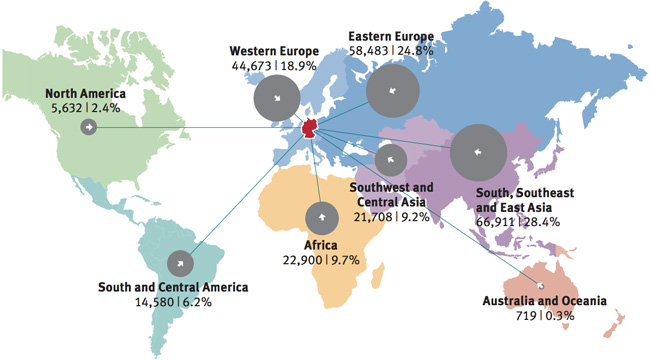 Bildungsausländer in Germany, by region of origin, 2015. Source: DAAD, DZHW

The main change that we can observe is that the percentage attributed to South, Southeast, and East Asia is slightly higher in 2015 (compared to 2014) and the proportion for Eastern Europe has declined slightly. This shift is largely accounted for by a nearly 25% increase in Indian enrolment in 2015. That increase, from 9,372 students in 2014 to 11,655 last year, also saw India move into the number two spot among the top 20 sending markets for Germany, shading past Russia which moved down a spot to hold third place in the table for 2015.

As the following graphic reflects, however, Germany’s international enrolment is impressively diversified. China remains the leading source country, accounting for nearly 13% of foreign students who completed secondary school outside Germany. But after that lead position, the enrolment becomes quite widely distributed indeed, and stands in sharp contrast to the more highly concentrated enrolments in other leading study destinations around the world. 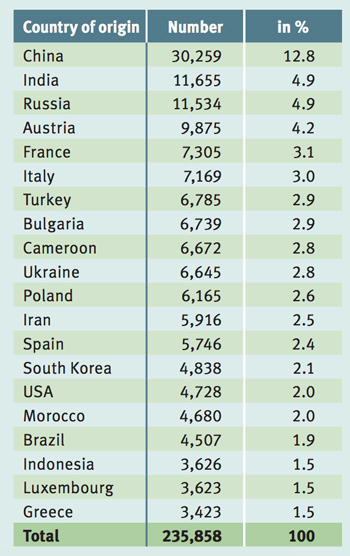 Bildungsausländer from the top 20 countries of origin, 2015. Source: DAAD, DZHW

In terms of level of study, there was a slight shift in 2015 in favour of post-graduate degrees (32.6% of foreign enrolment rather than 30.3% in 2014), but the proportion of students in undergraduate studies remained fairly consistent as well (roughly 34-35% over the two years). Overall, foreign students represented just under 12% of total higher education enrolment in Germany last year.

This entry was posted in Europe, Germany, Regions.