China is projected to surpass the US as the world’s largest economy by 2028, and a new study this month from the McKinsey Global Institute (MGI) paints a vivid picture of just how much Chinese consumers will factor in the global economy in the next 15 years.

MGI projects that global urban consumption will grow by US$23 trillion between 2015 and 2030 (a 3.6% compound annual growth rate). And Urban World: The Global Consumers to Watch highlights that there are nine groups of urban consumers worldwide that are projected to drive urban consumption growth from 2015 to 2030.

In fact, three of those groups – retiring and elderly in developed economies, North American working-age consumers, and China’s working-age population – will generate half of the projected growth in consumer spending all on their own. In the view of the report’s authors, the significance of these groups cannot be overstated. Together, the report notes, they have “the scale and spending power to reshape global demand and the world economy.”

The importance of these key consumer groups arises in part from some related macro trends in the global economy. Until the start of this century, increases in global consumption were largely driven by population growth. But population growth is slowing now around the world and, looking ahead through 2030, increasing populations will only account for about 25% of projected global consumption growth. The rest will come from higher levels of per capita consumption, especially among the key consumer cohorts noted above.

“Over the 50 years to 2014, the global population grew at an annual rate of 1.4%, more than doubling the number of people in the world, from 3.4 billion to 7.2 billion,” says the report. “But over the next 50 years, the annual rate of growth is expected to slow to only 0.4%…The fertility rate in many countries is falling below the ‘replacement’ threshold of 2.1 children for each woman that is necessary to keep the population stable. Current projections suggest that, worldwide, one million fewer babies will be born from 2015 to 2025 than in the previous ten years.”

In other words, over the next decade or two, real growth in consumer spending is going to increasingly come from each individual spending more.

Their combined spending is projected to increase from US$2.5 trillion in 2015 to US$6.7 trillion in 2030, an increase equivalent to about 18% of the total global increase in consumer spending projected by MGI. Put another way, this burgeoning group will account for roughly 12 cents of every dollar of worldwide urban consumption by 2030. The report adds, “China’s working-age individuals today have higher disposable incomes than their parents have…These consumers are so numerous and their incomes rising so rapidly that they have the potential to reshape global consumption as the baby-boomer generation of the West – the richest generation in history – did.”

As these broad patterns of income and spending growth would suggest, the other trend at work here is that a very large number of Chinese households will enter the middle class by 2030. The total proportion of Chinese urban working-age consumers with middle class levels of disposable monthly incomes is expected to increase from 4% in 2010 to more than 50% by 2030. And the research is fairly clear that this is a cohort who aims to spend more as its income increases. “These consumers have grown up in a very different China from their parents,” says MGI. “And their consumption choices reflect this. They are more optimistic about their financial future and more willing than previous generations to spend a greater share of their disposable income…By 2030, members of this group will have lived their whole lives in post-reform China.”

Nearly 19 million of China’s working-age consumers live in Shanghai. Another 17 million are in Beijing. But, as the following illustration reflects, the greater proportions of working-age Chinese are to be found in the major manufacturing centres of the south, such as Dongguan, Foshan, Guangzhou, and Shenzhen. 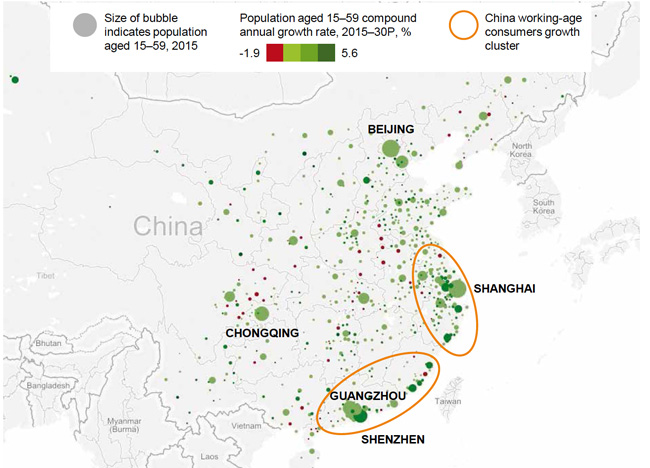 Reflecting the increasing openness and willingness to spend of China’s working-age population, the China Outbound Tourism Research Institute projects that an additional 100 million Chinese will travel abroad by 2020. Also of particular note for international educators, MGI projects that education will claim a significant share of increased spending through 2030. “Between 2015 and 2030, China is expected to spend 12.5% of overall consumption growth on education for those under 30 – a higher share than in any other country in our sample, save Sweden, the country with the largest share at 12.6%.”

And younger Chinese – raised under the country’s one-child policy – have also benefitted from the expansion of consumer spending across the working-age cohort. Per capita consumption up to the age of 29 is higher in China than in any other country, reflecting in part that parents with a single child are able to devote more resources to that one son or daughter. Even so, a lot of that spending power is concentrated on education. On average, education spending makes up nearly half of the per capita consumption of a 20-year-old in China, as opposed to less than 25% in the US.

To be clear, the further forecasted increases in educational spending through 2030 include all manner of education services, including education technology, school fees within China, and study abroad. But the overarching trends that we see here, particularly income growth and a further expansion of the middle class, bode well for the country’s continued prominence as a key international education market.

“China’s working-age consumers are poised to define the shape of global consumption in the years to come, just as Western baby boomers did before them,” concludes MGI. “They are enjoying sharp income growth, are confident about their financial future, and – in contrast to generations of Chinese that preceded them – are willing to spend more of their earnings on services, premium brands, and technology.”