Is online messaging the next big thing for student recruitment?

Have you already mastered Google keywords and hammered out a great social media strategy? If so, fantastic! But, as you would probably guess, there is more to be done in the quickly evolving digital marketplace. Important new mass communication channels are taking shape and recruiters are starting to take notice.

Online messaging has emerged as the new social network, and the sheer size of the rapidly expanding audiences on major chat platforms – including market leaders such as WhatsApp, Facebook Messenger, and China’s WeChat – is hard to overlook. Business Insider reports that the global user base for the seven largest chat apps grew by 148% (or about 900 million users) between March 2013 and March 2014 alone.

That combined user base is now counted in the billions. Juniper Research estimates that, by 2018, 75% of all mobile messaging will be instant messages, and the closely watched Internet Trends report from Kleiner Perkins Caufield Byers (KPCB) notes that six of the ten most-popular apps in 2015 were chat messaging apps. eMarketer predicts that by 2018, the number of chat app users worldwide will represent 80% of smartphone users. Last year, The Economist reported that, “In Britain users spent as much time on WhatsApp as on Facebook’s social-networking app…In China subscribers to WeChat are estimated to use the app for about 1,100 minutes a month on average.”

Where has this massive user base come from, and how did it arrive so quickly? Part of the story here is the mainstream global adoption of mobile devices. Interestingly though, as much as mobile channels have expanded in recent years, online messaging has grown more quickly still.

A recent report from the Tow Center for Digital Journalism offers a compact history: “As smartphones began to proliferate, messaging apps were an increasingly accessible solution to a simple problem: SMS [that is, conventional mobile text messaging] is expensive in most countries, so why not text or call much more cheaply, or for free, via the mobile web?

SMS volume peaked in 2012, and chat apps surpassed SMS in global message volume for the first time in 2013. By January 2015, WhatsApp alone hosted 30 billion messages per day compared to about 20 billion for SMS. As Wi-Fi and high-speed mobile networks hit critical mass in many markets, chat apps quickly became multimedia hubs where users could easily share videos, photos, stickers, games, articles, live streams, and more. Between 2013 and 2014, many messengers turned their attention to monetising their massive audiences, and in doing so introduced tools for publishers and brands.”

A guest post on the MobileFOMO blog adds that mobile chat apps are especially popular among “younger, raised-on-mobile-phones teenage audiences. Younger users tend to view legacy communication formats (email, phone calls, even texts) as old-fashioned, time-consuming and even a bit clunky in the mobile environment.”

WhatsApp and Facebook Messenger – both owned by tech giant Facebook – are the leading global chat apps. WhatsApp has more registered users globally but Global Web Index reports that Facebook Messenger is more heavily used (at least outside of China) with four in ten Internet users using Messenger each month as opposed to the one in three that use WhatsApp. 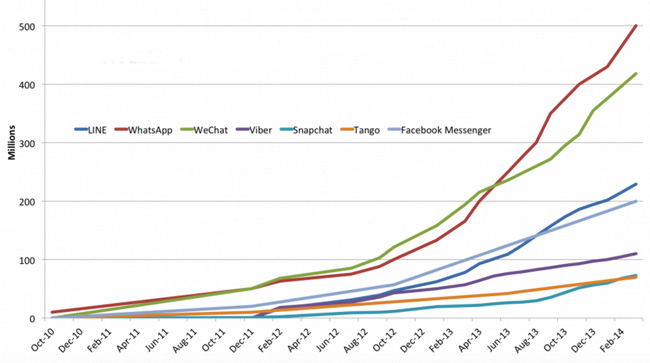 Global monthly active users for top messaging apps through February 2014. Source: Business Insider. Readers will note the “outside of China” qualification in the text above. Within China, WeChat is by far the dominant platform. It counts an estimated six of ten Chinese Internet users in it user base and effectively functions as a mobile web portal in this key market. Also of note related to the chart above, WhatsApp’s monthly active user base is estimated to have roughly doubled again in the two years between February 2014 and February 2016.

However, WhatsApp continues to build its user base very quickly indeed and Statista has the platform’s global base of monthly active users at one billion as of February 2016. Further, WhatsApp is the top message app in 16 of the 34 countries tracked by Global Web Index, including India, South Africa, Malaysia, Spain, and Mexico. And its users are very heavily engaged with six of ten “WhatsAppers” using the service several times per day.

The Tow Center for Digital Journalism adds, “One of the key reasons for [WhatsApp’s] dramatic, global uptake is the free alternative it provides to expensive SMS charges that exist in many parts of the world. In addition to text messages, it can also facilitate voice memos, images, and video clips – and, most recently, Internet calls…Another big factor in its huge, global success is the simplicity of the app itself. Once downloaded, it scans a user’s address book and immediately lets him or her communicate with any personal contacts already on WhatsApp. It doesn’t require the creation of a username or password – an impediment which remains a significant barrier to entry for many people in emerging markets when it comes to other apps and social media platforms.”

All of which underscores ease of use as one of the signature elements of chat apps. Messages and content are delivered freely within the app with no fees or limits from carriers. And communication is frictionless, fast, and accomplished with nothing more than a few taps on the screen.

The size of the audiences now using online messaging apps, and the amount of time that users spent on such services, has led investors to value them highly and has drawn considerable attention from media and marketers as well. As in the early days of social media, however, the strategies and practices for reaching target audiences via online messaging are still taking shape.

Part of the challenge is the fragmentation of the space. There are the globally dominant apps, such as WhatsApp or Messenger, but that global heft breaks down on a market-by-market basis where niche or national players may also have a leading role. New apps are coming into the market all of the time and across the field each has its unique features and capabilities. They support various combinations of text, videos, and images. Others more closely resemble social networks by allowing users to “like” or follow other users. And still others have advanced geo-targeting capabilities that allow broadcast messages to users within a certain radius.

As with the early periods of search or social media marketing, the key for many recruiters will simply be to make a start: to experiment, to learn, to listen, and to gain experience on these important, emerging platforms over time.

That said, some of the lessons that have been learned on social media can certainly be applied to online messaging channels as well. For example: 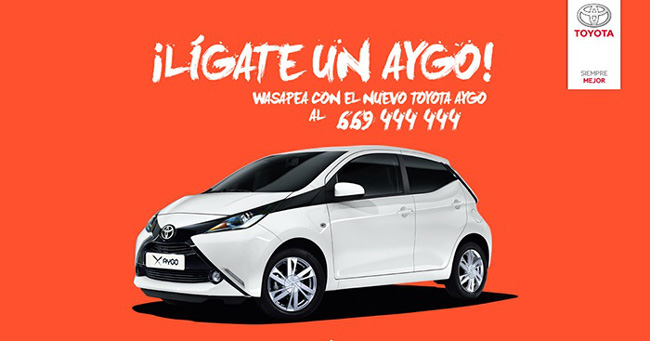 “Toyota Spain built a fun ‘flirting competition’ campaign on WhatsApp to drive the launch of its new car, the Toyota Aygo. The campaign encouraged users to “woo” the new Toyota Aygo car (for a chance to win one of their own, with the winner announced on Valentine’s Day) by sending private messages to Toyota Spain with their best cheesy one-liners, memes, pictures, audio messages and videos…Toyota still had to rely on the reach they had on social media in order to drive traffic to the WhatsApp campaign in the first place. Potential fans heard about the campaign from Facebook and other promotions that gave them Toyota’s WhatsApp number.”

The Toyota example, as with so many others, looks at how you can introduce a targeted campaign within a major messaging service. Some marketers, however, are stepping around the constraints of the major chat apps (notably WhatsApp with its 256-user limit on broadcast lists) by creating their own proprietary chat platforms.

We are beginning to see the first of these in international education, a notable example of which is the Admission Table app developed for Android devices and focused on the burgeoning Indian market. Counselling and advisory services are provided within the app, along with some additional telephone support at later stages of the process, and Admission Table and its client universities have ready access to the growing audience of students around the service.

As these early examples suggests, online messaging services offer a chance to connect with a highly engaged audience in new and innovative ways. The trick for many marketers will now be to figure out how to capitalise on that opportunity and to work effectively in this new, mobile, on-the-fly context.